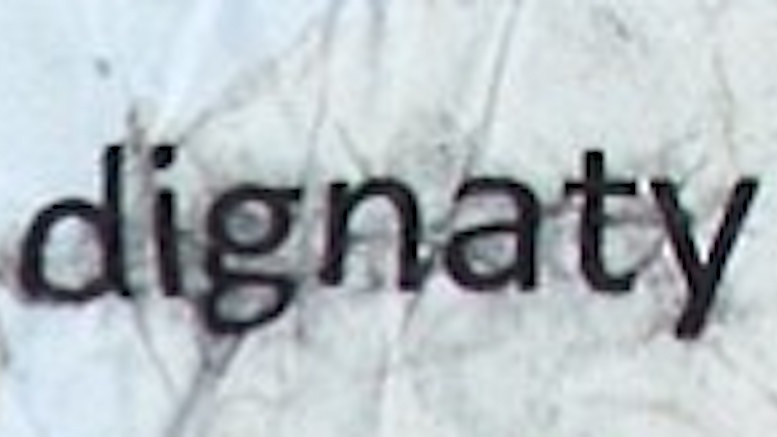 Reuters reports that a 55-year-old British woman has pleaded guilty to attempted murder for trying to poison her husband on Christmas Day 2013. A judge sentenced Jacqueline Patrick to 15 years in prison, and the couple’s daughter got three years for “encouraging” her to do so.

The holidays can be a stressful time, but hopefully you can give thanks this week that your whole family probably won’t try to murder you.

The elder Ms. Patrick called paramedics on the morning of December 26 to say her husband was seriously ill. He was either unconscious or nearly so when they arrived (reports say he was in a coma, but it may have been medically induced later). His wife did not appear to be too optimistic, based on this note she gave them on the spot: 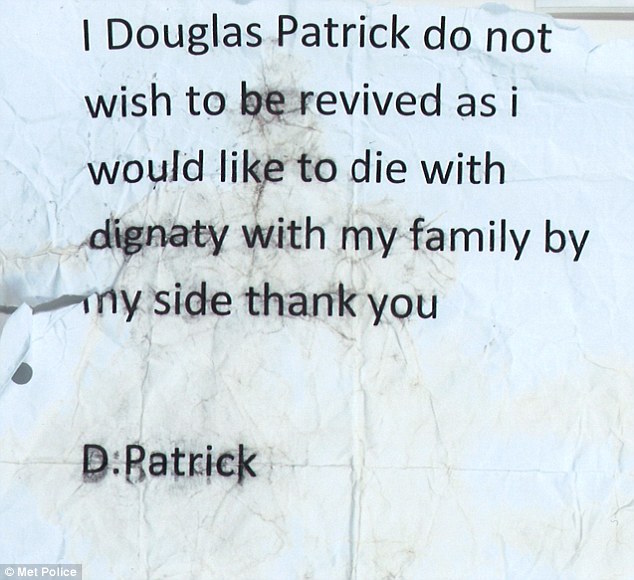 The reports vary as to the exact sequence of events in the investigation that followed and what was the first thing to trigger suspicion. Some say it was the tests showing antifreeze in Mr. Patrick’s system. Some say it was his wife’s reaction to that information, which was to say that, now that you mention it, she “thought he might have drunk a blue liquid by mistake.” (She spiked his drinks.) But after seeing the note itself, I’m going to speculate that the first person to get suspicious was a paramedic who glanced at the note and then, moving only his eyes, looked back up at Ms. Patrick with an expression that in most cultures is recognized as the equivalent of “Really?”

If you’ve read my disclaimer, and of course you have, you know that nothing I say here constitutes legal advice. I will say this: you should have an advance health-care directive that explains your wishes in the event you cannot speak for yourself. Beyond that, I guess I will keep the disclaimer in place though I think these are some pretty solid tips:

All the reports agree that the note’s request for death “with dignaty” contributed to the unraveling of this master plan. Reuters’ headline suggests this is what got the ball rolling, but the report quotes a police statement saying the hospital called them after “finding it strange that she hadn’t volunteered [the blue-liquid] information earlier.” It is clear the misspelling contributed, because “[w]hen police later asked her to write the word, [she] made the same mistake.” Man, if you’re gonna fabricate written evidence, at least look up the words you’re using.

He feels sick again I gave him more delete this

—that could be viewed as incriminating.

This goes a little beyond what you could blame on autocorrect.

Also, in terms of planning, if you are going to explain an internet search history that includes “antifreeze poisoning” by saying that your friend’s dog once accidentally drank some and you were trying to help, you should give the name of a friend who actually owns a dog, or at least has owned a dog at some time in his or her entire life. Because police may very well find that friend, and ask.

Finally, you might be wondering why the defendants did this. Good question. At sentencing the prosecutor noted this was a “concerted plan” and “persistent attempt” to commit murder (they had tried the year before, too). “Who can say what the reason was?” he said. Well, often the prosecutor can, but I guess not in this case. Earlier reports said the defendants had accused the father of being abusive, but by the time of sentencing any “allegations about [him] being abusive or violent had been dropped.” Even if they were true, of course, this was not exactly a self-defense killing. But none of the reports I’ve seen suggest that they were true. The only other motive suggested is D. Patrick’s dislike of the girl’s boyfriend, but I guess the guilty plea (and extensive evidence) meant the prosecution didn’t need to articulate a motive.

This is probably not the worst murder plot ever plotted, but I would rank it up there with Clyde Gardner’s plan to dress up like a bear in order to make it look like his ex had been killed by a bear. That plan was also in trouble from the very beginning, and in fact it didn’t get past step one: find a bear. This one involved more mistakes, but no bears, so, take your pick.

Second “Duct Tape Bandit” Seems to Have Learned From the First

Superheroes Must Be Able to Do Five Pull-Ups, Group’s Leader Says