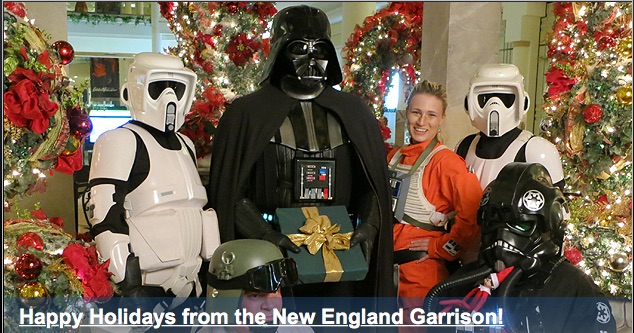 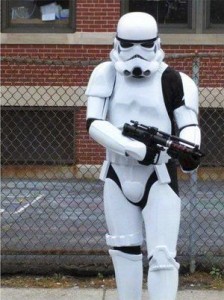 They can’t hit anything anyway

“The way things are today, you can’t have that,” said Lt. Rick Donnelly of the police squad in Lynn, Massachusetts. I thought he was talking about common sense, but it turns out what you can’t have is an Imperial Stormtrooper costume.

At least, you can’t have one that comes with a blaster (and I assume they all do) while you’re within 1,000 feet of a school in Lynn, Massachusetts. Because of course what happens next is that, out of an abundance of caution, someone will call the police to report a “man with a gun,” even if what they’re actually looking at is just a dork with a fake blaster.

Of course, members of the Can’t Be Too Careful Club will argue that if you see someone near a school who’s carrying a weapon, it’s better to be safe than sorry. You never know—he might be carrying an actual 21st-century gun and planning to attack the school with it. Could be.

Although based on the the other cases I’ve read about, people who do that kind of thing generally don’t do it in costume, let alone a costume made of shiny white plastic that can be seen from a galaxy far, far away. Just because the Empire (sorry, I mean “First Order”) is dumb enough to have its soldiers wear stuff that is both ineffective and easily seen doesn’t mean real-life thugs are likely to do that. Maybe more to the point, the caller admitted that she “thought the gun might be plastic”—most likely because she was looking at a guy in an Imperial Stormtrooper costume—but because she wasn’t sure, well … you can’t be too careful.

Would I make that call if I were the principal of an elementary school? Maybe I would. But there are at least two reasons I might not.

First, risk is relative, and personally I think the risk that a guy in a stormtrooper costume is likely to be a real threat is pretty low for the reason I mentioned above. And while you’re focused on the Star Wars guy, maybe you don’t see the actual creep lurking near the playground, or maybe you just miss that kid running out in the street. Trying to guard against every risk, no matter how small, is counter-productive.

The other reason is that police have real guns with real bullets that kill real people. Including people with fake guns. For example, Tamir Rice, the 12-year-old who two cops shot dead after jumping out with guns drawn even though they had been told his gun was probably fake. This guy, thankfully, did not get shot. (Hey, maybe it is good to look white from a distance.) But he easily could have, and it’s not like that armor’s gonna stop anything. Also, police don’t always hit what they’re aiming at, which is another risk to take into account before you make a panicky call summoning people with guns to an elementary school.

But okay, so you make the call. Fine. And the police show up and don’t kill anybody. Great. And determine that the guy poses no threat. Super. And then they arrest him. What?

Yes, police arrested the stormtrooper and charged him with “disturbing a school” (or, presumably, the people in it) and “loitering within 1,000 feet of a school,” though if he was hanging around or doing something affirmatively disturbing, the report doesn’t say anything about it. Why not just check him out and tell him to move on? “Our feelings are that he was not there to cause harm to the kids,” Donnelly said—and since he was only carrying a fake blaster I’d say those feelings are valid—”but he used bad judgment.” Maybe that should be a crime in and of itself, but it isn’t.

THERE CAN BE ONLY ONE