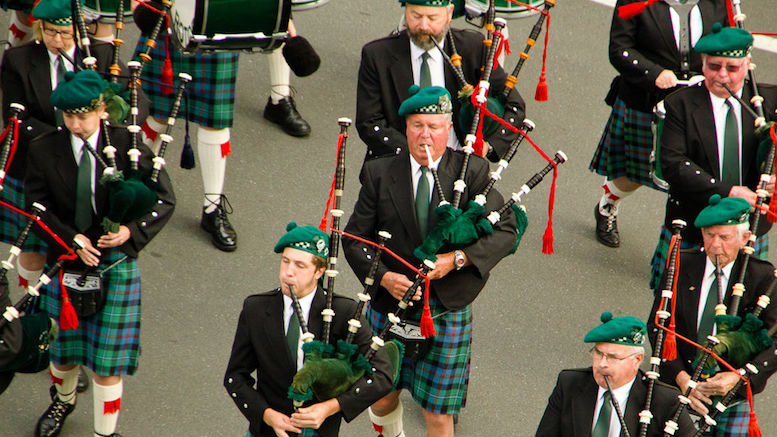 Since this happened in Scotland, I assume the bagpipes would not have been objectionable except that the performance was at four in the morning.

The pipers in question had performed at a wedding earlier that day (this was Valentine’s Day 2015), and were still in full Highland dress when they piped their way into a McDonald’s at approximately 3:40 a.m. The report doesn’t say what time the wedding had taken place, but I think nighttime weddings are relatively rare, so I’m guessing these gentlemen had been drinking for at least ten hours by the time of the incident. [Update: On the other hand, wedding receptions often go on into the wee hours, so that might not be fair.] It is at least clear that they were under the influence, according to Fiscal Depute Jim Eodanable.

“At around 3:40am a group of four arrived at McDonald’s at the same time as the accused,” Eodanable told the court last week. The accused were piping at the time. “One of the accused engaged in conversation with the other group and they formed a clear impression that he was under the influence of alcohol. One of the parties made a comment which was taken the wrong way and [Piper No. 1] punched the complainer. He falls to the ground and on the way down strikes his head off a seat in the booth.” The complainer’s friend stepped forward to help and was lightly punched by Piper No. 2. “Fortunately for all concerned the injuries were not serious.”

That all seems pretty straightforward, so the main unanswered question here may be, what the F is a “fiscal depute”?

It appears to be the equivalent of an assistant district attorney in the U.S., according to Scotland. What we would call a district attorney they call a “procurator fiscal,” and their assistants are “fiscal deputes.” According to Wikipedia, the title “most likely originates in the Roman-Dutch and French manorial or seignorial administrator (Dutch procurator-fiscaal, French procureur fiscal), who, as the fiscal in the title suggests, was originally an officer of the sheriff … with financial (fiscal) responsibilities: the procurator fiscal collected debts, fines, and taxes.” They have much broader authority now, so it makes sense that they would need some deputes. There are 11 procurators fiscal in Scotland and about 100 deputes.

Turns out that although they technically speak English (among other things) in Scotland, they have different words for all this stuff. (Can you believe it? Different countries have different words for things!) Different English words, I mean—for example, what we would call  “indictment” and “criminal procedure” they apparently call “precognition and management of solemn business,” which is superior by like an order of magnitude. We should start using that.

Anyway, after precognosing the bagpipers, the court fined them each £630. Seems like a lot for a bagpipe-related assault in Scotland but as the court noted, the injuries could have been worse.