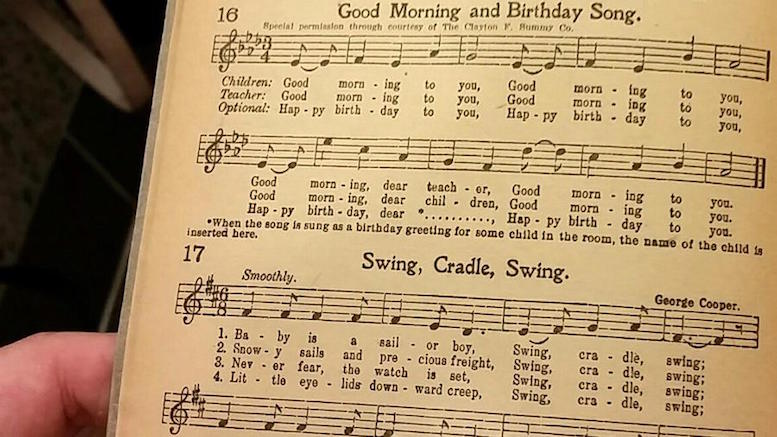 The song waiters have been irritating you with for decades (photo: Christine Mai-Duc / L.A. Times)

Great news for those of you who have been paying royalties every time you sing “Happy Birthday”—assuming the judge approves a proposed settlement, he will declare that the song is in the public domain, making it free for everyone.

Oh, you haven’t been paying royalties for singing “Happy Birthday”? Then I guess this is great news mostly for the plaintiffs’ attorneys, who would get $4.62 million under the proposed settlement. Still, great news for somebody.

As I mentioned back in 2013, a documentary filmmaker sued Warner/Chappell after being charged $1,500 in licensing fees to use the song in the film. The complaint argued that the song has been in the public domain for a while now, and so Warner has been collecting royalties improperly. (Allegedly it has been making $1-2 million per year from this, so maybe the song is used in a lot of movies.) As is always the case, once a class action is on file a bunch of other people suddenly realize they, too, have been wronged, and so more cases were filed. In September, the judge ruled that Warner had not shown it had a valid copyright in the song. There were still issues left for trial, and the case had not yet been certified as a class action, but this obviously wasn’t good news for Warner.

According to The Hollywood Reporter, the parties reached an agreement in December, but the motion for approval of the settlement was filed on February 8. Why does a judge have to approve a settlement? Well, some claim that some purported class actions are settled on a basis that benefits the defendant (which avoids trial) and the plaintiff’s lawyers (who get fees) without really benefiting the class members on whose behalf the case was allegedly filed. I of course express no opinion about that in general. (But see this and this, if you like.) Is this one of those actions? Well, that’s hard to say.

Mainly because I can’t really tell who is in the proposed class:

It’s probably easier to say who isn’t in the class: you. Each of the named plaintiffs say they have personally paid a fee. Again, one of them paid to use the song in a movie; maybe the others did too, but that seems unlikely. (If they paid just so they could bring a lawsuit, that’s not allowed, but I have no evidence they did.) Obviously some corporate entities are in the class, along with some filmmakers and … I don’t know who else. Who else has been paying to use “Happy Birthday”? And are they similarly situated?

Troublesome questions like that can sometimes be avoided if there’s a settlement, although that itself is troublesome if the settlement is collusive and the class members, if any, get nothing. Is that happening here? Well, Warner has agreed to pay members of the settlement class up to $14 million—assuming they exist and submit claims, something most class members never do. The settlement also calls for a judicial declaration that “Happy Birthday” is in the public domain. Warner has already lost its right to collect royalties, basically, and nobody else has been charging them, so it’s not clear to me this declaration would add anything. It also seems to be a little unclear whether a judge can declare something to be public domain as a result of a settlement, but I don’t know. But this is “the most important aspect” of the settlement according to the motion, allegedly because, as a result, singings of “Happy Birthday” will absolutely skyrocket:

The judicial determination that Happy Birthday is in the public domain also has substantial value. Because Defendants have charged for use of the Song, untold thousands of people chose not to use the Song in their own performances and artistic works or to perform the Song in public. This has limited the number of times the Song was performed and used. After the Settlement is approved, that restraint will be removed and the Song will be performed and used far more often than it has been in the past. While there is no way to make a reliable estimate of the increase that will result, there can be no dispute that the increase will be substantial.

Please. Even if that were true, this is a good thing?

Well, okay, Plaintiffs did achieve something here. Somebody was paying to use the song, and would have paid in the future, and Warner can no longer charge fees it is apparently not entitled to collect. It also has to pay some amount of money to someone. So this is not an entirely worthless settlement.

But does it justify $4.62 million in fees? Because that’s what plaintiffs’ lawyers are asking for. That’s one-third of the $14 million that class members might receive. The case has been pending for a while and probably involved a fair amount of work; I’m not saying they shouldn’t get paid.

I am saying $4.62 million is an awful lot of money for freeing “Happy Birthday.”