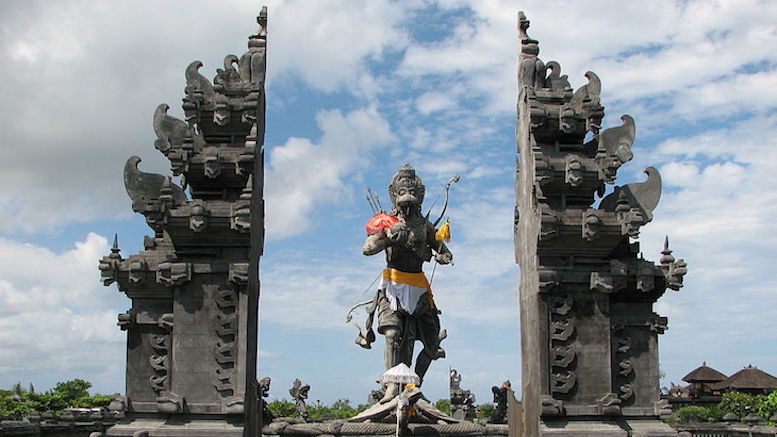 One of Lord Hanuman's many aspects

As I told the person who sent me this item, I enjoy reading headlines like “Indian court issues summons to Hindu monkey god Hanuman” and being able to respond, “Again?”

My brain, which has trouble keeping track of my car keys but is a steel trap for this kind of thing, instantly remembered this 2007 item in which Hanuman and Rama had both been summoned to testify in a property dispute involving a temple. (Turns out I have mentioned Hanuman at least three times, but the other two didn’t involve civil procedure, they were just monkey-related.) At first I thought maybe the new story was referring to the 2007 incident, but now it sounds like this sort of thing may happen a lot, actually.

This time, at least, it seems to have happened by mistake. According to The Guardian, the public-works department in Rohtas, a district of Bihar state, filed a complaint against a local temple to Hanuman that it says is encroaching on a road and obstructing traffic. The summons issued by the court apparently was addressed to “Hanuman” instead of “Temple of Hanuman” or whatever the temple is called. “The summons was meant for the temple management and not the god,” an official later had to admit, on the record. It will be re-issued. 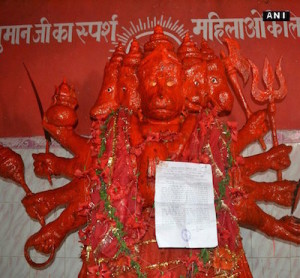 He/they does/do not look at all pleased (image: ANI News via Twitter)

Somebody stuck a copy of the summons on the temple’s statue of Lord Hanuman, as you can see here, but it’s not clear if this was the process server’s idea or if the temple workers did that in order to make fun of it. Either way, good photo.

According to other reports, something similar happened earlier this month in a different district of Bihar, when an official issued an encroachment notice against “Bajrang Bali,” which turns out to be another of Hanuman’s approximately one zillion names. This one apparently means something like “the strong one with limbs as hard as diamond.” That’s cool, but not as cool as some of these others listed in the Wikipedia article, such as (translated, of course):

at least three of which I am adding to my resume as soon as I finish this post. 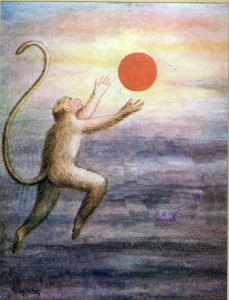 It’s hard to know how often people try to drag these deities into court, but I’m guessing it isn’t that rare. In addition to the three examples mentioned above, in early February a lawyer in yet another district of Bihar filed a lawsuit against Lord Rama and his brother Laxman, saying they had driven Sita into exile “without proper justification.” That one didn’t survive very long in court, although the plaintiff might have had a point. So that’s four legal proceedings involving deities in India, and I generally assume that if something has happened even once in India, it’s probably happened like eight million times there.

Of course, this sort of thing is hardly unique to India (see also, e.g., Nebraska), they just have lots more people and gods over there, so just statistically it probably happens a lot.

The same reports also note that in 2014, somebody frustrated with a different Indian state’s bureaucracy managed to get it to issue an ID card in Hanuman’s name, complete with a picture of the deity “wearing a crown and a string of pearls.” That doesn’t involve a lawsuit, of course, but it’s also good. To be fair, with something like 1.3 billion people to keep track of, this sort of thing is going to happen now and then, although you’d think it would be hard to miss an ID card with a picture of the mighty devotee ape of Rama on it.

“Is That a Rocket Launcher?”—Criminal Lawyer Reacts