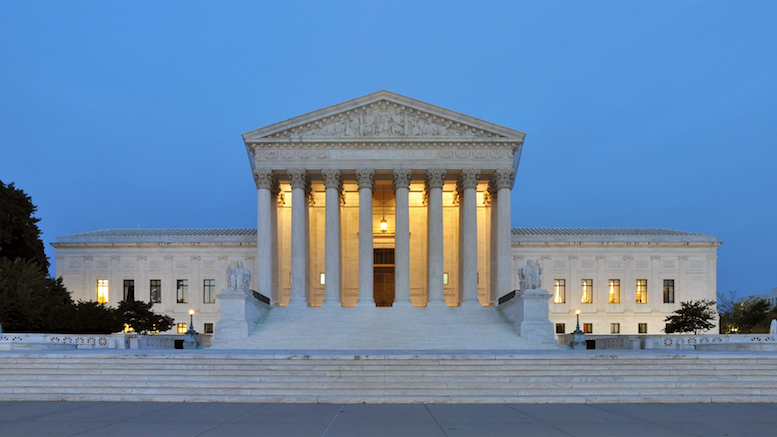 By now you know Justice Scalia has died. The death of a sitting Supreme Court justice is a rare event, at least in recent history, and no other justice (sitting or retired) has died since Justice Rehnquist was elevated in 2005. But that was before this website existed, so this is an unprecedented event in that very critically important historical sense. Clearly, there must be a retrospective.

Lots of other people have already written about Scalia’s judicial philosophy or conservative legacy or this or that other thing. All very significant. But to me it’s more important to make sure people know that (for example) he and Justice Ginsburg once rode around on the same elephant. So with that sort of thing in mind, here is an LTB-limited and therefore mostly trivial retrospective regarding Justice Antonin Scalia (1936-2016).

One thing no one can dispute about Justice Scalia is that he had a sense of humor. In fact, he  first appeared here way back in December 2005 after Prof. Jay Wexler declared him the Funniest Justice based on the number of times “(laughter)” appeared in the transcripts following something he said during oral argument. See “Study Concludes Scalia 19 Times Funnier Than Ginsburg, Infinitely Funnier Than Thomas” (Dec. 31, 2005). I believe Jay did a similar analysis every year with similar results, meaning that Scalia won by a big margin every year and Justice Thomas generated no “(laughter)” at all. (As of 2012, anyway; Thomas did generate one (1) laugh the following year.)

The only Scalia quips that seem to have made it into a post were two he made during FCC v. Fox Television (the case involving Bono’s F-bomb at the Golden Globes), including an apparent coinage of the term “gollywaddles” to show that the F-word is obscene regardless of context. “[You can’t] “use ‘gollywaddles’ instead of the F-word,” he pointed out to Fox’s attorney. (Laughter.) But there were many more. Granted, these statistics establish only that he was the funniest in a relative sense—specifically, relative to other Supreme Court justices during oral argument—but they are consistent with anecdotal evidence suggesting he was funny on a broader basis as well.

For example, and speaking of obscenity, I mentioned in 2006 that Justice Scalia had been unfairly charged with making an obscene gesture toward a Boston Herald reporter who asked him whether he could be impartial on church-and-state issues (he caught Scalia just after attending Mass). As he later wrote in a letter to the editor, “from watching too many episodes of the Sopranos, your staff seems to have acquired the belief that any Sicilian gesture is obscene….” This one, in fact, was merely “dismissive”: “The extended fingers of one hand moving slowly back and forth under the raised chin [the gesture he had deployed] means ‘I couldn’t care less.  It’s no business of mine.  Count me out.'” I have no idea whether that’s true or not (he did cite authority), but I think the letter is pretty funny.

It’s much harder to be funny in a written opinion, of course, but Justice Scalia did that sometimes, generally in dissent when blasting the majority for reasoning he thought was nonsense. Or, as he once called it, “pure applesauce.” I assumed that one was another “gollywaddles,” but it turned out to be an existing (if dated) slang expression for “nonsense.” This was something he was very fond of, or at least he did it repeatedly in recent years. See “The Argle-Bargle Over This Jiggery-Pokery Is Pure Applesauce” (June 25, 2015); see also “The Continuing Argle-Bargle” (June 29, 2015) (noting Scalia’s use in Obergefell of “huh?,” “what say?,” and “I would hide my head in a bag”). None of those terms had ever been used before in a Supreme Court opinion, either, just one of the many ways in which Scalia broke new ground. 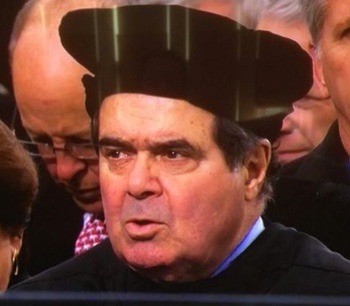 Also, he wore this hat (right) in public. And you don’t do that unless you have a decent sense of humor.

Of course, not everyone found him amusing all the time (and some people found him amusing none of the time). For example, I personally was not a fan of his opinion that torture—or as he once called it, “so-called torture”—should be constitutional in some circumstances, specifically the “ticking-time-bomb” scenario that happens a lot on TV but is super-unlikely otherwise. “Is it really so easy to determine,” he said in a BBC interview, “that smacking someone in the face to determine where he has hidden the bomb that is about to blow up Los Angeles is prohibited in the Constitution?” Wow, I think it is. If it turns out the torturer really was acting in defense of third parties, then that’d be a valid defense just like it could be in a murder case. But it’s an affirmative defense the torturer has to prove, not a reason to look the other way in the first place.

A number of his judicial opinions were also not that comical, in my view, such as his insistence that someone on death row would never have a constitutional right to “demand judicial consideration of newly discovered evidence of innocence….” That was before my time (or this blog’s time, anyway), but I did take issue with his opinion that for an officer to shoot at a car (six times, killing the driver) was not necessarily “the application of deadly force.” Seemed like pure applesauce to me. Not that I always disagreed with him, or at least I went out of my way to write about his dissent from an awful Fourth Amendment opinion on DNA evidence. As so many have noted, virtually all his opinions were well-written, even if you disagreed with the content, so he gets some credit for that too.

Finally, I think it says a lot that despite their ideological differences, which were vast, he and Justice Ginsburg did in fact once ride on an elephant together. 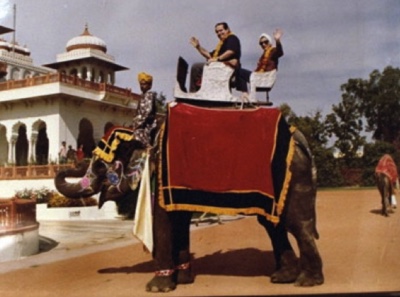 I’m sure she could have gotten her own elephant if she wanted, and she didn’t have to ride with him at all. But in fact, as different as they were, these two were “best buddies,” as Ginsburg emphasized in her statement following his death. We disagreed “now and then,” she wrote, but his dissents improved her opinions, he was “eminently quotable,” a “jurist of captivating brilliance and wit,” and most importantly, he was a “treasured friend.” A pleasant reminder that (Twitter invective notwithstanding) it is possible to completely disagree with someone on almost every issue and yet still fit on the back of the same elephant.

McCain Sued by Jackson Browne Over Use of “Running on Empty”

Evidence You Have Too Much Money