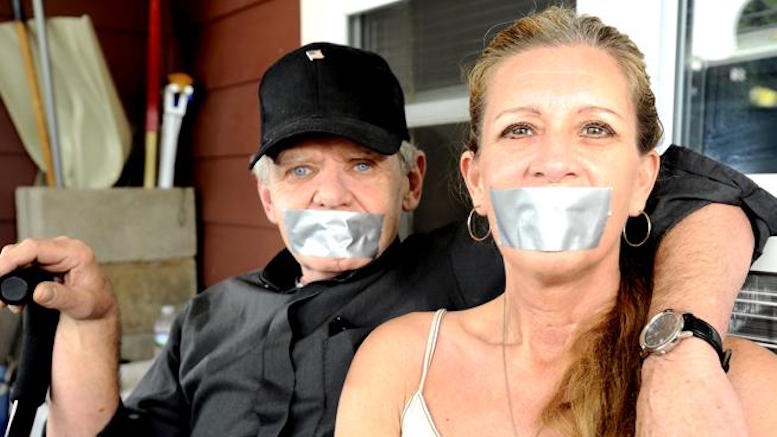 Of course they feel they're being unjustly persecuted (image: Daily Camera) 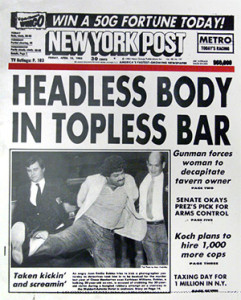 It’s really too bad that this didn’t involve a victimless crime. Well, sure, bad for the victim, because there was one, but my point is that it deprived the world of what might have been a pretty decent headline. No headline will ever surpass “Headless Body in Topless Bar,” of course, the legendary phrase that everyone at the New York Post immediately recognized was one for the ages: “The whole staff gathered behind Vinnie [Musetto, the author], like one of those oil paintings you see of the signing of the Declaration of Independence, with the Founding Fathers huddled together to absorb the impact of the moment,” a witness later recalled. Sadly, destiny grants few such opportunities. (Personally I thought “Pantless Objection to Topless Protest” was pretty good, but of course it was only an homage.)

Anyway, the above is the best I could do after about half a billable hour of thought.

Catharine Pierce and her husband Robert have actually appeared here before, partly because of her topless-gardening habit but also because he turned out to be quite a character as well. See “Good Reason to Kill #51: Told My Wife to Keep Her Shirt On,” Lowering the Bar (Oct. 9, 2014). They are a charming pair of individuals who have troubled Boulder County for some time now with their general belligerence and frequently public semi-nudity. Robert Pierce was investigated by the Secret Service in 2013 for allegedly threatening to kill the president. A waitress said she overheard him saying he was going to “kill Obama and bring him down,” which he semi-denied. “I said I would go to D.C. to debate the president on any topic and kill him in the process and bring him down,” he claimed later, so I guess you could say it was a rhetorical threat.

He has also claimed to be the son of President Eisenhower, which he isn’t.

At the time of their previous appearance here, only Robert had been charged with a crime (assault), and that charge is reportedly still pending. It isn’t illegal (for either gender) in Boulder to be topless in public, so Catharine was guilty only of creeping out the neighbors. Until she swindled a half-blind 73-year-old man out of his home, a jury found last week.

According to the Daily Camera, the two Pierces moved into the man’s trailer in 2014, staying with him rent-free for about seven months. He apparently told them they could have the trailer after he died if they agreed to take care of his cat, which he said was the only thing in the world he cared about. Police said Catharine got him to sign a document she told him was an agreement along those lines, but was actually a contract to sell her the trailer for $1. Using that document, she then successfully sued to evict him (this most likely succeeded because he couldn’t appear at the hearing due to cataract surgery).

This is where the “bottom of the barrel” part of the headline comes from.

Someone finally brought this to the local DA’s attention, and she blocked the eviction and charged Catharine Pierce with felony theft and criminal exploitation of an at-risk elder. The jury found her guilty of both crimes, and she now faces up to 12 years in prison. Her husband wasn’t charged with the swindle (seems unlikely he was oblivious to what was happening, but presumably he didn’t sign the “agreement”), but those assault charges are still pending against him.

He has claimed that the authorities are harassing him because he won’t drop his claim to be Eisenhower’s son, though, so maybe all this is part of a wide-ranging government conspiracy against the Pierces. Or maybe they are just a couple of low-lifes. I express no opinion on the matter, of course.

UPDATE (May 6, 2016): Catharine Pearce decided not to appear for sentencing, something that unlike wearing a shirt isn’t optional, so there’s a warrant out for her arrest.

NOTE: Trying to Blow Up an ATM Could Backfire