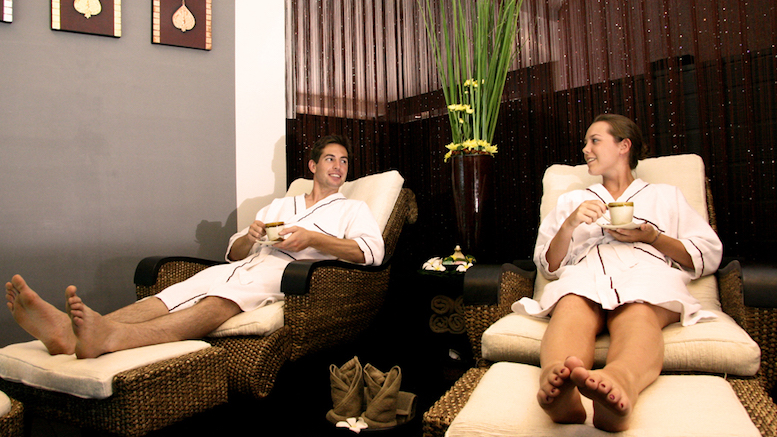 "Yes, it's wonderful here. Say, does that door lead to the parking lot?" (image: Tara Angkor Spa via flickr)

I was looking at some older posts and was reminded of the Spa Bandit (not to be confused with the Spanx Bandit), who plagued salons and spas in Wisconsin and Illinois during 2006 and early 2007. The Spa Bandit was a man who appeared to be about 50 years of age; he would order all kinds of expensive services (massages, waxing, pedicures, you name it) using aliases, and then flee without paying for them. His reign of spa terror was finally brought to an end in February 2007, when police arrested 56-year-old Marshall G. Wolbers at a train station in Lake Bluff, Illinois.

Or at least I thought that was the end of it.

The links in those posts were broken, and while updating them I learned Wolbers’s criminal career neither began nor ended with the aforementioned spa banditry.

According to the Illinois Secretary of State, the man who later became the Spa Bandit once pretended to be a securities broker, or at least I infer that from the state’s decision to permanently ban him from being one in 1999. In 2006, the state charged him with violating the ban and defrauding investors. This proceeding, of course, was going on at the same time Wolbers was getting himself fraudulently waxed in at least two states.

It’s not clear what happened in the securities case, but Wolbers was prosecuted in late 2007 for the spa crimes. In two separate cases, he pleaded guilty to theft of services and was fined and ordered to do public service. He also got jail time, but those sentences were suspended. “I’m hoping that in conversations with your doctor you can get to the bottom of this,” the judge said to Wolbers, “this” presumably meaning his compulsive pedicure-stealing behavior and whatnot. Oh, yes, your honor, Wolbers replied, “I want to get my life back on track and I’ll do whatever it takes to do that, and do it with seriousness and purpose.”

In December 2011 he struck again, this time in Madison, Wisconsin, using another alias and demanding a full body wax, massage, manicure, and pedicure, after which he fled without paying. Given the modus operandi, it didn’t take too long to identify Marshall G. Wolbers as the culprit this time. Finding him was another story, apparently. I couldn’t find any reference to another Spa Bandit prosecution. I suppose this sort of crime doesn’t exactly make someone Public Enemy No. 1, so massive resources probably weren’t deployed to find him.

But within a few months, he had upped the ante significantly. In July 2012, he abducted a woman at gunpoint, took her credit and debit cards and stole her van. He was on the lam for two months before being apprehended after a high-speed chase. He was then charged with the armed robbery, driving a stolen vehicle, and multiple traffic offenses, and although the report didn’t mention this, hopefully also for the Madison wax caper.

Wolbers stood trial in 2014 for the armed robbery, and it turns out somebody else did that crime. Or that’s what Wolbers said, anyway, explaining that he had just been minding his own business in Appleton one day when a stranger pulled up in a van, claimed to be ill and asked Wolbers to drive him to Madison. Of course he agreed, because that’s the kind of guy Marshall G. Wolbers is. But then, he said, the mystery man pulled a gun and forced him to use what appeared to be stolen cards at a number of locations. Once they got to Madison, though, the man got out and walked away, never to be seen again. But Wolbers had trouble explaining why he still had the stolen van two months later, and why he had never reported these crimes.

His lawyer also argued he was incompetent to stand trial, which is better than the other story but it turned out Wolbers was lying about that too (according to a prosecution expert). It took the jury just 40 minutes to convict him.

Wolbers was still maintaining his innocence at the sentencing hearing, when he again told the story of the mystery man. He also argued that the crime didn’t fit his personality, which he described as “kind, gentle, generous and tender-hearted.” Did the judge buy it? “There isn’t a jury on the planet that would’ve found you not guilty,” he said, so apparently not.

The end of that saga, for now, is that Marshall G. Wolbers, fraudster, spa bandit and armed robber, was sentenced to ten years in prison (with another ten years of “extended supervision”). I can’t be sure I’ll still be around in 2024, so I would encourage Midwestern spa owners to mark his release date on their calendars and be alert for a 70-year-old man asking to be exfoliated. He is not what he seems.

The Have-Lunch-Nearby Getaway Plan Is Still Not Working

Ostriches May Have Last Laugh on Halloween Assailants