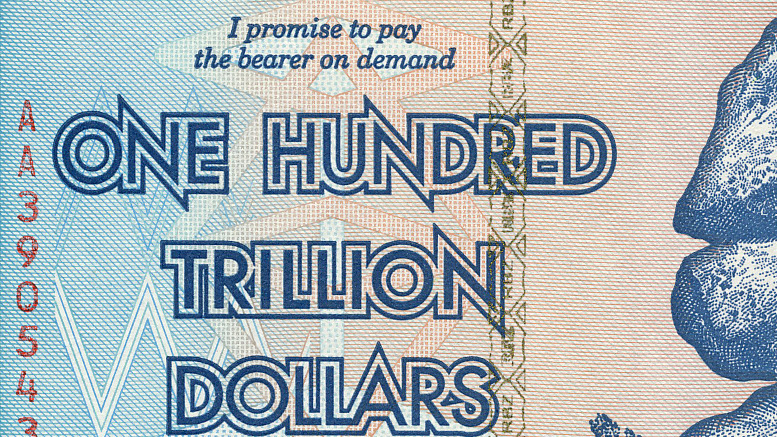 Don't spend it all in one hundred trillion places

Improbable Research reminds us that Saturday is the deadline for turning in any Zimbabwean currency you may still have in your wallets, before said currency becomes completely worthless (except to collectors, maybe). The Zimbabwean dollar is basically worthless already, but the currency may not be, yet, at least assuming the bill has a sufficiently high denomination. Like, at least a trillion.

I could have sworn I’d mentioned Zimbabwe’s currency problems before, but the only mentions of Zimbabwe I can find are this one from 2013, when the ruling party was having some trouble finding the list of registered voters (for the whole country), and then of course this one about the ridiculous rumor that President Robert Mugabe fell down. So this’ll be my third flattering portrayal of the people running that country.

Zimbabwe first introduced its dollar in 1980, and at that time it was worth US$1.47, at least officially. The country’s economy left something to be desired, however, and the value of the Z-dollar declined accordingly over the next couple of decades to about one percent of its former value. Enter Gideon Gono, who was appointed to run the Reserve Bank of Zimbabwe in 2003. His approach included tried-and-true macroeconomic strategies like printing lots more money and (according to Wikipedia) personally visiting shops in Harare to demand the owners lower prices. Sure, that worked for Alan Greenspan, but only because he would instantly beat the crap out of anyone who refused. Gono doesn’t seem to have done that, but he did have people arrested.

As even I could tell you, and I’m a guy who thinks the term “voodoo economics” is largely redundant, if you print money like crazy you do not in fact end up with more money. Turns out each bit of money somehow becomes worth less than it was before. This is one aspect of what is called “inflation,” and if you hyper-print it turns out you get hyper-inflation. How hyper was Zimbabwe’s inflation? Well, hyper enough to have its own Wikipedia article (“Hyperinflation in Zimbabwe“), which says that the inflation rate was 16% in 1996, 48% in 1998, 599% in 2003 (when Gono took over), and by 2008 had reached 231,150,889%. For comparison, the inflation rate in the U.S. has averaged about three percent per year. In 2008 the rate in Zimbabwe was two hundred and thirty-one million, one hundred fifty thousand eight hundred and eighty-nine percent. Just to give you an even more ridiculous number, the rate in November of that year has been estimated at well over 79 billion percent. One U.S. dollar would have gotten you 2 x 1033 Z-dollars, assuming you could find a place to put them.

So that people could do that, they had to print bills in larger and larger denominations, although they did try to “redenominate” the currency several times. In July 2008, for example, Gono announced a new Zimbabwean dollar, which would be just like the old one except with ten zeroes knocked off (10 billion became one dollar). In 2009 they dropped 12 more zeros, so that now one dollar was worth 10 trillion trillion of the original dollars. Put another way, the $100-trillion bill was worth about US$30 (at least on Jan. 16, 2009).

So finally they gave up.

They stopped printing the Z-dollar in 2009, and have been using other countries’ currency since then, which seems to have solved the hyperinflation problem. Last year the post-Gono Reserve Bank announced that it would be “demonetizing” the old bills, exchanging them for other sorts of paper that people like better. In its most recent official statement, it said that April 30 will be the last day of these exchanges. So if you want to get any U.S. dollars at all for those things, either trade them in by then or plan to sell them on eBay.

“Walk-in cash customers” will receive one U.S. dollar for every 250 trillion Z-dollars, while bank account holders will be paid a flat US$5 for a balance of up to Z$175 quadrillion. Higher balances will be exchanged at a rate of 35 quadrillion to one.

A quick search shows that the 100-trillion-dollar notes are currently being offered for about US$45 apiece on eBay, in fact. Not sure what they’re actually selling for, but that might be a better option—if you get in on the ground floor.