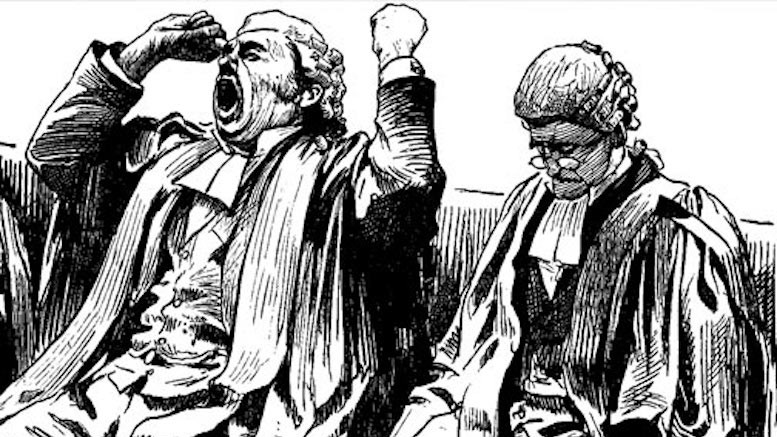 The sad truth is that this just doesn’t work, and it really irritates judges. We’ve already considered at least one example, and now here’s another: “At one point during examination of the defendant, government counsel pretended to be asleep in his chair, his unconscious visage being broken only by an occasional loud sigh.”

In this case his unconscious visage also cost Oregon a lot of money.

Wilkens v. Edwards was an excessive-force case against a state trooper (and the state government) based on a traffic stop. While you might say the facts were not egregious, that’s in comparison to other recent cases in which the facts were, to use a legal term of art, frigging unbelievable.

The dashcam clip below starts with Wilkens speeding past Edwards’ (unmarked) police car. Edwards pursues, although it’s not clear it was a “pursuit” of someone trying to get away; Wilkens claimed he didn’t know Edwards was there, he doesn’t make any turns or try to leave the road, and he stops at the first intersection. That’s where Edwards catches up (at about the 3:30 mark). And that’s where Edwards then hits Wilkens’s motorcycle with his car, not at speed but hard enough to knock him over. Edwards then gets out, points a gun at Wilkens and kicks him in the chest.

Again, this is not even within sight of close to the worst thing a police officer has done to a citizen recently, but also again, that’s compared to cases involving torture and murder. The legal question is whether the force used was excessive under the circumstances, and the jury found it was. While it doesn’t look to me like the kick really even connects, there apparently was no dispute that Wilkens suffered two broken bones. Plus there was the whole question of why the officer was kicking him at all. The jury awarded Wilkens $31,000 for medical and bike-repair expenses, another $100k for pain and suffering, and other $50k in punitive damages. “I’m just happy as heck,” Wilkens was quoted as saying afterward, and I bet he was.

The verdict might have been influenced by the officer’s claim he “bumped” the bike accidentally because his car was experiencing “brake fade,” a story it seems doubtful anyone believed.

But here we are mostly concerned with ridiculous litigation tactics, and those were outlined in the judge’s order awarding $318,000 in attorneys’ fees (you can get fees if you prevail in a civil-rights case). The amount is determined partly by the number of hours (of course), but a judge also considers whether the hourly rate is reasonable. In this order, after considering the expertise and skill of the lawyers involved, the court then found their rates were also “reasonable in light of the litigation tactics employed” by the state’s attorneys. That is, he held these were “exceptional circumstances” of a kind that may justify increasing an hourly rate.

“The government’s approach to litigating this factually simple dispute was unprecedented,” the judge wrote, and if you think he meant unprecedentedly appropriate, you are incorrect. No, unprecedented “in both its scope and its lack of regard for the law and the facts of the case.” (So, pretty much all of it then.)

For example, the state “filed 22 objections to exhibits being introduced by the plaintiff.” Having recently been involved in a case where we filed hundreds of objections, I was hoping that sentence would continue, and it did: “all of which were groundless.” (Ours weren’t.) The state objected to pictures of the accident scene, even though it was offering the same pictures itself. It also objected that the treating doctor’s testimony and the plaintiff’s medical records were irrelevant, about which the judge stated: “No attorney before me, in the 29 years I have been on the bench, has objected on these grounds to the testimony of treating physicians in a case involving injury.” (Tip: when a judge says this is the first time he or she has heard something “in X years on the bench,” what follows is probably not going to be a compliment.) The court concluded that it could only explain the conduct as the use of unfair tactics in an attempt to discourage plaintiffs and their lawyers from suing over police misconduct.

The feigning of sleep was important to this conclusion, however.

“But for the behavior of counsel at trial,” the judge continued, “I would chalk such tactics up to inexperience.” The condescending attitude exhibited by the state’s lawyers supported the view that its “trial tactics made the litigation more costly and prolonged” and was “intended to deter the plaintiff bar from filing lawsuits.”

While the best of us at times have our moments of eye-rolling, snickering, and sighing in the courtroom, it quickly became apparent that this was a concerted tactic to discredit the plaintiff in front of the jury. At one point during examination of the defendant, government counsel pretended to be asleep in his chair, his unconscious visage being broken only by an occasional loud sigh. Such tactics failed miserably to impress the jury and required repeated warnings from the court.

Discrediting the other party is fine, of course, if you go about it the right way. But this isn’t it.

On the other hand, maybe it’s the “loud sigh” that was the problem. Consider just pretending to nod off, with maybe the occasional light snore if you think the jury hasn’t noticed you yet. Might get away with that. But you didn’t hear it from me.

Who Dat? Inc. Sues for Misappropriation, Everything Else It Can Think Of