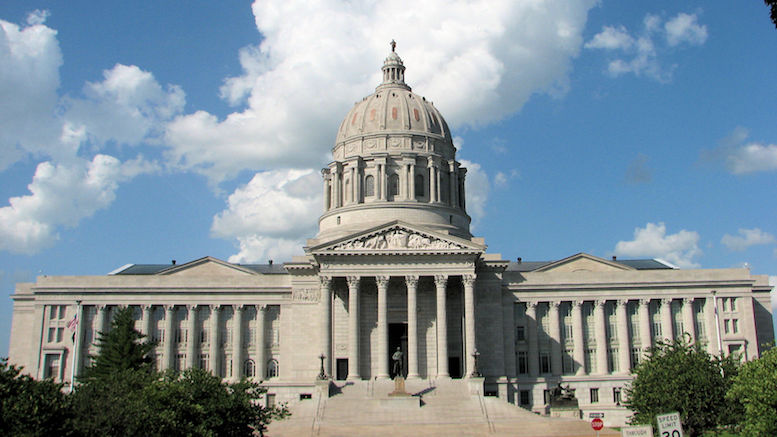 The Missouri Capitol, where they take physical matters seriously (image: RebelAt via Wikipedia)

I grew up in Missouri, a state in which a significant part of the population pronounces it “Missourah” for reasons unknown to me. But they can pronounce it however they want. It’s their state too.

They cannot, however, use the word “physical” when what they mean is “fiscal.” That is a different thing, and it is a thing that Rep. Tracy McCreery has had just about enough of. Hence, House Resolution 1220:

McCreery told the Riverfront Times that she didn’t introduce the resolution as a joke, really, “I did it because I hit a wall” and hearing this had become like “nails on a chalkboard.” It isn’t just every now and then, she said. “It happens pretty much daily. It really does.”

Nor is it a question of accent. While an accent might cause someone to drop the middle syllable of “physical,” making it sound like “fiscal,” seems very unlikely it would happen the other way around. Adding or changing a syllable is much more likely to be just a mistake, as in—and this is the worst such example I can think of, one I hesitate to even write—”nu-cu-lar.”

As in “nucular weapons.” Arrrghh!

Talk about nails on a chalkboard.

In the same way, hearing people talk about “physical matters” or the “physical year” coming to a close has apparently been driving McCreery and other similarly situated representatives completely bonkers. So she decided to take action. Non-binding action, but still. You can’t just turn a blind eye to this kind of thing.

“I made it almost an entire quarter” before doing something, she told the Washington Post, “which I think shows great restraint.”

McCreery also told the Post that she would not be taking an official position on how to pronounce “Missouri,” and for good reason. “That would be like the third rail in this state,” she said, which I think is absolutely correct. “So, I will leave that for people to decide on their own.”

How to Avoid Jury Duty, #6: Bring a Sword to the Courthouse