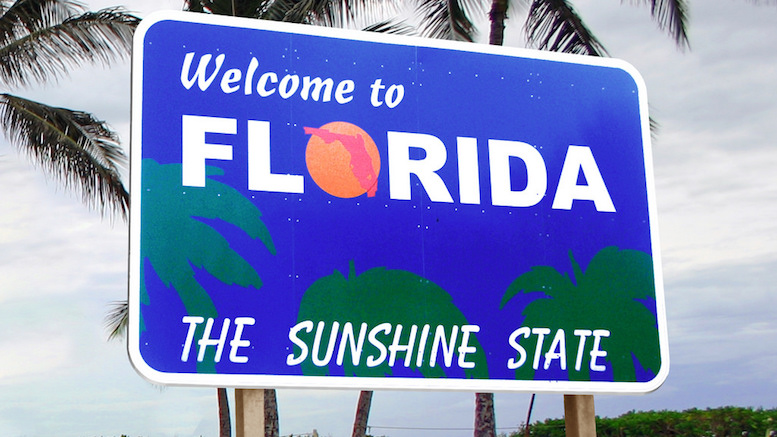 Is it still the Sunshine State at night? (Image: joelk75 via flickr)

Not only is it illegal to make your spouse do this, it’s even illegal to let your spouse do it if he or she wants to, because we have to have a law against everything, apparently. It’s also illegal to do it. Basically, the roof is totally off limits.

Unless you’re in a parade.

This question arises from the recent arrest of a Florida man (credit: The Smoking Gun) after he was stopped by a police officer who wished to inquire as to why there was a woman clinging to the roof of his car. The answer to that question, as you might expect, turned out to be complicated.

The answers to the questions “who is she” and “how long has she been up there,” on the other hand, were pretty straightforward:

Lack-of-spoiler alert: you will not learn how or why she got up there in the first place, because nobody seems to know. Chief among those who do not know: her husband, though he was operating the car from a position just below where his wife was sitting, Native American style, on the roof. (The officer in this report says “Indian-style,” but I’m told that’s no longer appropriate.)

The man said he had decided, at about midnight on March 22, to leave the resort at which the two had been staying. According to the police report, he said that at the time he left, “he did not realize that his wife [was] on the roof of the vehicle.” Only when he reached the first traffic light after crossing the Sewall’s Point Bridge, in fact, did he come to realize this, when he finally “heard her banging on the roof and realized that she was there.” Based on my research, this was a distance of one to two miles (depending where they started, which is unclear). 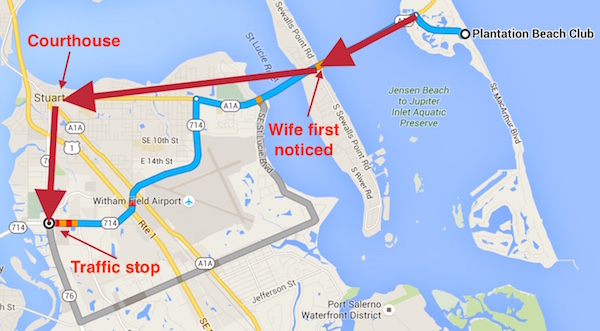 While she claimed to have been “banging on the roof and screaming for help the entire time,” I would think a person sitting Native American style on the roof of a car being driven across a bridge would want to hang on with both hands, leaving none available for banging; and given the number of bugs I assume swarm near Florida bridges, I’d think that person would want to keep her mouth closed. So it is not utterly implausible that it was only at the first stoplight that he noticed a commotion. (It’s just very implausible.)

Once he realized she was up there, of course … well, he kept driving. According to him, “he continued to drive with her on the roof because he … did not have a cell phone to call the police.” That is, he claimed to be concerned for his own safety, and did not want to stop without a “police presence,” as he put it. Lacking a cell phone, he drove to the local courthouse, about three miles further on. Finding no police presence there, he turned south. His destination was now the couple’s other car, which for reasons not explained was parked in the lot of a local pawnshop. He was planning to drop her off there, he said, but this plan was interrupted by an unexpected police presence about 1.5 miles down the road. This was a total roof odyssey, therefore, of about six miles.

The husband was charged with reckless driving and “permitting” a passenger to ride on top of a car. It is in fact unlawful in Florida “for any operator of a passenger vehicle to permit any person to ride on the bumper, radiator, fender, hood, top, trunk, or running board of such vehicle when operated upon any street or highway,” or for any person to ride upon any part of a vehicle not designed or intended for passengers. There are exceptions, but spousal transportation is not among them.

On the other hand, the law doesn’t apply to any “person participating in an exhibition or parade, or any such person preparing to participate in such exhibitions or parades.” So he could argue that he was “exhibiting” his wife clinging to the top of his car, or at least I would encourage him to argue that, and also that he was just practicing in case they are ever suddenly called on to participate in a parade. There is no charge for this advice, ladies and gentlemen.

Oddly, the driver was not charged with DUI, although the officer detected a “strong odor of alcohol” on his breath. (Oh, did I forget to mention alcohol was involved? For both spouses? I thought you’d just assume that. Sorry.) Another unanswered question is why she was not charged with non-parade-based roof-riding, although that is forbidden by the same law that he violated. Probably evidence of discrimination, or at least I’d encourage him to argue that, too.

While the woman obviously could have been hurt, she was not, so I feel free to find this hilarious, which I do. It doesn’t quite equal this 2013 case in which a man who unwisely tried to stand in front of the other party’s car after a fender-bender ended up riding down the road on the hood of said car for a couple of miles, but that is mainly because of the video. In this case, no such luck.

“The White One Wants My Flesh”