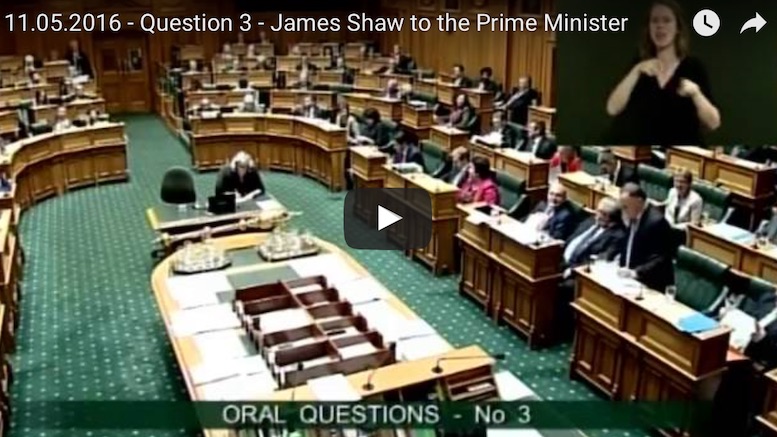 Yesterday (or “yisterday,” as they say there), New Zealand’s Prime Minister John Key got ejected from Parliament for not following the rules during Question Time (or “Quistion Taime,” as they say there). Specifically, he did not shut up fast enough when the Speaker stood up and called for order. Saying he had warned the PM about this previously, Speaker David Carter enforced the rules by ordering Key to get out.

I noticed this in the Twitter feed of Prof. Jonathan Turley. Here’s what he had to say about its significance:

As many of you know, one of my chief focuses as an academic is the separation of powers and that I hold a robust view of legislative authority under Article I. Indeed, I view the erosion of legislative authority in the United States to be one of the most dangerous trends in our country. That is why I noticed a story out of New Zealand where the Prime Minister John Key was actually tossed out of Parliament for not adhering to the rules of the body. It was an incredible moment at a time where executive powers are being consolidated around the world. For those who still believe in equal legislative power in a tripartite system, it was a rare contemporary assertion of independent authority.

I could not agree more. Although, to be totally honest, what put the story over the top for me was learning that the Speaker of New Zealand’s parliament wears a cape: 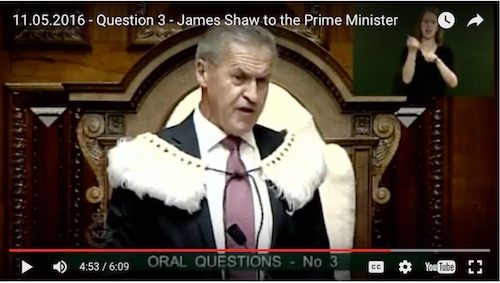 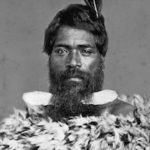 Granted, “cape” may not be exactly the right word. It appears to be some version of a traditional Maori feathered cloak (right). It does not appear to be traditional for the NZ Speaker of Parliament to wear one of these, or at least it hasn’t been common recently, which I infer from this report that the opposition tried to make fun of him for wearing it on his first day. Asked about his new “regalia,” Carter responded that it was a “Maori gift” and was meant to symbolize “goodwill, honour and peace to the House,” though he probably meant something more like “I’m the Speaker and I wear whatever I want, now be quiet.”

That report also describes the item as a “feathery capelet,” which suggests it’s not long enough to qualify as a “cape” or “cloak.” I didn’t find any full-length pictures of the Speaker (not that I looked very diligently), but pictures of him wearing it while seated (left) do suggest it is more of a capelet, if not just a shawl, rather than a full-blown cape. But I might be wrong, and for some reason I think calling it a “cape” is funnier. So cape it shall be.1

And you ignore a man wearing a cape at your own risk. There’s more than one reason for that, of course, but here it’s because the cape is a symbol of authority, in particular the authority to make people shut up during Question Time. That is an important function, because Question Time can be a raucous affair. I think Americans find it very entertaining (I know I do) because we are saddled with a Congress that now debates almost nothing—mostly reading stuff into the record in an empty chamber—and the only time the President addresses Congress directly is the semi-regal and incredibly dull State of the Union Address. I personally think presidents should have to go over there every so often and answer questions hurled at them by the opposition, complete with the jeering by both sides that punctuates Question Time, as you can see and hear in this clip of yisterday’s session:

That seems much healthier to me than a system where the president only shows up once a year, and then parades in and reads a speech like some monarch addressing subjects from a balcony. The only other time he shows up, or used to, is to ask for legal authority to go to war, which Congress always gives him anyway. Make the president answer questions (“You lie!” isn’t a question), and make congresspeople ask them, and let everybody hoot. We’d be better off.

There are still rules, of course, and the Speaker is the one who enforces them. On this occasion, the PM was being hassled by a Green Party member about comments regarding the Panama Papers. If you’ve never seen a Question Time, it’s worth watching—there is indeed hooting and jeering, and the occasional thinly veiled insult, but it’s all pretty civilized. And when the Speaker stands up and calls for order, you sit down and be quiet. That’s how it works. And if you don’t, or don’t do it quick enough, this might happen: 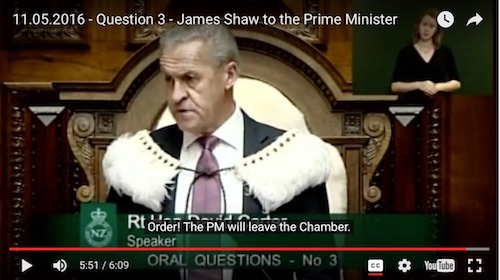 Executive Branch, shut up and get out

“I gave him fair warning,” Carter said, directing a glare around the room. “When I stand to my feet and call to order, he is to be treated no different than any other member of this House.” I assume it’s just a figure of speech to say Key was “thrown out,” and that he left under his own power.

Which, again, is an important symbol—and symbols are important in politics. The president isn’t royalty. He doesn’t even have a capelet! It’d be good for us if the legislature could just tell him to shut up and go home every once and a while.

1 Update: This report described it as “a kind of garland of albatross feathers,” which answered one question—it isn’t a cape—but raised another: is the Speaker aware of the symbolism of having an albatross around your neck?

I then answered my own question: probably he is, because the symbolism is very different in Maori culture, it turns out. To the Maori the bird “represented beauty and power,” and wearing albatross feathers or bones generally indicated a “person of rank,” so it would be entirely appropriate under the circumstances in New Zealand. Assuming you’re going to wear feathers at all, that is.

City Council Appeals Its Own Decision

We Have That Bathroom Problem Again

TIP: To Avoid Seat-Belt Ticket, Seat Belt Must Be Attached to Car

If Darth Vader Were a Senior Partner