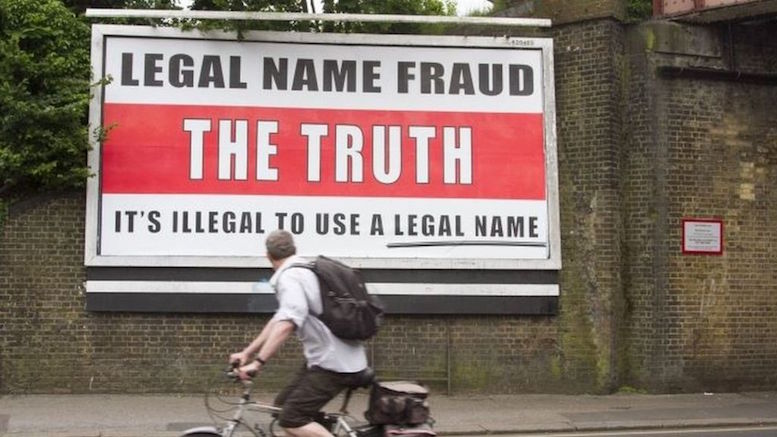 "Legal name" should be hyphenated, but that's far from the biggest problem here (Image: Rex Features)

I have no idea. What does that even mean?

As BBC reporter Jon Kelly wrote the other day, billboards like the one above have been popping up all over the UK. They are getting a lot of publicity, which is what billboards are supposed to do, but in this case nobody’s sure what the publicity is for, or exactly who is paying to get it or why. Or what it even means.

Googling “legal name fraud” turns up a bunch of apparently related websites that may or may not be run by the same person. The top hit is legalnamefraud.com, though it’s returned a “Bandwidth Limit Exceeded” message for a couple days now, but there are several others. The owner(s) of these sites are anonymous, but a number of them refer to the name “Kate of Gaia”—for example, kateofgaia.net, which has pictures of something like 120 of these billboards that are said to be in locations ranging from Plymouth to London to Yorkshire. So we may be able to glean something from those sites.

First, WTF is it about? Well, this essay at the Kate of Gaia site is entitled “Legal Name Fraud Explained,” but boy is it mislabeled. It uses English words that are put together to form sentences, and that’s about all I can glean from it. Here’s a better “explanation” I found in a Q&A section at a related site, losethename.com [defunct as of June 2017]:

The birth certificate name fraud is a fraud that has been happening for years. It all happened at birth when your Father and Mother signed a record, or a certificate showing the proof of birth. What the government and Crown did not tell you was that they created a legal fiction, with an all capital letters name; this is not you, but is just the piece of paper they signed. Because this contract/document was created fraudulently (you weren’t told the truth about it), everything associated with the birth certificate/legal name is NULL & VOID because it has now been revealed.

In other words, this is another form of the “sovereign citizen” or “Freemen on the Land” nonsense that, among other things, tends to assign magical significance to names. As “David-Russell::Myrland” argued a while back, for example, words only have legal meaning if written in the “correct” way, which is determined by bizarre rules that—surprise!—only the proponents know or can understand. Since the government doesn’t do it right, poof, it has no power over them. Or so they claim. (Myrland was in prison at the time, which tells you something about how well the argument works.)

This “legal name fraud” version, too, appears to claim there is some difference between the “you” that was born and the legal “you” that was created shortly thereafter by the government (using all capital letters, to add insult to injury), either as part of a conspiracy that also included your parents or by defrauding them, too. That is, it’s a fraud by the government involving misrepresentations about a “legal name.” (This would have been clearer if they’d written it “legal-name fraud” like they should have, of course, but mis-hyphenation is not the biggest problem these people have.) But now that Kate has brought this to light, she seems to be saying, that’s all a thing of the past.

And as Jon Kelly notes, Kate herself appears to have dispensed with the fraudulent legal name the government gave her, whatever it was to begin with, and decided to use multiple alternatives instead. In addition to “Kate of Gaia,” she seems to be calling herself “JANE DOE-755,” “Dohm Teewatt,” and “D-ohm T-Wat,” and appears to have also used “Kate Renee Thompson” and “Keith William Thompson—who, it was reported, preferred the name Katherine.” For that last one Kelly cites to this report, which actually refers to a “Wilfred Keith Thompson” who in 2012 was defending against burglary charges in Ontario, Canada. In that case she refused to cooperate with the court and, while she did say she preferred “Katherine,” insisted that “I don’t actually have a name.” So it seems very likely to be the same person.

Further evidence is provided by this video of a presentation the person gave at some point, apparently also in Ontario, in which she identifies herself as “Kate of Gaia” and also says her “birth name” was “Thompson” and that her initials were “WKT.” Also, while I certainly didn’t watch all 36 minutes of this, the first two or three was enough to convince me that this is the same person who wrote “Legal Name Fraud Explained,” partly because while the person uses English words and complete sentences—and, to be honest, seems like a capable speaker just in terms of presentation—what she’s saying makes absolutely no sense at all. A lot of it has something or other to do with “phonics,” a concept that leads her to keep breaking down words into component parts and drawing various conclusions based on that. This was almost as entertaining as it was irritating.

Just to be clear, is there anything to what she is saying?

“Absolutely not. Absolutely none at all,” says barrister, law blogger and lecturer Carl Gardner. “It’s a kind of brew of pseudo-legal ideas. It’s the equivalent of thinking Harry Potter is science.”

David Allen Green, the legal commentator and solicitor at Preiskel & Co LLP who blogs as Jack of Kent, says it is “complete tosh” and warns people against relying on it in court. He adds: “It is nothing about law, and it is not harmless. Taking this daftness seriously can be legally dangerous…. You may as well walk into court with a t-shirt saying ‘I am an idiot.'”

Significant questions remain, such as (1) if this person lives in Canada, why are all the billboards popping up in the UK? and (2) who the hell is paying for them? Because they can’t be cheap. The advertising agency would not reveal the identity of the buyer, so for now we have no answers to either question.

If she can afford to pay for them herself, I might be in the wrong business.

Is It Legal to Shoot Fish With a Gun?