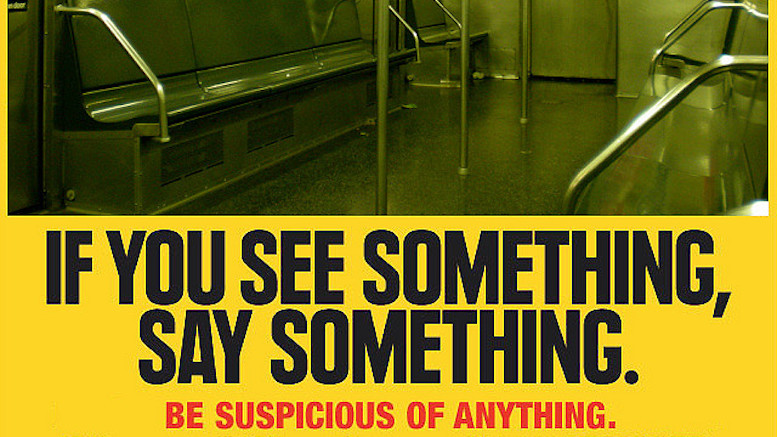 Something like evidence of war crimes, maybe (from a New York MTA poster)

I’m not saying Yusuf Abdi Ali is a war criminal. But I am saying he’s an alleged war criminal, accused of murder, torture, arbitrary detention, and other crimes while a commander in the Somali National Army during the 1980s. He allegedly fled to Canada after the regime fell, claiming to be a refugee, but Canada deported him. Then he came here, but left “voluntarily” while we were getting ready to deport him. He later came back, apparently with a fake visa, but was arrested by INS agents in 1998 for lying on application forms about whether he had ever “participated in genocidal acts.” He wasn’t deported then, though it’s not clear why.  He’s being sued right now by someone who claims Ali detained, tortured, and shot him in 1987. Again, these claims haven’t yet been proven, I’m just saying that one who looked into his background to any extent might see a few red flags.

I’m also saying that neither the FBI nor the TSA apparently did that, because CNN just found him working security at Dulles International Airport. 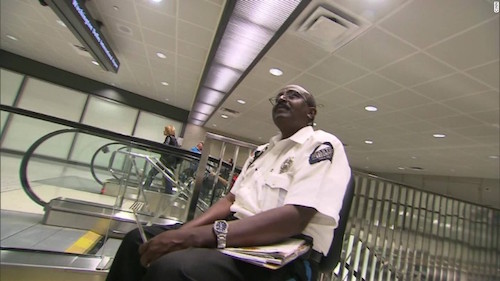 Just sitting here not torturing anyone. Why do you ask? (image: CNN)

According to CNN, Ali and his wife have lived, under their real names, in the DC area for almost 20 years now, currently residing in Alexandria. That’s more than an hour by train and bus from Dulles, but you go where the work is, I guess. And to get this job, though he works for a private company and not the TSA, he still had to clear a “full, federally mandated vetting process” that included an FBI background check and a TSA assessment.

Neither of which, obviously, found anything to worry about.

And that means one of two things: either they didn’t find anything, or they weren’t worried about what they found. Not sure which is worse, to be honest, but the first one seems kind of unlikely, or at least it would in a world that made any sense at all. Because to find out that Yusuf Abdi Ali has a somewhat questionable background, all you need to do is Google “Yusuf Abdi Ali”: 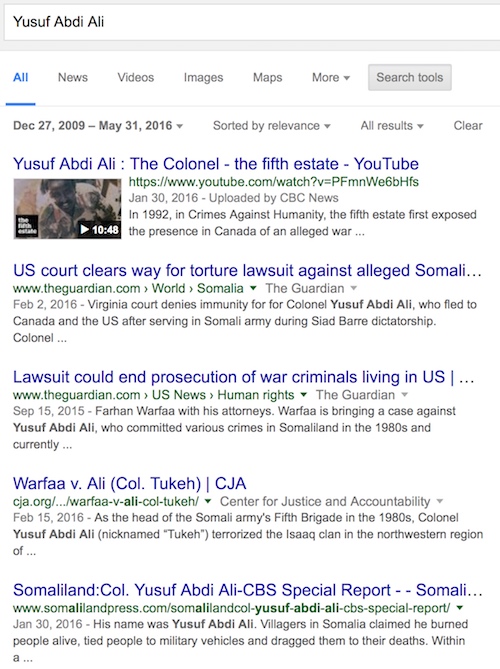 Those results are what you would have seen before the CNN report hit the news, had you been at all interested in someone named “Yusuf Abdi Ali,” let’s say because he was applying for a job that requires a background check because the person will have access to secure areas of an airport terminal, and if your background check includes something as robust as a Google search. While I might have doubts about a TSA administrator’s ability to do that—on average I’d expect about the same computer literacy as Derek Zoolander—surely an FBI agent could handle it.

But the alternative is that being an alleged war criminal—a charge not yet proven in court, admittedly, but not without supporting evidence—is not necessarily a deal-breaker when it comes to an airport-security job. I suppose his experience with arbitrary detention might be seen as a plus. But any evidence of a past willingness to murder and torture others seems like a good reason to select a different applicant, all else being equal. I’m not an employment lawyer, but I think that’s an OK reason to turn someone away. While Ali is not accused of the kind of terrorism we’re currently super worried about, one might suspect him of a certain, shall we say, moral flexibility that one would not favor in an employee granted free access to secured areas.

On the other hand, it has been a long time since the alleged crimes. Not that there’s a statute-of-limitations issue, but maybe the TSA is focusing on more recent threats. Which would explain why it not only let an actual convicted terrorist fly, it gave her PreCheck status. It had been a while. Or maybe only specific crimes matter, which would explain why a person who’d been indicted for insurance fraud, with a nationwide warrant out for her arrest, was found two years later working for the Department of Homeland Security.

‘Cause, again, the alternative is that they don’t really check people out all that closely.

Only, they tell us they do. And the point isn’t really that they make mistakes. Mistakes are inevitable. (Although this particular one maybe was not. See Google, supra.) The point is that truly vast amounts of money and other resources are being consumed, and individual rights have been limited, on the thinking that each new sacrifice is justified because it will make us a little safer. But it’ll never make us “safe,” because there’s no such thing, and I think stories like this highlight the lack of return we are getting at this point from the massive investment.

I guess I’d put it this way: if you flew through Dulles lately, the government treated you as a potential terrorist, while an alleged war criminal had the run of the airport. There’s something wrong with both sides of that equation.

Good Reason to Kill #41: Employee of the Month