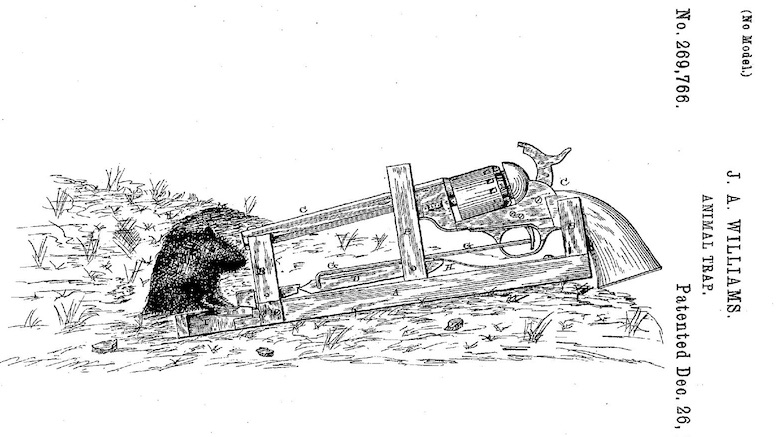 James A. Williams of Fredonia, Texas, applied for a patent on the invention shown above on August 21, 1882. He announced his invention as follows:

To all whom it may concern:

Be it known that I, Jas. Alexander Williams, of Fredonia, in the county of San Saba and State of Texas, have invented certain new and useful Improvements in Animal-Traps…. The object of my invention is to provide a means by which animals that burrow in the ground can be destroyed….

Said means entailed the mounting of one (1) Colt 1860 revolver C on wooden platform A, supported by frame B, with the revolver’s trigger linked by rod G and lever D to treadle I; when varmint V stepped upon treadle I, lever D would be released and its front end propelled upward by spring H, moving rod G rearward and triggering Colt 1860 revolver C, thereby destroying varmint V. 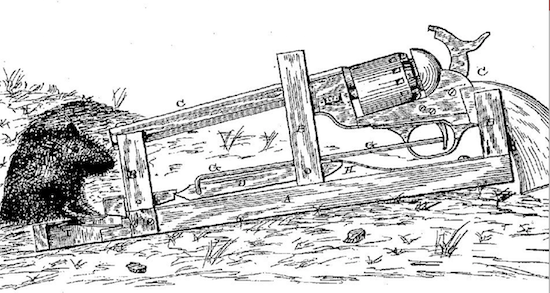 Williams conceded that this was not an entirely new idea, because similar devices had been deployed against human varmints; but he believed that his particular device was novel and therefore patentable:

I am aware that burglar-alarms of various kinds have been used, and which have been connected to windows and doors in such a manner that the opening of the window or door causes a pressure upon a lever which discharges a fire-arm; but in no case have the parts been arranged and combined as here shown and described.

Williams hastened to add that his new invention could also be used “in connection with a door or window, so as to kill any person or thing opening the door or window to which it is attached.” Thing? What non-human thing was roaming San Saba County in the 1880s that could open doors and windows? Can bears do that? Chupacabras? The undead?

Whatever was going on, the patent examiner apparently agreed that the invention was novel and potentially useful, because the patent was granted on December 26, 1882.

Interestingly, one of the two witnesses cited at the end of the application is “John Caldwell Calhoun,” but it can’t be the famous “John C. Calhoun” who served in the U.S. Senate—though his middle name was also “Caldwell”—because he died in 1850.