Well, I apologized in advance yesterday for the likely increase in posts due to me now officially being on sabbatical, but probably this post would have happened anyway. So let me apologize separately for this one, for reasons I’m sure are already clear.

The Ottawa Citizen reported yesterday that Justice Peter Doody heard closing arguments, but did not rule, in the trial of a former employee of the Royal Canadian Mint, on trial for allegedly smuggling gold nuggets out of the mint via the time-honored practice of inserting them into an internal smuggling compartment and then walking out with them. The roughly 210-gram (7.6-ounce) nuggets, known as “pucks” but obviously not puck-sized, are used to make gold bars or coins, and if these are basically the same thing as the “buttons” described here, are .9999 pure gold. [Note: not .9999%, as I originally wrote, which would not be very pure at all, but 99.99%. The Mint refers to it as “.9999 pure gold,” so I blame it.] 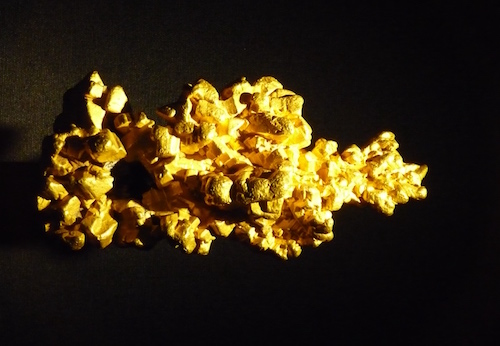 Gold nugget (not in smuggleable form)

After certain interim steps that need no discussion, the employee would take his smuggled nuggets to a gold-buying shop at a local mall, collect a check for about $6800 Canadian, and then walk over to a bank in the same mall to deposit them. So this money-laundering scheme, as one might call it, was about as sophisticated as the smuggling plan itself.

The man sold 18 pucks in a four-month period, and so was showing up about once a week, but no one at the shop seems to have asked any questions. A bank teller got suspicious, though, because (1) he deposited 18 checks from the same gold shop in four months, (2) he was wiring money out of the country, and (3) she noticed he worked at the Royal Canadian Mint. The Mounties were alerted.

They found four more pucks in a safety-deposit box, and he apparently also nabbed “dozens” of gold coins in the same way. The total value of the haul was estimated at almost $180,000.

According to the Citizen, at trial the defendant argued that the Mint could not prove conclusively that the nuggets had come out of it (again, I apologize for the whole post, really) rather than bought on the open market. The things are apparently unmarked, and—more surprisingly—no gold had been reported missing. Of course, he is a Mint employee found in possession of .9999 pure gold, and they did show that the pucks “precisely fit” the spoon used to scoop out molten gold during production. Records also showed he set off the metal detector more often than any other employee (except for those with a medical implant), but he somehow always passed the search that followed, which involves a “hand-held wand” but not in that way. This is all circumstantial, of course, but seems fairly persuasive.

Investigators also found a container of Vaseline in his locker, but again, totally circumstantial.

“Appalling!” said defense attorney Gary Barnes on Tuesday. He was talking about the Mint’s security measures, which “one would think should [be] the highest” imaginable, and yet “here the gold is left sitting around in open buckets!” The evidence apparently showed that the gold is left sitting around in open buckets, I take it, but it’s hard to see how it could be processed without there being at least some opportunity for a refinery employee to access it, handle it, and potentially put it in his rectum. I am not an expert in mint operations or the other thing, though, so I will defer on these questions. The Mint says it has upgraded its accounting and security tech since the incident came to light, but probably because they aren’t American police in New Mexico or Long Beach, for example, didn’t show any particular eagerness to look up a citizen’s butt anytime they get half a chance.

Justice Doody, to whom I apologize in particular, took the matter under advisement and is not expected to rule until November.

Between 2005 and 2006 an Australian smuggled $135,000 of that country’s dollars out of the mint where he worked, although that was all in $2 coins. Thankfully, because that reportedly worked out to four pounds of coins every day for ten months, he stuck them in his shoes instead.

Honey Badger Do Care About Eligibility