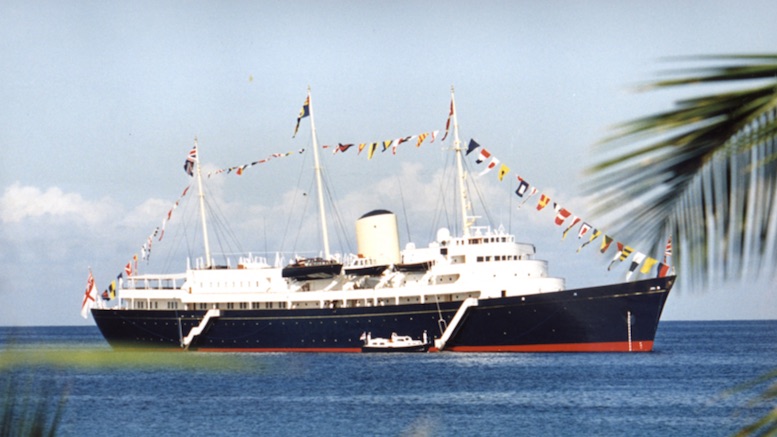 The Royal Yacht Britannia, some time ago

US politics of course is utterly ridiculous right now to the point of being surreal, and I’m sure people here in the UK would mock me mercilessly (and understandably) for that, if not for Brexit. I still don’t think anything can compare to that second presidential debate, but I did think this was somewhat ridiculous:

I, at least, did not expect that the phrase “a successful Brexit should mean…” would be followed by “the return of our Royal Yacht.” I just had never connected those two things in my own mind. And I’ve talked with a few people here about this Brexit thing now, and to date no one has said anything like “while this has embarrassed us, devalued our currency, and may cripple our economy, at least it will mean the return of our Royal Yacht.” But that is in fact what dozens of Tory MPs, including the guy in the clip, have suggested it should mean.

As you can see above, it’s a nice yacht. And in addition to giving the royal family something dignified on which to float, it was also once used to “show the flag” in various locations around the world, appearing at important political and commercial events. (It was decommissioned a while back by a Labour Party government and is now on display in Edinburgh.) But while the MP in the clip pointed out that trade agreements worth billions of pounds had been signed on the Britannia, he wasn’t all that specific as to why it was important to the relevant trading partners that the UK had a special yacht to sign them on. What seems to be important about the Britannia is the symbolism, not the substance—it being not coincidental, probably, that the guy started out by asking how they could all “make Britain great again.” (The answer: let’s go sailing.)

Not that symbols aren’t important, but this one would cost a lot of money. At least, that’s what Edinburgh MP Deidre Brock argued in opposition to the yacht proposal:

“I declare an interest of sorts,” Brock began, “in that Britannia is moored in my constituency.” (At first I thought she said “Britannia murdered my constituency,” but I’m still getting used to the accent.) “And I can tell you it’s not going anywhere partly because one of its propellers has been melted down.” It’s also currently in private hands, she noted, and at this point a different Tory MP asked to interrupt. Once she yielded, he asked, “Would you not agree with me that it would give due respect to the Royal Yacht Britannia if we described her not as an “it,” but a ‘she’?” (Laughter.)

He was joking, and it was all very polite. And I don’t want to read too much into the interruption—after all, the British debate very differently than we do. They are skilled at polite interruptions, from what I’ve seen. I also noticed that he didn’t walk up behind her and loom over her during the debate, or threaten to have her imprisoned, for example. But it did seem to highlight how ridiculous the whole debate was (relatively speaking). The British pound is at a 31-year low, banks are talking about pulling out of the country, and now is a good time to spend 100 million pounds on a yacht?

Shouldn’t they be spending that money on something that makes sense, like building a 50-foot wall completely around the British Isles to keep out all immigrants? Just my two cents.

“Carlos the Jackal” Still Worried About His Image