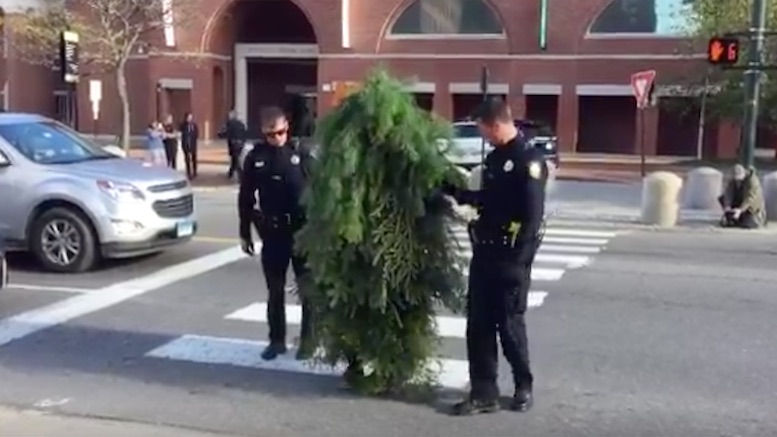 “It happens from time to time,” said Vern Malloch, an assistant police chief in Portland, Maine. Not the arresting of trees, that is, but rather the doing of “bizarre things” by people who “want to get arrested.” Often this is because the person is trying to make a dramatic statement in the course of a protest, but that wasn’t the motivation here.

It’s not clear what the motivation was, but it wasn’t that.

As the Portland Press-Herald reported, Tree was arrested on Monday afternoon for obstructing a public way, which it was doing by shuffling v e r y  s l o w l y across the crosswalks of a busy intersection. No signs or flyers were posted on Tree, nor did it engage in any obviously expressive conduct. It just shuffled.

To their credit, the officers who responded did not immediately riddle the offender with bullets, as is too often the case with American law enforcement. Maybe it was because this suspect made no sudden moves, or maybe because it was green, but either way, these Portland officers remained calm and just escorted Tree v e r y  s l o w l y out of the intersection. They then let him off with a warning, telling Tree it was “free to go” as long as it stayed out of the road. But Tree then wandered back into the intersection, which prompted the arrest. 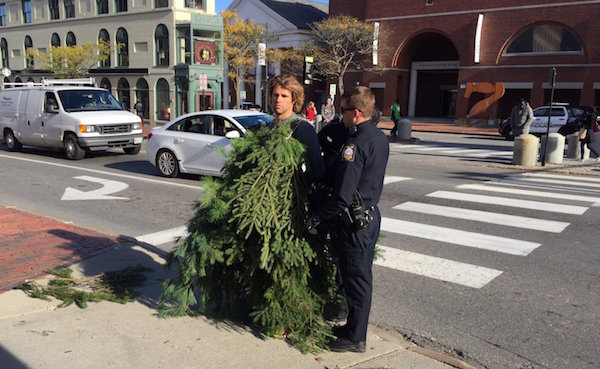 —revealing it to be Asher Woodworth (might or might not be his real name; I am suspicious), a 30-year-old Portland resident. Wordworth was originally tight-lipped about the motive for his actions, and “a friend” told CBS that he was “trying to study the city’s traffic patterns.” But according to Malloch, Woodworth told police he wanted to “see how people would react to what he called his ‘performance’ and how he might impact ‘people’s natural choreography.'” Well, he forced it to stop temporarily, so I think he’s answered that question.

Woodworth later told the BBC—which I congratulate on its excellent coverage of this important U.S. story—that he was a performance artist, although that may have been the BBC’s interpretation of his comments. It quotes him as saying that “I just had this very clear vision as I was meditating one day,” presumably a vision of himself shuffling v e r y  s l o w l y across an intersection while covered in branches, and that he wanted to surprise people and “make them rethink their expectations.” Again, I guess you could say he was successful in doing that. Why a tree? Why not a tree, I think is the question. “I feel a close kinship with trees,” he told the BBC, which is good enough for me.

I believe this is the first tree arrest I’ve reported on since 2007, when one of them robbed a bank in New Hampshire. See “Tree Robs Bank; Birnam Wood Suspected” (July 7, 2007) (with bonus Shakespeare criticism, though the bonus points may be negative). It got away with an undisclosed amount of cash, but was identified from security-camera footage as a local 49-year-old human, who was arrested the next day. At least, I can’t find any other tree or shrubbery arrests, although trees of course have featured prominently in other items over the years. See, e.g., “Hey, It Ain’t Deadly Force to Drop a Tree on a Guy” (Nov. 12, 2015) (noting Justice Scalia’s hypothetical to that effect in Mullenix v. Luna); (“Man in Tree to Police: ‘I’m an Owl‘” (Jan. 10, 2014); “Witness in Tree Corroborates Story” (Feb. 25, 2013); “Robber Armed With Tree Branch is Unsuccessful” (Aug. 23, 2011); see also “Criminal Armed With Plant Defeated by Customer Armed With Bar Stool” (June 29, 2008) (noting that the weapon was most likely yucca aloifolia, also called “Spanish bayonet” because of its pointed leaves).

Armed Robber Sues After Being Shot by Armed Victim