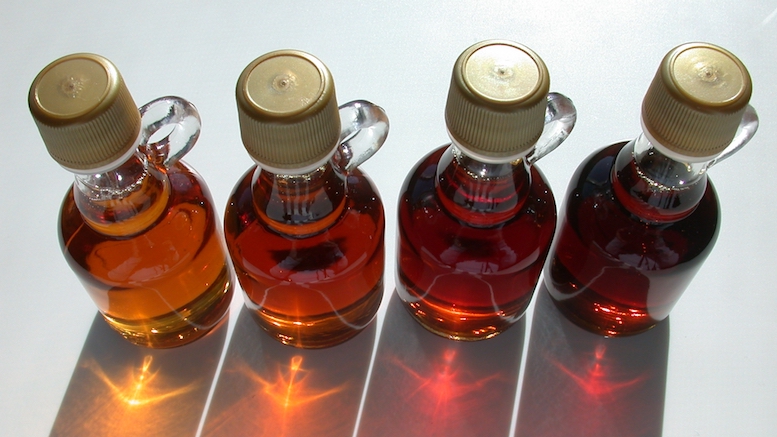 As America struggled to decide which of two likely criminals [okay, okay—each alleged by some to possibly have committed crimes, which is not to equate those alleged potential crimes in any way] to put in charge of itself for the next four years, Canada was quietly but efficiently dealing with its own national nightmare by dismantling the gang that looted the Global Strategic Maple Syrup Reserve. The CBC reported on November 12 that the reputed ringleader of the gang and two of his henchmen had been convicted in Quebec Superior Court.

This is a story that, for what are probably obvious reasons, Lowering the Bar has been following closely since the theft was first announced. See “Who Stole the Global Strategic Maple Syrup Reserve? And How?” (Sep. 14, 2012). As you may or may not recall, officials found during a routine inventory check that as much as 10 million pounds of the stuff had simply vanished from the syrup cartel’s storage facility in St-Louis-de-Blandford. To me a big part of the mystery was how exactly the pirates had managed this without being noticed, since they didn’t just steal the barrels but rather siphoned out the syrup and replaced it with water. It just seemed to me that stealing almost four million liters of maple syrup, especially by siphoning it, would probably take quite a while.

Nor would it be easy to move that much stolen syrup quickly, it seemed, and within two or three weeks police had indeed located an “important” amount of it in a facility in New Brunswick. See “BREAKING: MAPLE SYRUP FOUND” (Oct. 3, 2012). The following month, Quebec’s Sûreté made the first three arrests in connection with the maple-syrup heist (“Trois Arrestations en Lien Avec le Vol de Sirop d’érable,” Dec. 18, 2012)), and a few additional details emerged. For example, the plan was apparently carried out over a period of almost a year, not just one night, which makes a little more sense but still doesn’t explain how nobody noticed. It took another year to complete the investigation, but finally authorities announced that the last member of the gang was in custody. See “Canada’s Long National Nightmare is Over: Last Maple-Syrup Pirate Arrested” (Sept. 23, 2013).

I might have misjudged the nightmare’s overness, though, because it took another three years to bring the alleged ringleader to trial, and there are more trials to come, according to the CBC.  (A total of 26 people were reportedly arrested.) But last week, the alleged ringleader (Richard Vallières), his father, and a maple-syrup buyer were finally convicted for their roles in the scheme.

I have yet to see a full explanation of this whole affair (I assume some Canadian is writing a book?), or frankly even two reports in which all the details agree. I suspect the cartel isn’t eager to have exact figures released, and I guess that’s understandable though it does tend to frustrate my desire to come up with ridiculous metaphors for the amount of product involved (e.g. “enough to fill one-and-a half Olympic-sized swimming pools” with maple syrup). In any event, according to this latest report (and this one released during the trial), 3,000 tons of syrup went missing originally. It’s still not clear how, exactly, but we do learn that the defendant argued he was forced to participate at gunpoint:

Vallières testified he realized he was buying stolen syrup when a shipment arrived in special federation barrels that are an unmistakable whitish-blue colour. He broke down in tears, explaining that he tried to refuse the shipment, but the man who sold it to him threatened to kill him, his girlfriend and young daughter, telling him, “I know where you live.” Vallières said the man pulled a handgun from his coat.

The alleged seller cannot be identified, as a publication ban protects his identity until his jury trial begins next January.

This of course suggests that someone did steal the barrels originally, just another example of the maddeningly inconsistent media coverage of this important crime. Vallièrs testified that after being threatened, he then siphoned out the syrup and replaced it with water, so maybe they would bring barrels out, make the switch, and then put the originals back. I don’t know, I assume the book will clear this up.

Regardless of how it happened, prosecutors pointed out some issues with the defendant’s story. For example, although Vallièrs testified that he lived in fear of the mystery gunman for months, prosecutors noted that he sent friendly text messages to him including one that said, “Come see me, my love, I miss you,” and granted they were speaking French but this still doesn’t seem like the kind of thing one sends to a Mafia gunman who’s threatened your family. (He also admitted he had never paid personal or corporate income taxes, though my understanding now is that only dummies do that anyway.) Obviously, at the end of the day the court did not find this story credible.

Nor did it accept the ultimate buyer’s argument that there was no proof he actually bought any of the stolen syrup, even though he admitted doing business with Vallièrs. Prosecutors noted that a letter sent on his company’s behalf called the national syrup federation/cartel “A BUNCH OF A**HOLES, PART OF THE MAFIA,” and stated that the company would do its best to evade the rules and throw federation documents into the trash. They also presented invoices saying syrup was from New Brunswick when some of it was actually from Quebec, arguing it was evidence of concealment. Did this become New Brunswick syrup “by magic?” they asked. Yes, he reportedly testified. “It’s because you can’t prove what tree the syrup came from,” he argued, unsuccessfully.

Another five defendants will stand trial in January, the CBC reported. Maybe then, the healing process can finally begin.

A Brawl That Maybe You Should Not Find Funny, But Probably Will