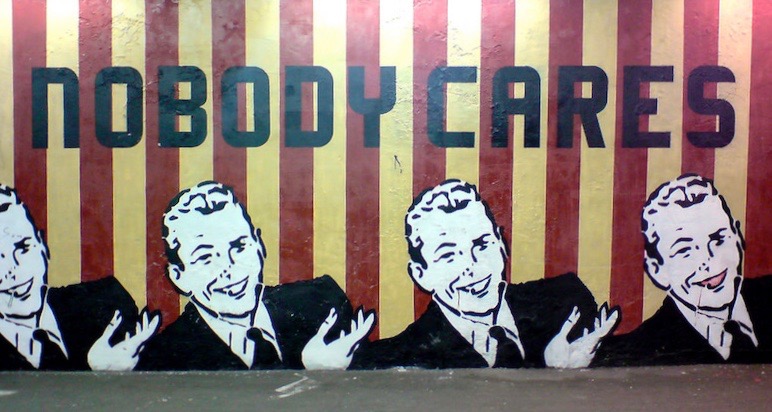 That’s Adam Nobody, a Canadian who was beaten by police in 2010 during the G20 protests in Toronto. One of the officers who beat him was convicted of assault, and Nobody complained to the Ontario Civilian Police Commission about the others. A hearing officer found those officers not guilty of misconduct, something Nobody wanted to appeal, but the officers claimed he filed too late. On Nov. 21, a judge held that Nobody has the right to appeal.

It won’t surprise you to learn that “Nobody” is not Nobody’s real name, or at least not the name Nobody was born with. According to the Globe and Mail in 2010, “Mr. Nobody … said he changed his name from Adam Trombetta about two years ago because it made for better puns. He suggested the headline for his story should be ‘Nobody hurt at Queen’s Park.'” The Globe and Mail didn’t take him up on that idea, but far be it from me to turn down the opportunity. So here we are.

Nobody said he only joined the protest to begin with because he was bored. And because he is kind of a smartass—not a criticism, coming from me—he made a “protest” sign that read “LET DONNA GRADUATE,” a reference to something that happened on 90210 back in the day. “I thought it would be funny,” he said, and it is, or it would have been, probably, had an officer not chosen that moment to charge at him. Others followed, and as a then-widely-circulated YouTube video shows, eight or so officers held Nobody down while at least one (probably more) delivered a beating.

Why they were so violently opposed to Donna’s graduation isn’t clear, at least not to me. But the real damage was apparently done a few minutes later, when another officer asked Nobody his name:

“Adam,” he replied. He was again face down, an officer’s boot resting on his head.

“Adam what?” the officer asked, according to Mr. Nobody’s recollection.

“It’s my name,” Mr. Nobody said he told the officer. The officer pulled the man’s ID from his back pocket. “Shit,” he said. “This guy really is a Nobody.”

Nobody’s nose got broken and he spent three days in the hospital having surgery to fix it. The complaints followed.

The November 21 opinion involved the fairly dull question of when an appeal is timely under the Police Services Act. I do find it mildly amusing, though, that the officers argued Nobody’s appeal was late even though he faxed the notice of appeal several hours before the deadline and the Commission got it just a few seconds later. How is that untimely? Well, the PSA says a fax will be “deemed to be received” the day after you send it. The point is just to make things easier by not requiring proof of receipt in most cases. Just prove you sent it, and we’ll assume they got it the next day unless there’s an issue. (Why not the same day? Who knows?) The court thus rejected the officers’ argument that although there was no dispute that the deadline hadn’t passed, everybody was legally required to pretend it had. Nice try, though.

This would be too boring to bother you with, of course, but for the guy’s last name and the court’s insistence on using it rather than, for example, just calling him “Appellant.” It’s generally better to use actual names anyway, and here it had the added bonus of generating sentences like “Nobody was arrested at the G20 protest,” “Nobody made a formal complaint” and “Nobody brings this application for judicial review to challenge the decision.”

It’s also probably not the first case I’ve mentioned that Nobody cared about and Nobody won.

Have You Ever Paid Royalties for Singing “Happy Birthday”?