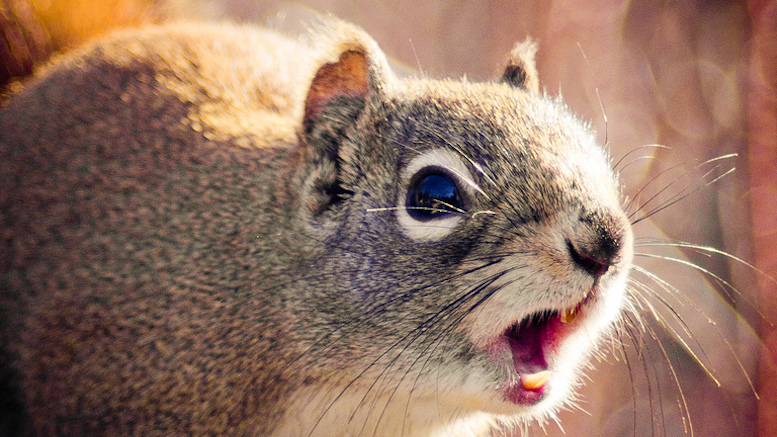 A Virginia paper reported last week that a contractor is suing a Chesapeake couple for damages he allegedly suffered in a ferocious squirrel attack. While details are a little sparse, Daniel Felice reportedly claims he was working in the neighborhood last summer when the squirrel pounced, leaving him bleeding “profusely.” The assailant then “darted into a house with young children inside,” so Felice “went in to chase the squirrel out.” It then ran to the nearby property of Deborah and Paul Desjardin, who Felice claims had been keeping it as a “pet.” He argues this means they’re responsible for its actions and is suing them for $90,000.

Felice claims the squirrel has been a member of the Desjardin family since spring, when their dog “brought the squirrel to their door.” That phrase makes it sound a little like the dog and squirrel had become good friends, like in a Disney film, but that’s probably not quite how it went. Anyway, Felice says Ms. Desjardin then “adopted” the squirrel, giving it “medical care” and food; it developed a habit of pecking at her lips as if “giving her a kiss,” and the Desjardins supposedly “encouraged” the animal to approach other humans as well. According to the lawsuit, the squirrel attacked a girl on July 11, and Ms. Desjardin apologized for that and told the girl’s parents she would “wring his neck” for the incident (presumably meaning the squirrel). Felice says he was attacked three days later.

Ms. Desjardin was actually charged with “unlawful possession of wildlife,” apparently meaning Virginia Code section 29.1-521, which makes it illegal to hunt, kill, trap, transport, or possess any wild bird or wild animal “except as specifically permitted by law.” These events did take place outside Virginia’s squirrel season, but on the other hand, this part of the code seems intended to regulate hunting, not the keeping of pets, so maybe that’s why the charge was dismissed.

But we don’t know, which is one reason the Desjardins’ argument that they have already prevailed may not succeed. “We’ve already proven … that this wasn’t our squirrel,” Mr. Desjardin said. “It’s not a pet.” He seems to be saying they proved they weren’t in “possession” of the animal for purposes of the criminal statute, but even if that is true, it still might not be relevant to the civil suit.

It used to be the rule that if you “kept” a wild animal, you were strictly liable for any harm it caused. So even if, let’s say, the plaintiff walked right by a sign that said “DO NOT STAND CLOSE TO THE BEARS” and then was attacked by one of your bears, you, the bearkeeper, would still be on the hook. But Virginia got rid of that rule long ago. See Panorama Resort v. Nichols (Va. 1935) (granting defendants a new trial; plaintiff allegedly stood close to the bears despite sign saying “DO NOT STAND CLOSE TO THE BEARS”). So, presumably, Felice is suing for negligence.

Sometimes proving the defendant violated a statute is enough to show negligence (“negligence per se“). It is in fact illegal in Chesapeake to “keep or permit to be kept” any “wild or exotic animal … as a pet” without a permit, and squirrels are expressly covered. (FYI, so are “apodal reptiles,” which you may know as “snakes.”)1 I think we can assume the Desjardins didn’t have a squirrel permit, and it sounds like they’re arguing the state couldn’t prove they were “keeping” the squirrel as a “pet.” But for one thing, the burdens of proof in criminal and civil cases are different—ask O.J. Simpson. So even if the state didn’t prove its case beyond a reasonable doubt, Felice could still try to prove his by a preponderance of the evidence.

And that only matters for negligence per se anyway; he could still try to prove ordinary negligence. For example, let’s say a squirrel you’d never seen before ran into your front yard, and you decided that was the perfect time to try out the ray gun you got for Christmas. So you zap him with like a hulkawatt2 of gamma radiation, and he mutates and destroys the neighborhood. It doesn’t make any difference whether it was “your” squirrel to begin with, or whether you violated some law; you were still negligent, because you know what gamma radiation can do, dork. The equivalent here is surely a lot duller, but remember he’s alleging they “encouraged” it to approach humans. I’m not sure how you’d prove any encouragement actually made a difference (call a squirrel expert?), but I don’t think the criminal case means he can’t try to do that.

I’m also not sure how a squirrel could do $90,000 in damage, but I guess it’s not impossible. Maybe the squirrel expert can shed some light on that also.

1 Before anybody writes in to correct me on the grounds that there are in fact apodal lizards, that is true but, so far as I can tell, there aren’t any that are more than eight feet long. So I still think they should have just written “snakes.”

2 The amount of gamma radiation required to cause any creature to undergo the Hulk mutation [amendment for scientific accuracy pending]. Obviously.

UPDATE: Birthers’ Record Is Worse Than I Thought