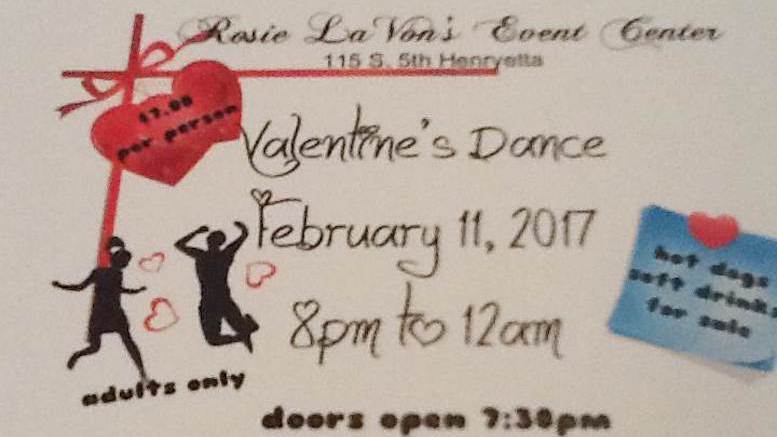 CANCELLED DUE TO CHURCH PROXIMITY

A Valentine’s Day dance had been planned for last Saturday night in Henryetta, Oklahoma, but that was cancelled thanks to the good work of Robbie Kinney, the woman who called attention to a city ordinance precluding “public dance halls” within 500 feet of a church. Rosie LaVon’s, the site where the alleged criminal conspirators had planned to meet in order to “dance” and God knows what else, is only 300 feet from the nearby Church of Christ.

After Kinney blew the whistle, the organizer decided to cancel, despite something less than overwhelming support for Kinney’s position.

“Other than her,” said Joni Insabella, who owns the venue, “nobody objected, not even the church.” Then who cares what Kinney thinks? Insabella’s husband, apparently, who she said advised her to cancel the dance. Why would he advise that? “He’s the city attorney,” she said, “and he swore an oath to uphold the law.”

Kinney, too, insisted the letter of the law had to be enforced. “I’m sorry,” she told NBC, “but the law is the law. Law enforcement does not have the right to pick and choose which laws they are going to enforce, no matter how ridiculous they are.”

She was neither sorry nor correct.

First, we should look at the law itself. Does it really preclude dancing within 500 feet of a church, or is this one of those made-up stories of which so many dumb-law books other than The Emergency Sasquatch Ordinance are filled? No, this one’s real, although it targets dance halls, not the dancing itself.

Section 9-403 of the town ordinances says “No public dance hall shall be permitted where the same is located within 500 feet of any church or public school.” What’s a “public dance hall”? Any place where a “public dance” is held (as well as “all adjoining rooms, hallways or other appurtenances,” so don’t try dancing there either). Okay, so what’s  a “public dance”? That, says section 9-401, is any dance “to which the public generally may obtain admission,” as opposed to one where admission is “based upon personal selection or invitation.” Just to make clear that these private dances are permitted, another section specifically exempts them from the law. 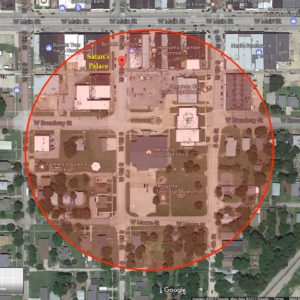 One of Henryetta’s many dance-hall exclusion zones

Now, this is not an anti-dancing ordinance or an effort to protect local churches from the sin radiated by people who dance. After all, it doesn’t say “no dancing shall be permitted within 500 feet of any church,” so the Red Zone could be totally packed with sweaty writhing dancers and this law wouldn’t apply. The law aims to keep the zone clear of a particular kind of establishment, though it’s probably more accurate to say it was intended to shut down a particular establishment. “This ordinance was put in place back in the 1970s when there was a troublesome dance bar on Main Street,” the mayor said, “and it’s never been enforced.” Except against the troublesome dance bar, I assume—as you can see above, the Church of Christ is almost exactly 500 feet from Main Street, so my guess is that’s where said dance bar was located. Church and school protection, in other words, may just have been an excuse to get rid of a business they didn’t like. It hasn’t been enforced since then, the mayor likely meant.

But wait. Whether it’s been enforced in the past doesn’t matter, at least according to Robbie Kinney. The law is the law, and it must be strictly enforced no matter how ridiculous. Right?

For one thing, it’s not always clear what the law is. Laws are written by people, and some of those people aren’t very good at it. Like, possibly, whoever wrote section 9-405, “Attendance by Minors.” That section first makes it unlawful to allow any person under the age of 14 to attend a public dance. The next sentence says “[i]t is lawful for any person under the age of 18″ to attend, “unless such person be in company with and attended by a parent or guardian.” Emphasis added. Apparently, somebody wanted to make sure 15- to 17-year-olds were not accompanied by a parent or guardian at public dances? Seems a little creepy, but the law’s the law. Or maybe sometimes it isn’t?

Section 10-413 makes it unlawful “for any person to be about in the immediate vicinity where a person or persons are gambling….” Is it constitutional to punish someone just for being near an illegal activity? Don’t think so. It sure isn’t constitutional to punish someone just for being “disrespectful” to a police officer, or to “use abusive or indecent language toward or about any such officer….” (10-610). The main point of the First Amendment was to protect the right to tell a government agent to go f*** himself (or words to that effect), wasn’t it? So this won’t do. Also unconstitutional, and maybe unsurprising, is the ban on “immodest dancing” at public dances (9-410). The ordinance uses the terms “indecent or vulgar,” but these too are undefined. It’s apparently up to the Chief of Police to decide what dancing is acceptable, and that always goes well. The “insulting signs or language” ordinance (10-302) also seems to be not very enforceable.

Weekend funerals are illegal in Henryetta, unless it’s an emergency (11-312(B)). It’s unlawful for any person to play on the sidewalks unless specifically authorized by ordinance (14-204). It’s also unlawful to cross the street under any circumstances unless your path is “at right angles to the curb” (15-1004). Since the law must be enforced as written, I assume no deviation from 90 degrees will be tolerated.

The point, of course, is that some common sense is often required when interpreting laws, and people should use it; and also law enforcement does have an enormous amount of discretion to “pick and choose” what laws they are going to enforce. That discretion can certainly be misused, but the risk is pretty low if they’re choosing not to enforce a law that’s ridiculous or unconstitutional—and there are an amazing number of those laws on the books, believe me.

This one may not be around much longer, at least, because the mayor says they are likely to repeal it at the next city council meeting. Given her commitment to the letter of the law, maybe Kinney will get herself a protractor and start checking pedestrians. The law’s the law!

Lawsuit Demands End to Use of Term “Inmate”

Kansans Wanting to Marry a 12-Year-Old Must Act Quickly