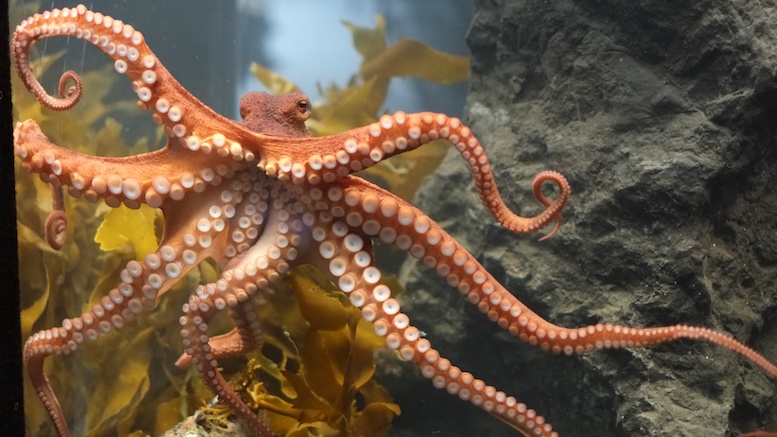 He writes with all eight arms and it reads that way 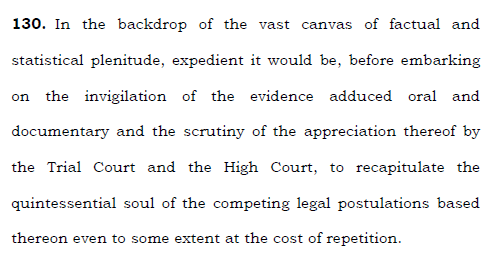 Man, I’m starting every appellate brief I write this way from now on. I only wish I had come up with it myself. But that, my friends, is the work of the Supreme Court of India. And it is only one of the 552 paragraphs in the 570-page opinion in State v. Jayalalitha.

There are other good ones, but Paragraph 130 I think captures the quintessential soul of this masterpiece of judicial invigilation.

The Supreme Court of India is, it turns out, well known for this sort of thing. In this 2016 piece (“Justice by Thesaurus”) by Tunku Varadarajan, who tweeted a link to Jayalalitha today (@tunkuv; RT by @surlyhobbit), he describes being “flabbergasted” by a similar eructation from the same court. The first sentence of that opinion read thusly:

“This sentence is so convoluted,” he wrote, “and so riddled with adjectives, as to be impenetrable to lawyer and lay reader alike. It is among the worst sentences I’ve encountered in all my [25] years of reading legal materials.” That’s saying something, let me tell you. But, as he quickly admitted, he had spoken too soon: “I was too hasty in concluding that the first sentence of this judgment was notably awful,” he wrote later in the same post. “The very next sentence is even worse, surpassing the first in verbosity, obfuscation, flabbiness, meandering length, and analytical ineptitude.” He was not wrong.

It was briefly tempting to speculate that the court might have taken his criticism to heart, because the first sentence (and paragraph) of Jayalalitha is just “Leave granted.” The second paragraph begins “These appeals project a challenge” and includes the phrase “the gamut of the imputations,” but its floridity is otherwise disappointing. It takes the court a while to get rolling, maybe because the case has been pending for so long—it involves corruption charges dating back to the late 1980s—that the court has to devote a lot of space to the allegations and case history. In fact, as shown above, not until Paragraph 130 (at p. 208) does the court complete that task and begin to recapitulate the competing legal postulations. And wow, does it ever recapitulate them.

It took some time to figure out what this case was about, which is part of the problem with this kind of writing. If I understand correctly, the respondents were convicted of corruption and ordered to forfeit what appears to be a very large amount of property and cash. (I haven’t tried to convert the numbers, but I think that’s a fair inference given that the listing and discussion of the assets makes up a significant part of this 570-page opinion.) Their conviction was reversed by the High Court, and the state then appealed to the (even higher) Supreme Court.

Should any reader survive to reach Paragraph 530 (p. 547), said hypothetical reader would learn that the Supreme Court has reversed the High Court’s decision, reinstating the convictions. He or she would learn this again in Paragraph 538 (p. 556), and yet again in paragraph 542 (p. 562). There are many words between these three conclusions, but I’m not sure any are necessary. To cut to the chase, the result is that three of the four respondents are ordered to surrender to the trial court to comply with the original sentence. (The fourth managed to avoid responsibility by dying while the case was on appeal.)

At long last, one reaches paragraph 544 (p. 563)—the fourth conclusion—in which the opinion ends as it began with one brief sentence: “The appeals are allowed in the above terms.”

Yet still that is not the end.

After 570 pages, Judge Amitava Roy steps forward to add what we would call a “concurrence,” in which a judge who agrees with the result writes separately because he or she feels there is something more to be said. Or, as Judge Roy puts it (in passive voice), “A few disquieting thoughts that have lingered and languished in distressed silence in mentation demand expression at the parting with a pulpit touch. Hence, this supplement.”

This supplement, which is worth reading in full (seven pages):

“The octopoid stranglehold of this malaise”!

“The variegated cancerous concoctions of corruption”!

“The asphyxiating snare of this escalating venality”!

“The pernicious menace from moral debasement of the culpables”!

“The militant dominance of this sprawling evil”!

Did H.P. Lovecraft write this opinion?

At least this was only a concurrence, so if you didn’t want to slog through it to get to the holding, you wouldn’t have to. And maybe Judge Roy just had some money left over from last year’s adjective budget he needed to use up. That might explain the concurrence. But though the majority opinion is less florid on average, it is terrible in many other ways. The writing (most of which I obviously spared you) is complex, wordy, difficult, and time-consuming to read, and often it’s not even clear what the court is trying to say. And what’s with the vocabulary? There’s an American judge who has admitted he deliberately uses little-known terms in his opinions because he thinks an extensive vocabulary is important. Fine, but why is a judicial opinion the place to teach it? They’re hard enough to read as it is.

Bad writing has real costs, not just in terms of the billable hours required to read and figure it out (somebody owes me about $1,500, by the way), but also because court opinions can amend or establish legal rules and so it’s important for everyone to be able to understand what the hell those rules are. It’s equally important, of course, for lawyers to give judges legal writing that takes less time to figure out and so makes their lives easier. Good communication is critical. Expedient it would be for lawyers everywhere to invigilate on that.

Chinese Government Lists What Not to Do During Olympics

And This Is My Pet Unicorn, Mr. Carrot Pretty Lashes