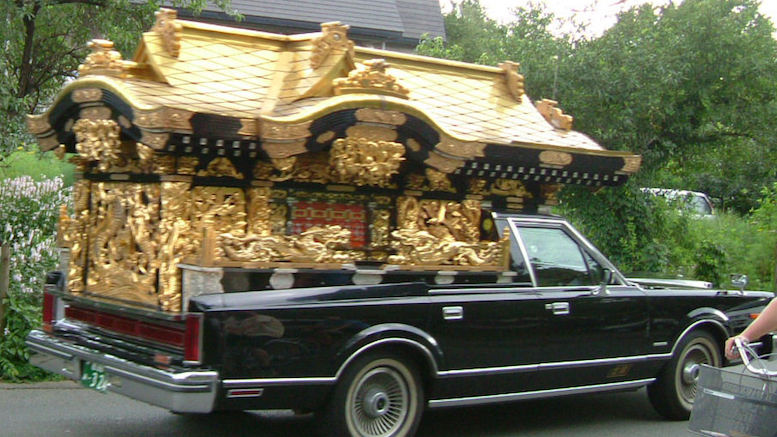 If all such vehicles looked like this, there'd be fewer mistakes (image: Ümit Yaldiz, via Wikipedia)

Police say a California man promptly decided to return a van he had just stolen after noticing that it had a dead body inside. Since he had stolen the van from a mortuary, it’s a little surprising he didn’t check to see if the van was occupied before he drove it away, but he has now learned that lesson.

We know this because he then stole a second van from the same mortuary, and that one was corpse-free.

The crime was committed in the early morning of February 13, according to the Riverside Press-Enterprise. The van’s driver had “just picked up a decedent” and had returned to the mortuary to pick up some paperwork, a police spokesman said. It’s not clear to me where he (the driver) was bound for next, but he was clearly planning to go somewhere because he left the keys in the ignition. While he was inside, the suspect hopped in the van and drove off.

Sadly, there are no details about exactly when, where, or how the suspect realized he was not alone in there. (I’m imagining a pretty solid double-take, and finding it very amusing.) We know it didn’t take long, because he was back within an hour. But by this time, the heat was on:

About an hour later, an officer at the scene investigating the theft was flagged down about a different van that had just been stolen.

[The spokesperson] said [the suspect] had noticed the body and returned the van to steal a different one. An employee saw and tried to stop him, at which point the suspect tried unsuccessfully to run that person over.

The officer at the scene pursued the second stolen van to the intersection of Linden Street and Canyon Crest drive about 2 1/2 miles from the mortuary, [where the suspect stopped and gave up].

The puzzle here, or one of them, is why the suspect apparently wanted a mortuary van in particular. I assume there are lots of vans perfectly suitable for stealing in Riverside, so he could have just abandoned the van anywhere and tried again. (He could have called in an anonymous tip if he didn’t want to leave his passenger stranded.) But instead he returned to the scene of the crime, where a police officer was waiting. He didn’t know for sure that the theft had been discovered, but it seems like he was waiting around at the mortuary for the chance to grab a van, and so should have known the driver had just gotten out.

We could speculate that he wanted to do the right thing and return the body to where he found it, but that would be pure speculation.

Is it illegal to steal a dead body? Well, of course. What kind of question is that?

Not only is it stealing, it will usually also violate some more specific law, like one of California’s body-snatching statutes.1 The relevant portion of the code, for example—and I’m linkin’ to it, but you probably don’t wanna read it—makes it a crime to remove human remains from any place where they have been interred (or are awaiting interment) without authorization, if done “with intent to sell … or to dissect” or with “malice or wantonness.” Knowingly disturbing or removing remains “from any location other than a dedicated cemetery” without authorization is a misdemeanor. Theoretically, both of those could apply here, but police said the suspect wasn’t charged under these laws because there was no reason to think he knew about the van’s contents.

Do people still snatch bodies for such purposes in this day and age? It seems doubtful, but far be it from me to overestimate humanity. In fact, though, I found almost no recent cases in the annotations to these statutes—with one exception. Just last year, the California Court of Appeal affirmed the conviction of a guy who stole nine 25-pound metal urns containing the remains of 11 people (sometimes people double up), because he intended to sell, not the bodies, but the urns. People v. Reid, 246 Cal. App. 4th 822 (2016). He discarded the remains and sold the urns for scrap. The issue in the case wasn’t whether he violated the body-snatching statute—there was no question he did. The issue was how many times he violated it.

The defendant argued he could be guilty of only one count, based on case law holding that stealing multiple things at once is a single offense. Nice try, the court responded, but human remains aren’t “property” under the law, and we’re not about to extend the prior case law to help out a body snatcher.

The urns, on the other hand, were property, and again the defendant argued he could only be guilty of one count of grand theft for stealing those, because he stole all nine during a single “spree.” Again, nope. While the court conceded this was a single spree at least in a sense, it noted that there were “nine separate victims” (not 11, so presumably it meant the next-of-kin), and emphasized that the urns were heavy and so the defendant had to steal them one at a time.

I think the lesson there again is that if you were convicted of body-snatching, don’t expect the Court of Appeal to do you any favors.