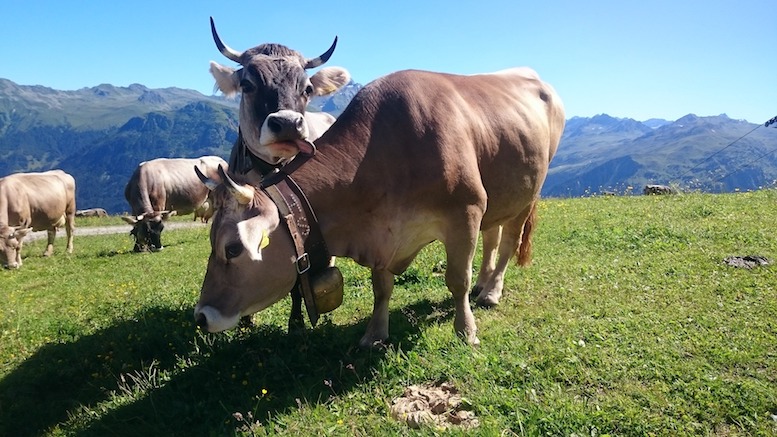 To be fair, they aren't unarmed, either

Given how important the wording of laws and judicial opinions can be, and how we often obsess over language, it’s kind of remarkable (though maybe mostly to Americans) how legal systems can function perfectly well even when multiple languages are involved. After all, everybody is still bound by the same laws (or all poor people, anyway), even though meaning can often be lost in translation.  And yet societies that have more than one official language seem to do just fine.

This thought was generated by researching this story about a guy in Switzerland who was convicted of threatening cows with a revolver.

As you would expect, most of the reports I see, or that readers send me, are in English. Or at least you would expect that if you assume (correctly) that English is the only language in which I’m fluent. (Could survive with help if required to speak only Spanish; could probably discuss weather or get myself arrested in Russian). I always try to get local reports or original documents if I can, which of course is more difficult if those weren’t in English. But I did manage to do that here.

The English-language report a reader sent me (and thanks for that) made the basic facts clear enough: a man in Toggenburg, St. Gallen, Switzerland, got sick of somebody’s cows wandering onto his land, where they repeatedly trampled and ate the plants in his garden. In June 2014, his patience finally snapped, “and he pointed his gun at the cows, saying he would kill them if they did not leave.” He was later convicted of violating firearms and “public order offenses” and fined 14,000 Swiss francs. He appealed, but the Swiss federal court affirmed.

Well, most of the basic facts. There was no suggestion here that the man threatened the herd’s owner or harmed any of the cows. But the owner must also have been present, because I assume the cows weren’t the ones who complained to police. So, as is so often the case, there seemed to be more to the story.

Looking for more reports, I found this one in Le Matin. I had to have Google translate it from French, and I actually like the result a lot better:

An owner domiciled in Toggenburg (SG) is definitively convicted after brandishing his revolver against cows. He could no longer bear the inconvenience of passing cattle in front of his house.

The Saint-Gallois did not like to see the cows taste his plantations and trample around his garden when the neighboring peasant led them to graze. Outside of him, he had one day festered.

He had gone to fetch his revolver, which was loaded, and pretended to want to kill the cattle. Then he had not hesitated to say aloud that he was going to kill these beasts.

When the hungry cattle moved, a gardener grabbed the gun and threatened the ruminants. But he was not allowed to do so, the Swiss court in Lausanne said. According to the verdict, it is not allowed to threaten with a revolver to scare cows from its ground.

So at this point I really wanted to see a copy of the opinion itself. I found one, but in German (English is not one of the four official languages there), so I had to enlist Google again. (This obviously is not a problem for me, since as you can tell I find the translations oddly and perhaps childishly entertaining.)

The opinion makes clear that the herd’s owner was indeed present: “[O]n 17 June 2014 the [defendant], when a cow was feeding on its planting, swung a loaded revolver over the head of the complainant and his cows and had targeted the cows several times. He said that he would shoot at the cows, and the complainant [or his cows?] should be careful not to sniff or eat his plants.” That was the owner’s testimony, anyway, and the lower court found it credible. Appellate tribunals usually won’t overrule a finding like that, and this one didn’t, agreeing that the cow-threatener’s contrary testimony was “vague [and] evasive.”

Having dealt with the facts, the tribunal then turned to the more interesting issue: the defendant’s argument that he acted in self-defense.

The tribunal says acting in self-defense may be justified if a person is attacked or directly threatened with attack, or in an “emergency” to protect property if “the saved legal property is more valuable than the legal property infringed….” The threat can be posed by an animal, but here there was no evidence the cows were threatening anything but the garden. So this was an “emergency” situation, not self-defense. The problem was that the legal property (or right) he was protecting was a garden, which the tribunal considered less valuable than a person’s right to avoid possibly being shot.

Also, the response to a threat has to be proportional anyway, and here, the tribunal found, threatening to shoot the cows and/or their owner “certainly does not constitute the mildest possible means of security.” Maybe help the guy shoo his cows away, the tribunal suggested (though barbed wire might be a better suggestion). In any event, it noted, it’s not likely the cows “understood the threat with a weapon … and therefore could not be deterred [by it] from entering the [defendant’s] property.”1

Well, they might understand it once you make an example of the lead ruminant, but that’s apparently against the law.

There She Blows! ‘Tis the Contract for Moby Dick!

Man Who Lost Hand to Gator Is Charged With Unlawful Feeding