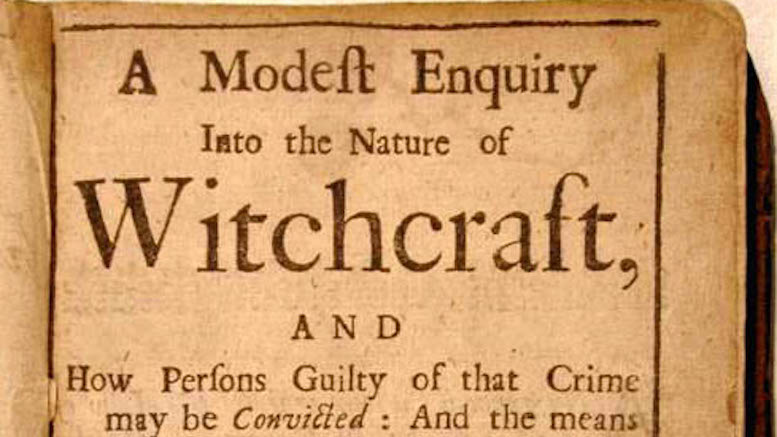 Prof. Eugene Volokh has somehow come across one of the ordinances of Joplin, Missouri, and noted that the ordinance makes it illegal for practitioners of “crafty science”—very broadly defined—to advertise:

Any person who shall advertise by display of a sign, circular or handbill, or in any newspaper, periodical, magazine or other publication, or by any other means, to tell fortunes or reveal the future, to find or restore lost or stolen property, to locate oil wells, gold or silver or other ore or metal or natural products, to restore lost love, friendship or affection, or to reunite or procure lovers, husbands, wives, lost relatives or friends, or to give advice in business affairs, or advice of any kind or nature to others for or without pay, by means of occult or psychic powers, faculties or forces, clairvoyance, psychology, psychometry, phrenology, spirits, mediumship, seership, prophecy, astrology, palmistry, necromancy or like crafty science, cards, talismans, charms, potions, magnetism or magnetized articles or substances, oriental mysteries, crystal gazing or magic of any kind or nature shall be deemed guilty of a misdemeanor.

That’s section 82-15(a), anyway; subsection (b) also makes it illegal to obtain money or property “by fraudulent devices and practices in the name of or by the means of spirit mediumship, palmistry, card reading, astrology, phrenology or like crafty science, or fortunetelling of any kind,” which is arguably narrower.

Prof. Volokh notes that laws like these (which are not uncommon!) have been held to violate the First Amendment to the extent they criminalize activity that isn’t fraud—if the person sincerely believes what he or she is doing is real then there would be no intent to deceive (and if both parties understand it isn’t real, no deception). See, e.g., Village of Schaumberg v. Petke, 373 N.E.2d 716 (Ill. App. 1978). But mainly he wants to point out the term “crafty science,” which he says appears in Canterbury Tales (14th century) and has been in statutes dating back at least to 1531.

What is “crafty science,” exactly? Good question.  The OED says “crafty” originally meant “strong” or “powerful” (in German languages, or Old English cræftig, if you care), but gradually took on a more negative connotation. Or maybe not that gradually, since it gives an example of the word wiccecraeft dating back to about 1100. “Science” also didn’t mean what it means today, of course; back in the day it just meant “knowledge” or “learning.” (Latin scientia). So, “crafty science” seems to have been a general term for any sort of knowledge that maybe good Christians weren’t really supposed to have. In Canterbury Tales it refers to alchemy, for example, but as these statutes suggest, there are plenty of other things that might also qualify as “crafty science.”

“Crafty science” in literature over the years (Google Ngram)

Of course, those of you who had the good sense to buy my book (or the even better sense to borrow it from somebody who did) already know this, because I discussed Canada’s anti-crafty-science statute there. It isn’t clear what Canada means by the term, either, although its law says “occult or crafty science,” and presumably those are the same thing.

Joplin’s ordinance is no help at all. Subsection (a) says it’s illegal to advertise, among many other things, “necromancy or like crafty science.” Well, that seems to limit crafty science to necromancy or something like it, but I don’t know what that something would be. Necromancy, technically speaking, is (OED again) “predicting the future by supposed communication with the dead,” but what’s something like it? Raising the dead to ask for fantasy football advice? And what does a dead guy know about the future, anyway? Who falls for that? Also, subsection (b) then says “phrenology or like crafty science.” Aha! Maybe crafty science is raising the dead to predict the future by feeling the bumps on their heads.

Well, I get the sense that nobody in Joplin really had a clue what “crafty science” meant. I’m sure the same is true for “oriental mysteries” (and I find it amusing for different reasons that “psychology” is also on the list). So, again, “crafty science” was and is basically a catchall term for any field of mysterious knowledge of which people are suspicious and a little fearful.

Probably it’s used a lot at the EPA these days.

While it’s not too uncommon for local ordinances in the U.S. to prohibit “crafty science,” it doesn’t look like any state currently does. Only New Jersey turned up in a Westlaw search for that term, and that law was repealed in 1978. The search turned up 12 U.S. cases in which the term appears, five from New Jersey, five from Illinois (Chicago also had or has a “crafty sciences” ordinance), a New York case from 1809, and a 2001 U.S. Supreme Court case—although sadly it only used the term in a historical reference. No other case since Schaumberg (1978) has mentioned it, so the term seems to be moribund.

There are a fair number of statutes and cases on the same general topic, but again I was just interested in the phrase “crafty science.” There is actually a law-review article with that phrase in the title, but it uses the term broadly and is (I suppose appropriately) more interested in the freedom-of-religion issue than the terminology. See Christine A. Corcos, “Seeing It Coming Since 1945: State Bans and Regulations of ‘Crafty Sciences’ Speech and Activity,” 37 T. Jefferson L. Rev. 39 (Fall 2014) (part of the “Law and Magic Symposium). I would recommend that article if you’re interested.

I would not recommend another article I came across, “What Ghost Up Must Come Down: The Highs and Lows of Psychic Mediums in Probate Law,” 29 Quinnipiac Prob. L.J. 310 (2016), but only because of the title.

Yet Again, Gravitational Risks Held to Be “Obvious”

If You’re Greek, Someone Probably Just Stole Your Identity