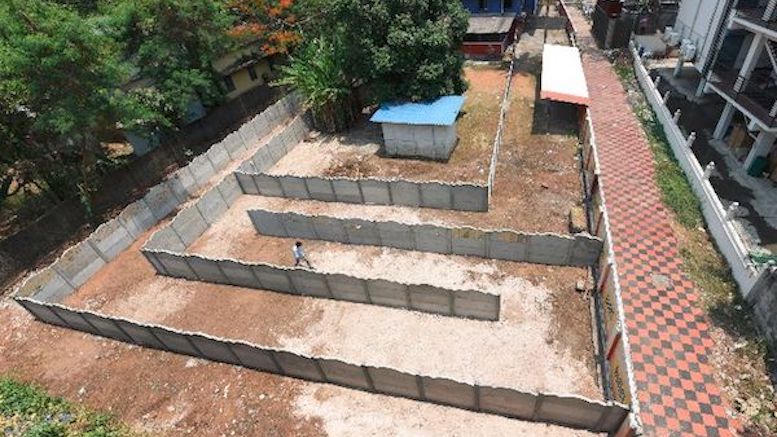 Depends how you measure it 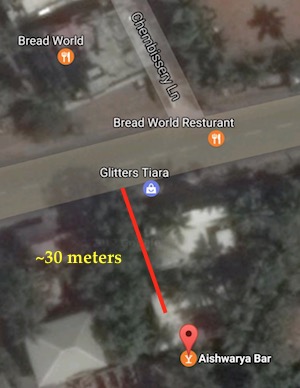 In December, the Supreme Court of India banned the sale of liquor along national and state highways, specifying in its order that no liquor store may be visible from a highway, directly accessible from a highway, or “situated within a distance of 500 metres of the outer edge” of said highway. Because the order (which took effect April 1) applies to stretches of such highways inside towns and cities, not just between them, it is potentially a real problem for many existing businesses.

That includes the Aishwarya Bar in the state of Kerala, which as you can see here (right) is well within the 500-meter distance requirement.

The bar isn’t visible from the highway, being semi-safely hidden by trees and the “Glitters Tiara” clothing store (and by the way, “Bread World,” which frankly sounded like the most boring restaurant ever, sells more than just bread), and it also does not seem to be “directly accessible,” at least by car. But it is only about 20 or 30 meters from the highway—measured as the Indian jungle crow flies. As you can see above, however, Indians are at least as clever as Americans when it comes to exploiting loopholes, and at least some of them are just as fond of drinking.

The motivation behind the court’s action is clear. Just as in the U.S., alcohol is involved in a big percentage of fatal accidents in India, and governments struggle to keep this under control. The Court’s authority to craft this kind of a rule isn’t totally clear to me, and as you know I’m a world-renowned expert on pretty much everything. To some extent, this might be due to the Court’s famously opaque writing style, although this opinion is far from its worst. See “Luxuriate in the Octopoid Embrace of These Legal Postulations” (Feb. 15, 2017).

There is a federal law restricting liquor stores along national highways, and the Court also cites Article 47 of India’s constitution (it has 395!), which says the State has a duty to “improve public health … and, in particular, … shall endeavour to bring about prohibition except for medicinal purposes of intoxicating drinks….” So it looks like the Court concluded there’s no basis for exempting state highways (or parts of national ones) from the federal law. Okay, but it is still unusual, or would be here, for a Supreme Court to get into specifics like the “500-meter” rule. The Court said in its order that this was necessary, though, to ensure people don’t get around the ban “by the adoption of subterfuge.”

People are good at subterfuge, though. And the Court’s order says only that “[n]o shop for the sale of liquor shall be … (iii) situated within a distance of 500 metres of the outer edge” of the highway or a service lane along it. It doesn’t say how that distance is to be calculated. Hence, the maze.

“We have done nothing illegal,” the bar manager was quoted as saying. “[W]e have constructed an extended way to reach the bar,” he said. According to the report, the maze is “250 meters long,” but that must be measured end-to-end without accounting for twists and turns. All told, those apparently require thirsty patrons to walk the 250-meter distance twice, roughly, so that adding in the 20 meters from highway to maze entrance, the manager said, “[n]ow it is 520 metres from the highway.” (He said the maze took three days to build. Painting lines on the ground might have been quicker, but I suppose people might have trouble following them.)

This seems totally fine to me. Presumably the point was to make it more difficult for people to reach a bar, so they can’t just pull over, grab some booze and go. With the maze they have to get out of their cars and walk 500+ meters, just like the Court said. Compliance achieved. And according to the report, local officials agree. “We do not measure the aerial distance,” one said, “but only the walking distance.” He said the bar would be fined for altering the entrance (presumably without a permit), but will be allowed to stay where it is.

This is great news for maze-builders, of course, but also suggests (as does history) that maybe the policy of prohibition is a little misguided. After all, if large numbers of citizens are routinely flouting a rule, and that is generally tolerated, the rule might not be a very good one. It also strikes me that it might be a good rule of thumb to say that something is probably amiss somewhere if your citizens have suddenly started building mazes all over the place. You might want to look into that.

“Bound by Honor to Defy a Judge … and Eat a Document”