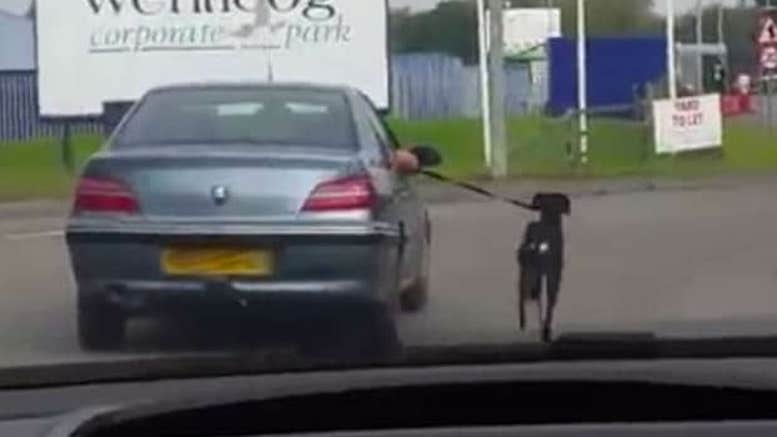 Of course I know you would never do that, but some apparently do.

You wouldn’t do that because you (1) don’t hate dogs and/or (2) have some common sense (and/or possibly because (3) you don’t own a car), but also because (4) you may remember me bitching about this very same thing several years ago. See “Laziest Man in the World Is Not American” (Mar. 3, 2010) (reporting that an English person had pleaded guilty to charges arising from doing this). Looks like it’s time to bitch again, because I am informed that there have since been at least two further cases in which people have been caught doing this.

Also because one of them is an American and so my previous headline is now out of date.

By 2013, the practice had spread to Canada, based on the evidence presented in this story, including this video (taken by Andrew Matte):

Although it isn’t shown in the video, Matte said that the driver took more than one left turn during the 15 minutes he followed him, and that when he did so he would “nudg[e] the dog at the shoulder with the tire of his moving vehicle….” And for at least part of the time, the driver was on his cell phone. It’s a little surprising no one dragged this guy out of his car and pummeled him, but Matte did call the police. According to the news report, “the driver told officers he was walking the dog for a friend”—presumably now a former friend—and “agreed to never walk an animal in that manner again.” In addition to possible animal-cruelty charges, police said, doing this potentially violated reckless-driving laws.

By 2016, the dumbness had spread to the United States.

Of course, it’s entirely possible it arose separately in each location, a phenomenon scientists call “parallel” or “convergent” evolution. For example, the thylacine or Tasmanian wolf was similar in many ways to North American dogoids because they filled the “same ecological niche,” although they are completely unrelated. (Somewhat ironically, I assumed I had just made up the word “dogoids” to refer to members of the Canidae family, but it turns out somebody else thought of it independently, and we are also completely unrelated.)

In the same way, it is possible that because of similar environmental conditions such as the availability of cars and reality TV, completely unrelated humans on different continents1 have evolved or devolved in a way that makes them all too wide, lazy, and/or stupid to GET OUT AND WALK THEIR GODDAMN DOGS ON FOOT as did the earlier human species we somehow replaced.

Whatever the explanation, the 2016 American case, in Stockton, California, also involved a video taken and posted by someone who was astounded to see a driver doing this. In this case, there was no evidence the dog’s owner was “nudging” it with a tire, but the car was going fast enough that the dog needed to run to keep up. The witness, Amanda Brajkovich, confronted the owner, who defended herself on the grounds that she was closely watching the dog’s leash to make sure there was “no tension on it.” She then drove away, presumably in a hurry to see what the Kardashians were up to.

Police were called in that case, too, and they concluded the video did not show actual evidence of “animal cruelty” but said if they had witnessed it they’d have cited her for distracted driving. It’s probably true that this would not be felony animal cruelty under Penal Code section 597, which requires actual injury or suffering to the animal. But section 597.1 provides that any owner who “permits the animal to be in any building, enclosure, lane, street, square, or lot … without proper care and attention is guilty of a misdemeanor,” and that certainly would apply here. So, at least in California, this is a crime, and I would bet all 50 states have a similar law. No need to wait, in other words, until the dog is actually hurt or killed.

I haven’t researched yet whether it’s permissible to use force to prevent harm to a third party if the third party is a dog, but if I saw someone doing this I probably wouldn’t stop and check Westlaw first.

1 I have since found a few others. Here’s a YouTube video of another case, date and location not given but somewhere in the U.S., based on the accents. I also found this report of two more cases in Wales and a report of one in Argentina (at least according to the Daily Mirror), all three likewise caught on video. Everybody cut it out.

Whereas, South Florida Should Become the 51st State

Another Incident of Taco-Related Violence

Benny the Bull In Trouble Again