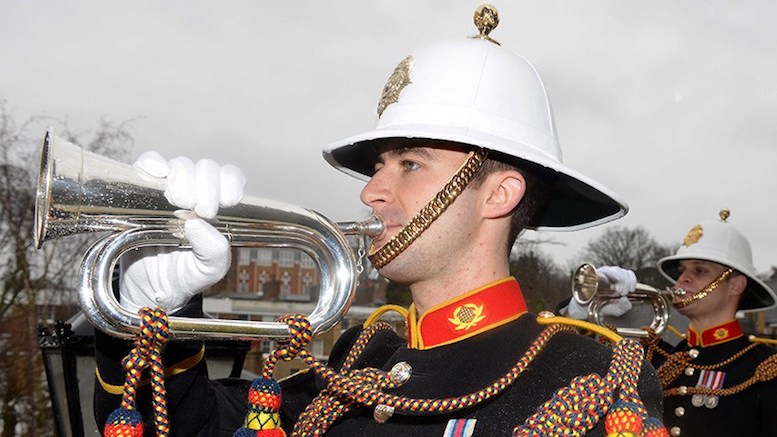 Be on the lookout

This was tweeted by @youhadonejob the other day: 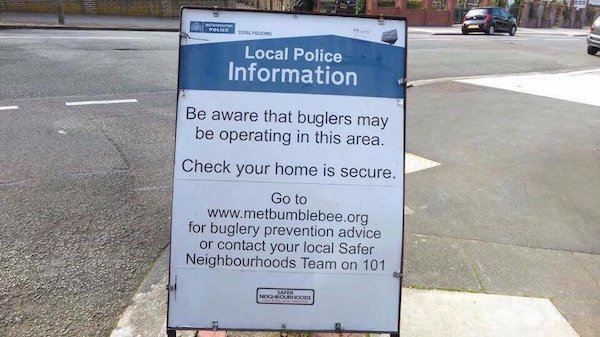 If a bugler was operating in your area, you’d know it, wouldn’t you? Especially if he got inside your home. And man, the last thing you want is a gang of buglers in your neighborhood. Once that hits the papers your property values are screwed.

The sign, if it’s real, would have appeared in London a few years ago. It mentions the Metropolitan Police, and www.metbumblebee.org led to a real but now-defunct page about a burglary-prevention program that was, for some reason, called “Operation Bumblebee.”

“Burglary” was spelled correctly throughout that page, so this was a sign-maker issue, I think.

At common law, “burglary” was the crime of breaking into a house at night with intent to commit a felony. These days the time and type of building usually don’t matter. According to the OED, “burglar” is one of those words the Normans brought with them from France, which might explain why it seems vaguely ridiculous. Say it. Burglar. The verb form is “burgle,” or “burglarize,” which seems more American and much less funny. Even more ridiculous: the adverb used to be “burglarily” (e.g. “evill disposed person or persons, attempting to murder, rob, or burglarily to breake mansion houses” (1533)), which was bad enough, but the modern form seems to be “burglariously.” Thanks, France. 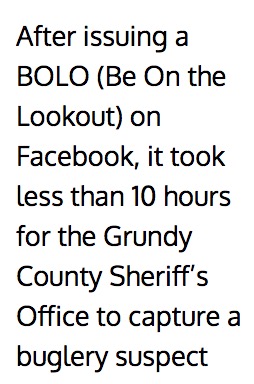 A “bugler,” of course, is one who bugles. “Bugle” is also French, although that word apparently comes from back when the noise was made with the horn of a wild ox (bugle, in French), which makes it seem a lot cooler. (They probably got that from the Germans.) But the OED just blew my mind by telling me that there’s no such word as “buglery.” Surely “buglery” is the art of playing the bugle? Nope, not there. One can certainly “bugle,” or engage in “bugling.” Perhaps you once “bugled.” But at least as far as the OED is concerned, “buglery” is not a word.

There is, however, no shortage of examples of “buglery” being used in place of “burglary,” such as in this item reporting that it took a sheriff’s office somewhere almost 10 hours to find a buglery suspect. I guess they’re smart enough to stop bugling when the heat is on, though.

Below is a random collection of various buglerizations I found on the internet. I only came across one other official example, but whoever that official is should hang his head in shame:

Hopefully it will have a greater impact than your high-school English teacher did.

Some of the spelling crimes were committed by people worried about (or reporting) buglery in their area:

Others were pretty clearly submitted by current or former buglers themselves:

I don’t remember what the “five-star” answers were. The answer to the first question is yes, eventually. The answer to the second I assume depends on what the Founders thought of buglery in 1789 and how that might have intersected with the Second Amendment, and probably also on whether it was actually aggravated buglery or not (get your story straight, man!). And what “aggravated buglery” might be.

Buglery is a worldwide problem, which is more understandable:

“[N]ot wages, buglery.” Well, Google is still a work in progress, isn’t it? The citations are to Romans 6:23 and 8:18 (King James Version): “For the wages of sin is death; but the gift of God is eternal life …. I reckon that the sufferings of this present time are not worthy to be compared with the glory which shall be revealed in us.” The phrase “but glory” does appear (once) in the Bible. Rom. 2:10. Neither “buglery” or any derivative of “bugle” appears there (or “burglar,” for that matter, though there are quite a few thieves).

I found two examples of “buglery” used to mean something entirely different. One dates to the 1930s—I’m going to assume you can figure out what the earl’s wife was upset about:

The other one is a play on “cutlery”—yes, utensils specifically designed for eating bugs: 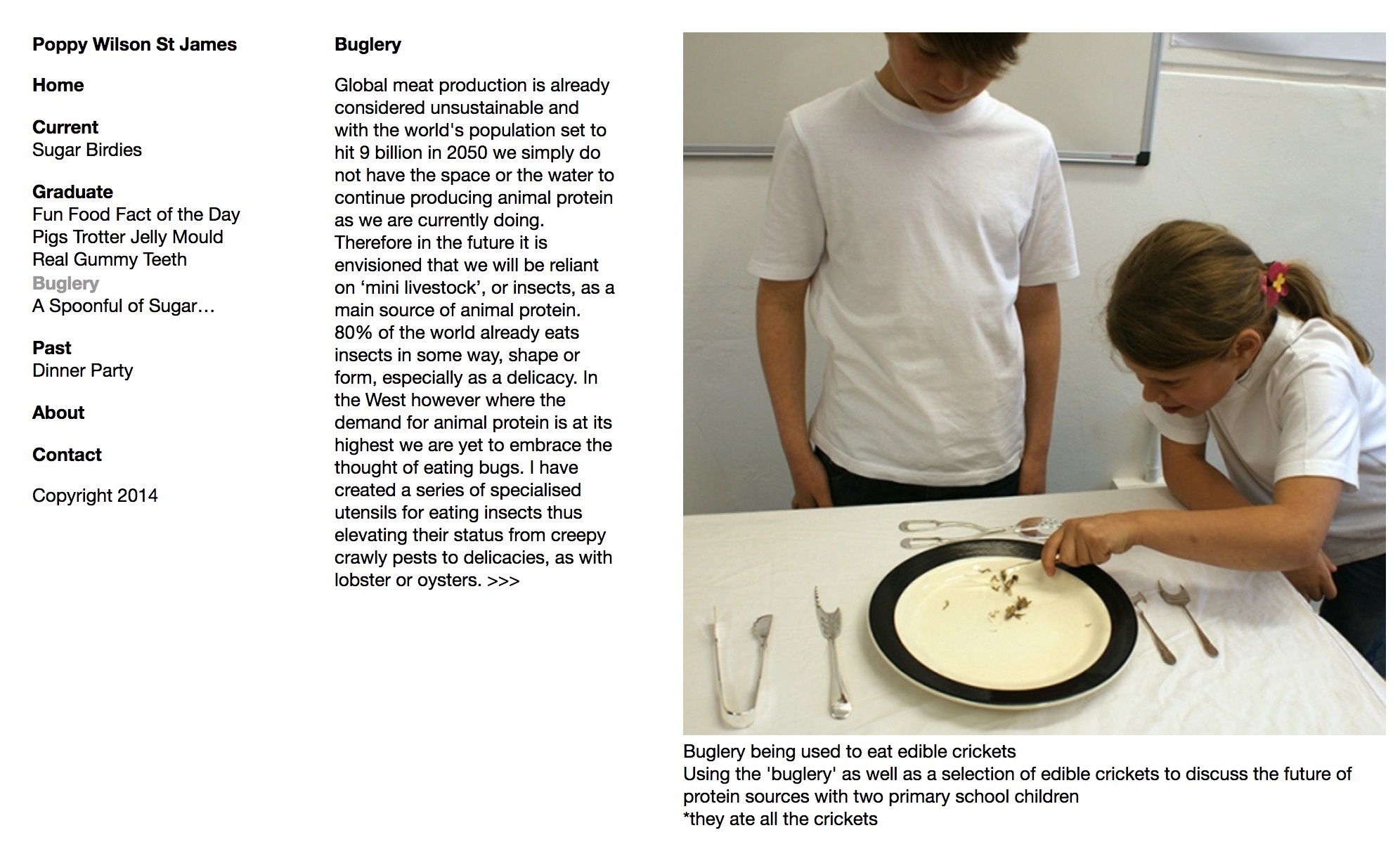 Finally, back to the law. Of course I ran a search for cases mentioning “buglery,” and you’ll be pleased (or not) to know there are very few (12?), and none involved errors by a court. Most of them, in fact, were erroneous hits on the word “Bugler,” which was once a tobacco brand. The two misspellings, sadly, were committed by a lawyer—in fact, the same lawyer, and even worse, it was because she cut and pasted the heading from a prior brief in a completely different case: 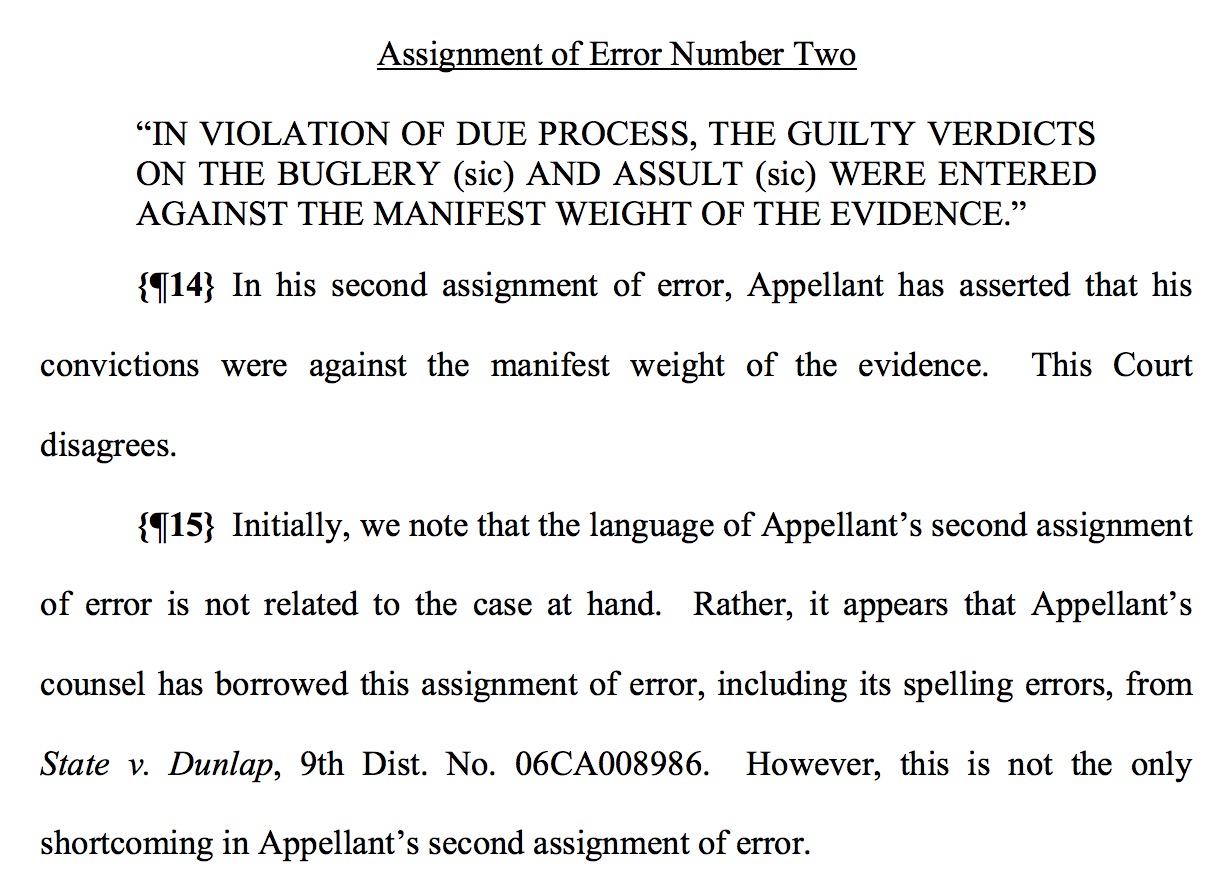 Creeps (Back) in the News