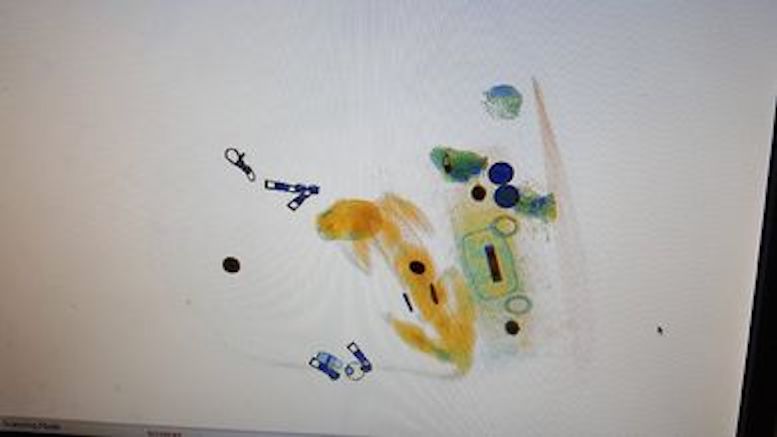 The monkey is the orange monkey-shaped blob in the center (image: mlive.com)

People try to bring monkeys into courthouses, or at least this one did:

Former Bay City [Michigan] resident Linda Stevenson on Thursday, May 18, visited the [Bay County Court] facility at 1230 Washington Ave. and put her purse on the X-ray machine at the building’s security station.

“I pushed the button for it to go through when it started making noises,” said Bay County Sheriff’s Court Security Deputy Pat McIver. “I was like, ‘What was that?’ She goes, ‘Oh, that’s my monkey.’

“I said, ‘I need to see your monkey,'” McIver said. “She unzipped her purse, the monkey stuck its head out and looked around, and then she zipped it back up.”

As MLive.com (via FARK) reported yesterday, the beast was a 10-month-old squirrel monkey named Apollo. Stevenson was at the courthouse for a small-claims matter, but McIver told her she couldn’t bring her monkey in with her. She took Apollo to her car, where she had for some reason not left him to begin with, and then completed her court business. Afterward, McIver asked her to bring Apollo back to the security station so some other staff members could see him. (Squirrel monkeys aren’t native to Michigan.) She obliged. According to the report, the monkey is sufficiently well trained that it would emerge from and return to Stevenson’s purse on command.

That’s neat, but still probably best to keep monkeys out of the courthouse unless maybe one needs to meet with his parole officer or something. According to the Natural Resources Defense Council, while it is legal to own monkeys in many parts of the U.S., they are not especially good companions. “I would never want one in my house,” the author quotes a primatologist as saying. “They’re very destructive.” Squirrel monkeys in particular “require an insane amount of care and attention,” the author says, speaking from experience. Also, “that thing you’ve seen on TV about monkeys throwing their feces? That’s a real thing,” he says. “You can also expect frequent masturbation,” he adds, presumably still talking about the monkey.

Probably for one or all of those reasons, a Bay City ordinance bans the keeping of any animal within city limits except “dogs, cats, or other animals which are commonly housed inside a dwelling as a pet.” The city has thus left some room for community standards when determining what animals may be owned, which is interesting. If nobody has a monkey, it’s illegal to own a monkey; but if a bunch of people ran out and got monkeys one day, it’d be legal by the time they got home.

Right now, though, it’s illegal, which we know because Stevenson was in the news last year for a failed attempt to get the Bay City Commission to rule otherwise. She now lives in the town of Wolverine Lake, which has a more liberal policy when it comes to “exotic animals,” so maybe she got a permit there. Or maybe not, because the report says she registered Apollo as an “emotional service animal” (meaning “emotional-support animal,” see below), which is why she thought it would be okay to bring him into the courthouse. But that would not necessarily have made it okay, even if true.

Second: as a couple of readers pointed out, the term “service animal” should be used carefully. Some laws only guarantee the right to a “service animal” and define that term to mean only animals that actually perform some task for a person. Of course, the most common service animal is a seeing-eye dog (although who came up with that term? It’s not like eyes do anything else), but other animals might qualify. And there are, in fact, monkeys that are trained to do things like fetch items for people who are confined to a wheelchair, although it doesn’t sound like Apollo was one of those. In the context of laws like those, the term “emotional-service animal” doesn’t make any sense.

Third: the concept of an emotional-support animal is still legit, however, under broader laws that entitle disabled people to “reasonable accommodations” for their disability. So, for example, a landlord who has a “no pets” rule would likely have to make an exception for a blind tenant’s service dog (because it’s clearly a “service animal”), but might also have to make a similar exception for someone who suffers from major depression. Depression is a disability. Having an animal around can really help with depression, especially for someone who’d otherwise have to live alone. So, depending on the facts, that might also be a reasonable accommodation that a landlord (or employer, or city) would have to make, even if the dog (or whatever) wouldn’t qualify as a “service animal.”

Fourth: yes, people abuse this all the time. If you aren’t disabled but try to make this argument just so you can have a pet, I hate you. If a dog or cat would be a reasonable accommodation but you insist that only some exotic creature will do, you’re not being reasonable. If having one at home would be reasonable but you insist on being allowed to take your pig or goat or tiny horse on a plane, or whatever, stop it. These all contribute to the perception that an emotional-support-animal claim is BS, which ruins it for those who are actually disabled and really need it.

Now, it may well be that Stevenson is disabled. The report doesn’t say. One of the problems with the emotional-support-animal concept is that you can’t see depression, so the need for the animal is not necessarily obvious to other people. And while it’s debatable whether a monkey would be a good choice for this purpose (see “throws feces,” supra), I wouldn’t rule it out entirely. None of this would mean, though, that she’d have a right to take a squirrel monkey into a courthouse.

Much less to jam him into a purse and let him be irradiated. I mean, come on.

Ninth Circuit: Monkeys Have Standing to Sue in Federal Court

Fly With Your Pants Down, Lose Your License, Judge Rules