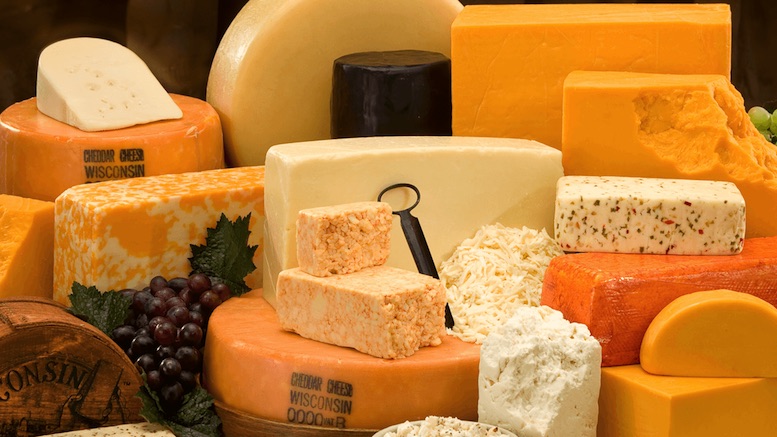 This'll all be official shortly (image: Wisconsin Milk Marketing Board)

Again at the request of children, a state legislature is preparing to enshrine something as an official state thing. In this case, the players involved are the fourth-graders of Mineral Point Elementary School, in Mineral Point, Wisconsin; the Wisconsin Legislature; and cheese.

The Associated Press, which was somehow unable to avoid headlining the story “Too Gouda to Be True!” and then, incredibly, repeated that phrase in the story’s first line (“It’s a bill too gouda not to pass”), reports today that the state senate is likely to approve Assembly Bill 73 this afternoon. The bill passed the Assembly unanimously on April 4, so if the Senate endorses it too, this will happen:

This is by no means Wisconsin’s first foray into this area. For one thing, it already has a state dairy product—milk—although that is technically designated the official state drink. You will also surely recall that in 2009, the Assembly proposed granting official status to Lactococcus lactis, which turns milk into cheese. See “Bill Would Designate Bacterium as Wisconsin’s Official Microbe” (Dec. 17, 2009). But it was divided on that one (56-41 in favor), and grumpy microbe-hating senators later refused to concur on the measure.

The critical difference here, most likely, is the involvement of children. And not just any children, but the formidable and frighteningly well-organized fourth graders of Mineral Point, who not only suggested cheese but also researched the matter and created a proposal complete with slides that are, without question, better than 90% of the slides that adults are out there torturing each other with as we speak. 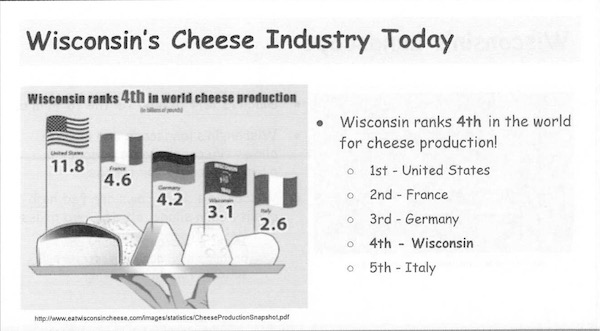 Should they technically have excluded Wisconsin from the U.S. figure for this chart? Maybe.

The proposal is linked as the “legislative materials” for AB 73, and includes not only the slides but also what appears to be the script that the children used when they presented this to one or more legislators who visited their school. (“Mason: ‘How many of you in this room enjoy eating cheese?!?! (pause) That’s a lot of hands!”) Given rhetorical tactics like that one, plus historical context and an impressive array of statistics, clearly the legislators had little chance of resisting the onslaught.

Not that it’s the worst thing about the AP’s headline, but neither gouda nor any of the myriad cheeses of the world will be more official than any other, as far as Wisconsin is concerned. (No, not even cheddar!) If the vote goes as expected, by the end of the day, cheese—all cheese—will be Wisconsin’s official state dairy product.

Can the children of Mineral Point then turn their attention to something like health care or maybe the trouble with North Korea? Maybe then something will finally get done.

Update (May 3): According to the legislature’s website, the Senate did indeed concur in the Assembly bill, which means that—unless the Governor wants to make a bunch of fourth-graders cry—Wisconsin will soon have a(nother) state dairy product.

There She Blows! ‘Tis the Contract for Moby Dick!