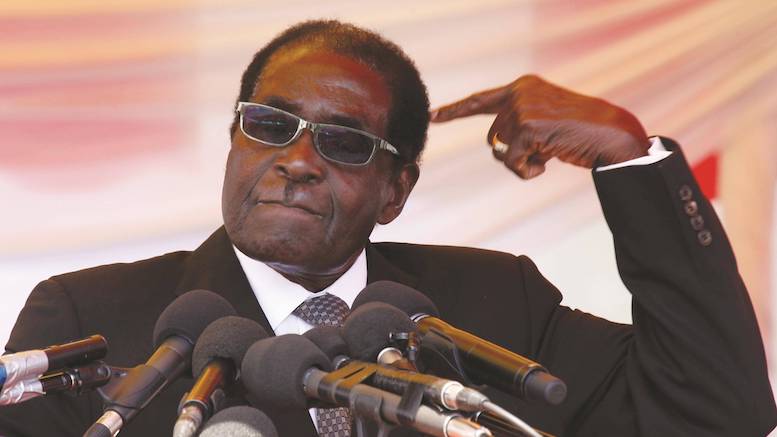 What has one finger and is President for Life?

Until recently, the most hilariously fraudulent dictatorial regime was, at least in my opinion, that of Zimbabwe’s President Robert Mugabe. Mugabe became Prime Minister in 1980, President in 1987, and is still in charge today at the age of 93. While there is nothing at all funny about much of what the regime has done, of course, there is still humor to be found in some of its ridiculous policies and especially its remarkably outrageous lies.

Zimbabwe’s longest-running joke was, of course, its currency. The Zimbabwean dollar was worth $1.47 in U.S. dollars when it was introduced in 1980, and maybe for about the next five minutes. Before too long Zimbabwe had not just inflation, but “hyperinflation,” and it continued to get hyperworse. The rate of inflation in 2008 was, and I’m not kidding, over 231 million percent. Eventually, they just gave up and started using other countries’ money. See “ALERT: Saturday Is the Last Day to Cash in Your $100-Trillion Bills” (Apr. 28, 2016).

There was also, of course, electoral fraud. In 2012, the opposition expressed concern that the list of registered voters seemed to have some issues, among them that the list had 116,000 people on it who were allegedly over 100 years old. Does that prove voter fraud? No, but since that’s about 115,000 more than there should be in a country where the average life expectancy is 51, it seems like decent circumstantial evidence. When the opposition asked for a copy of the updated list after the election in 2013, the regime said it couldn’t find it. Couldn’t find the list of registered voters, which had been kept in over 1,100 binders weighing over two tons. Funny, it was right here a second ago.

And it seems that as Mugabe ages, he and his spokesmen get more and more out there. In 2015, Mugabe tripped and fell as he was coming down some stairs at the airport. Or, at least, some claimed he “fell,” but according to the regime, that was fake news. He merely tripped, and even then it was under the most difficult conceivable circumstances:

Nobody has shown any evidence of the President having fallen down because that did not happen [a spokesman said]. The hump on which the President tripped was formed by two pieces of the carpet which apparently had not been laid out properly where they joined. And to be honest with you, even Jesus, let alone you, would have also tripped in that kind of situation.

Even Jesus would have tripped! Spicer and Huckabee notwithstanding, this may still be my all-time favorite spokesperson quote.

There was another good one a few days ago, though, which is what prompted all this. On May 11, the BBC reported that Mugabe’s spokesman had denied reports that the 93-year-old president has been repeatedly falling asleep in meetings. The usual miscreants have suggested this shows he is too old to perform his presidential duties, much less to run again for president next year as he has said he will. But again, this is fake news. The president, seen here not sleeping at a meeting of the World Economic Forum earlier this month, was simply resting his eyes. 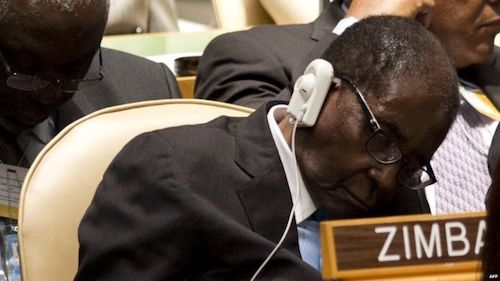 Also his neck and back muscles

“I feel like a failure when there is this reading that the President is sleeping in conferences,” said his current spokesman, George Charamba. “No! It has to do with his eyes…. At 93, there is something that happens to the eyes and the President cannot suffer bright lights…. [H]e looks down, avoids direct lighting.” Charamba couldn’t claim this also happened to Jesus, of course, because He was a much younger man. But he did his best. “In the case of [Nelson] Mandela, if you remember, you were not allowed to even use flashes whenever he was in the room…. [A]nd Mandela, I do not think lived as long as the President did.”

First, that’s wrong—Mandela was 95 when he died. Second, did you notice he used the past tense there when referring to Mugabe, too? Say, when was the last time Mugabe opened his eyes? That might be the more relevant question.

Or not. “One day when God decides that Mugabe dies, we will have his corpse appear as a candidate,” another spokesperson—his wife—said in February. Was she joking? Hard to say. “You will see people voting for Mugabe as a corpse,” she continued. “I am seriously telling you—just to show how people love their president.” Well, there does seem to be a hard core of support in the 20-25% range no matter what a president does, or doesn’t do, but I still think they may just argue Mugabe is resting his eyes forever.

NZ Prime Minister Gets Thrown Out of Parliament

O.J. Simpson Actually Not Guilty of Something