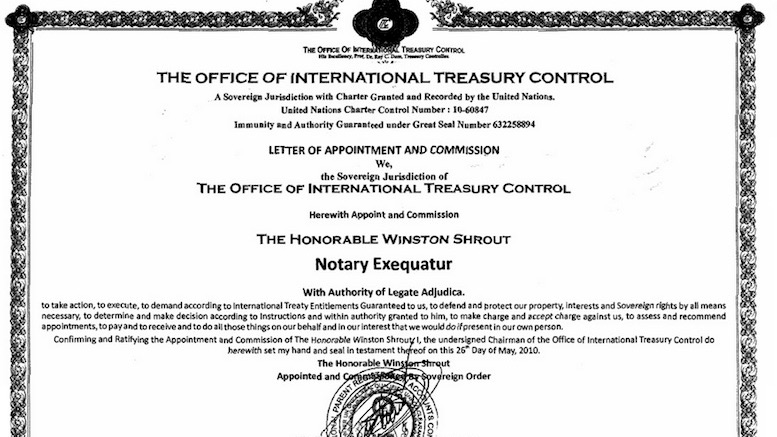 Yeah, none of this is even remotely true

He didn’t have the burden of proof, of course, so it’d be more accurate to say the government convinced the jury he was guilty of all 19 charges. But I wanted to emphasize the fact that, yet again, a sovereign citizen’s tax-avoidance arguments have been found thoroughly non-persuasive.

Winston Shrout, described in this report as a “prominent sovereign citizen,” hasn’t paid taxes in nearly 20 years and, even more impressively, has been charging people even dumber than him for seminars supposedly explaining how they, too, can not pay taxes. Of course, any idiot can not pay taxes, but it takes a special kind of idiot to believe they can avoid it legally for reasons like these. What’s that? No one has to pay taxes because Ohio wasn’t a state in 1911? And the history books have been wrong all this time? Gadzooks, this new learning changes everything!

“Commercial karma” is also not a thing

Or, it doesn’t. At least, it didn’t change anything for Winston Shrout, who was convicted on April 20 of six counts of failure to pay taxes (probably the statute of limitations had expired on the rest). The jury also convicted him of 13 counts of issuing fake financial documents, and since he had been indicted on 19 counts, that’s a conviction rate of 100 percent.

The fake financial documents were an especially clever part of the scheme. As Shrout told the jury, having perhaps unwisely decided to testify, he believed he was acting pursuant to authority conferred upon him by Dr. Ray C. Dam of the Office of International Treasury Control by means of the “Notary Exequatur” document pictured up above. What is the Office of International Treasury Control? Well, according to it, it was created in 1995 after the Nations of the World decided they were disappointed with how the Trilateral Trillenium Tripartite Gold Commission had been managing the world’s Combined International Collateral Accounts, and decided to appoint one person to handle that job. That person: Dr. Ray C. Dam. This was later confirmed by the United Nations, and ever since, Dr. Ray C. Dam has been singlehandedly doing what the entire TTTGC once did.

If you ask Wikipedia, though, it will tell you that OITC is a “seemingly elaborate fraudulent organization” that isn’t affiliated with the UN or any other legitimate group. (The UN will tell you the same thing.) While OITC claims to be a very well-connected and financially sound entity, the Wikipedia article appropriately points out that its website does not explain “why such an apparently wealthy organization would have such a badly designed website with many typographical errors.” And not just typos, I would add, but what can only be an intentional and flagrant disregard for the capitalization rules of civilized society.

So that’s a crock. And, of course, it has no authority that it could have conferred on Winston Shrout to do anything except maybe fix the problems with its website, which obviously neither he nor anyone else ever did. But Shrout did put its name on the bogus financial documents he was printing from his computer at home. What else did he put on those documents? Well, the words “one trillion,” among others:

Government lawyers argued Shrout aimed to cheat the Treasury and banks, and preached his illegal schemes to hundreds of others in paid seminars. He purposely sent a package of 1,000 homemade International Bills of Exchange, each purporting to be a legal tender for a trillion dollars, to a small community bank in Chicago “hoping to slip one by an unsuspecting banker,” U.S. Tax Division trial lawyer Scott Wexler told jurors.

Shrout’s defense appears to have been that he was crazy, or at least crazy enough that the jurors could find he had not acted “willfully”:

[Shrout’s lawyer] called each of Shrout’s fake bills of exchange “ludicrous on its face.” While prosecutors described the blue decorative borders, account numbers, red thumbprints and Shrout’s signature on the documents as “hallmarks of legitimacy,” Iniguez said they failed to point out the words, “Void where prohibited by law,” which clearly made the documents worthless.

Using a Monopoly analogy, Iniguez argued that if someone hands a player game money worth a trillion dollars but it says “void” on its face, “is that person really trying to defraud you?”

Well, he wasn’t doing this for fun. So, yes. In a civil case you could try to argue the plaintiff’s reliance wasn’t “reasonable,” but the only issue here, I take it, was whether Shrout acted “willfully.” And if you try to give somebody Monopoly money in exchange for something (other than Park Place etc.), thinking maybe it will fool them, and to your great surprise it actually does, in a criminal case you won’t get far blaming the victim.

And, using another Monopoly analogy, the jury decided Shrout should go directly to jail. Although “directly” in this case means sometime after August 1, the date of the sentencing hearing. Do not pass Go, do not collect any more money for seminars.