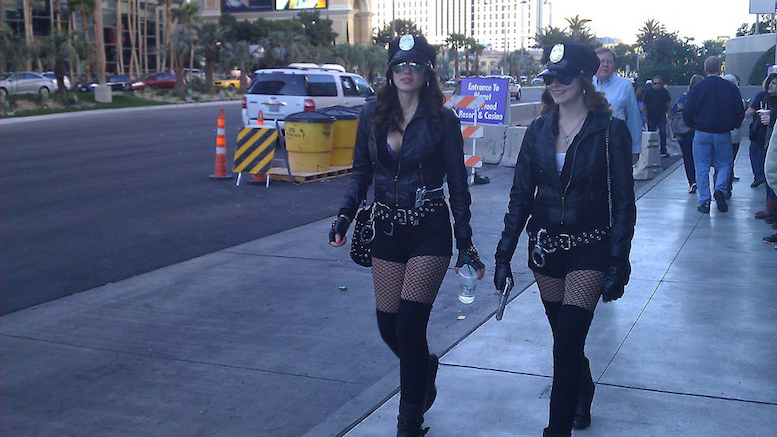 Sexy cops have rights too (image: Shorr26 via flickr)

As far as I can tell, the Ninth Circuit’s decision last week in Santopietro v. Howell has been largely overlooked, even though it involves something that has never happened before in the history of the United States: the use of the phrase “sexy cop” in a judicial opinion.

The case also confirms that sexy cops have First Amendment rights, not that those rights have really been under siege lately.

In 2011, Michele Santopietro and Lea Patrick traveled to Las Vegas, where they intended to act as street performers on the Strip. Specifically, they planned to dress up as sexy cops and pose for pictures with tourists in exchange for tips, the sort of thing that is also common in Hollywood, for example. See, e.g., “Nobody Tells This Wookiee What to Do,” Lowering the Bar (Feb. 6, 2007). In Vegas (and probably also in Hollywood) the authorities take the position that actually selling this service would require a license to do business in the county, but you don’t need a license if working only for voluntary donations (i.e., tips). I don’t know what it takes to get a sexy-cop license, but neither of these sexy cops had one, and they were arrested by undercover officers (sexiness unknown) who claimed they were actually demanding money. According to the district court, this is what happened:

Howell [an undercover officer working the sexy-cop beat] asked Santopietro and Patrick how much it cost to have a photo taken, and Santopietro replied that the picture was free, and that they posed for tips…. Howell posed for a picture with Santopietro and Patrick and then began to walk away without offering payment. Patrick stated “don’t forget the tip,” and Howell responded that he would not tip them. Patrick then stated “you said you would tip.” Patrick said that if Howell was unhappy with the photograph that Crawford, who had taken the photograph, should delete it. After this statement, Crawford approached Santopietro and asked what she was going to do if Crawford did not delete the picture. Santopietro said that she was not going to do anything. Patrick told Howell that Howell had entered into a verbal contract with her to give a tip.

Howell then arrested both sexy cops for doing business without a license.

The charges against Santopietro were later dropped, however, most likely because she didn’t demand money—only Patrick did that (assuming you think the above was a “demand”). Santopietro then sued, saying her arrest violated the First and Fourth Amendments.

The district court held that the officers had probable cause to arrest both sexy cops, even though only Patrick “demanded” money. Because she “asked for a tip three times in an increasingly aggressive manner and demanded that the officer delete the picture if no tip was given,” the court decided, the officers had probable cause to conclude “that Patrick, and by association, Santopietro” had crossed the line. (Emphasis added). If there was probable cause, then there was no Fourth Amendment violation—and, it apparently reasoned, no First Amendment violation. Case dismissed.

Santopietro appealed, but only on First Amendment grounds. That is, she apparently argued that even if the Fourth Amendment would otherwise have permitted the arrest, this case was different because she was a sexy cop—or, less specifically, that she had been “engaged in fully First Amendment-protected street performance” at the time of the arrest. The Ninth Circuit agreed.

It pointed out that although street performances are subject to reasonable time, place, and manner restrictions, it has repeatedly struck down laws that require “individuals or small groups” to get a permit or give notice in advance of “non-commercial expressive activity” in a public forum. That may be justified for a large protest, for example, but not otherwise. Asking for tips is also constitutionally protected speech, the panel noted. Therefore, if this was all Santopietro had been doing, it stated, the ordinance involved would clearly be “invalid as applied to Santopietro’s performance as a ‘sexy cop.'”

In analyzing that question, the Ninth Circuit assumed Santopietro’s version of the facts was true (because the district court granted summary judgment against her). In that version, she didn’t do anything wrong—it was the other sexy cop who demanded money. In fact, the district court specifically said that Santopietro was involved “by association” with Patrick. But the First Amendment protects freedom of association, too, of course, and so that alone could not justify charging them both for something only one actually did:

[The officers] had no evidence before them … that suggested that the “sexy cops” association had any purpose that could have fallen outside the protection of the First Amendment…. Nor was there evidence of Santopietro’s intent to engage with Patrick in anything other than clearly constitutionally protected expressive activity…. Both “sexy cop” performers were engaging largely, if not entirely, in activity that was not only legitimate but also constitutionally protected.

The [o]fficers do not maintain that, prior to initiating interaction with the women, they had formed any individualized suspicion that either “sexy cop,” whether alone or in association with the other, was engaged in unlawful activity.

(Emphasis original.) The court therefore held that based on this record, Santopietro’s claim should not have been dismissed. That doesn’t mean she’ll win, necessarily, just that she gets the chance to present her case to a jury.

All very interesting, of course, but let’s get back to my original point: according to my research, this case is the first one, ever, in which any court in the United States of America has used the phrase “sexy cop” in a written judicial opinion. Technically, the district court was the first one to use it—though only once. As the quotes above show, the Ninth Circuit—or somebody’s clerk on the Ninth Circuit, more likely—was downright enthusiastic about it, using the term no fewer than 13 times (not counting the headnotes), whether it was really necessary or not. So this is the opinion that future generations will likely remember as the sexy-cop opinion, even though it was technically not the first. After 227 years without a single known use of “sexy cop,” one case has now given us 14. Here’s to you, currently unknown clerk. You just made history.

You also helped protect an important constitutional right, of course, and that’s neat too.