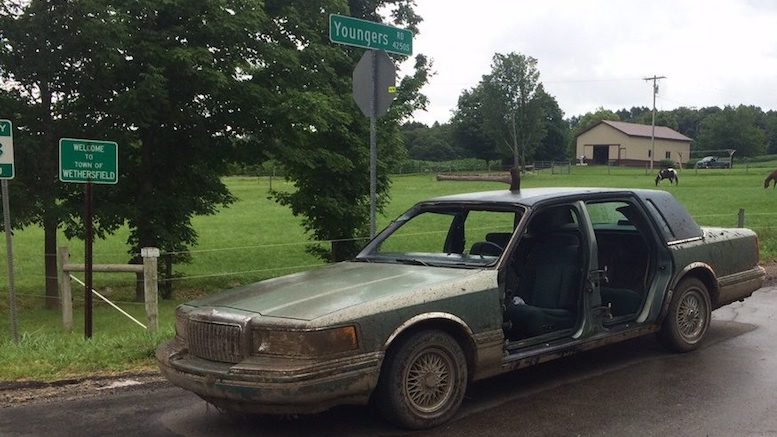 "Do you know why I stopped you?"

It is, however, not a great idea.

According to numerous sources, deputies in Wethersfield, New York, detained a gentleman on July 24 who had been driving the vehicle pictured above. I like this local source, for a number of reasons. One of those reasons is that it is a great example of what they call “burying the lede.” The headline is “Java man arrested after allegedly driving a vehicle with no doors or front windshield.” And then, three paragraphs in, it says this:

Deputies say they saw Price driving the vehicle which, in addition to having no license plates, had no windshield and no doors. Additionally, officials say an axe was stuck on the roof of the car.

How did that not make it into the headline? (Note: I also like the reference to him as “Java man”—he’s from Java, New York, but it’d be fairly appropriate if the driver had been an early hominid of some kind.)

The reporter may have felt this was not a significant detail, given that Mr. Price was apparently not charged with any crimes related to said axe. The list of charges was as follows:

Learning the vehicle had not been inspected is really not a surprise, since even the most cursory inspection tends to uncover things like missing doors, missing windshields, and double-headed axes embedded in the vehicle’s roof. That last one’s probably not on the list, exactly, but I think any trained mechanic would probably point it out. It is not, however, illegal to have it there, which explains why there is no corresponding charge.

Do I have time today to research what equipment is required on vehicles in New York? No, I absolutely do not. Did I do it anyway? Yes, of course I did. See N.Y. Veh. & Traffic Code § 375. Vehicles do have to be equipped with a front windshield. They do not have to be equipped with doors, but if they do have doors, and those doors have windows, the windows must be made of safety glass. I really don’t see how the “no safety glass” charge will stick here, though, since there are no windows at all. Well, there may be a back window, and if the car is old enough it might not be made of safety glass. But I’m more inclined to think some officer chose to interpret “no safety glass” literally.

Which kind of seems like piling on in this case.

Nothing about the axe, though, and why should there be? Assuming it’s his car, he has every right to take an axe to it if he wants to, just like this guy had the right to put a couple of bullets through his car’s dashboard after it refused to start. (Well, the authorities didn’t agree with that, but I am on record as saying he did.) I suppose the axe could have been a potential problem if this guy had been in an accident, but that depends how firmly it was stuck in there. Anyway, I find nothing in the statutes saying that you can’t drive around with an axe or similar item embedded in the roof of your vehicle. We don’t have many rights left, but that should be one.

Speaking of rights, there is no question the stop in this case complied with the Fourth Amendment, because the police had gotten a tip about someone driving around with no license plates. They could have stopped him for that or for the missing windshield, of course, had they just spotted him on the street. So there is no need here to get into the question whether a stop based solely on the fact that you are driving a doorless car with an axe in the roof would be constitutional. But since you ask, I would say no, because there has to be at least a reasonable articulable suspicion of criminal activity, and those aren’t crimes.

Of course, it all depends on the circumstances, which is why I also agree with the result in People v. Foranyic, which held it was reasonable for police to stop somebody who they saw riding a bike around at three a.m. carrying an axe. But the axe wasn’t the justification here, so unfortunately we won’t be getting another opinion like that one anytime soon.

I know a lot of you are taking the bar exam this week, so if this hypothetical is on the test and this post helps you with it, that will be $500.

REPORT: Government Covering Up Truth About 9/11, According to Charlie Sheen

How to Avoid Jury Duty, #8: Be Pals With a Serial Killer

Lawsuit Seeks $1 Million for Those Who Bought Full-Price iPhone