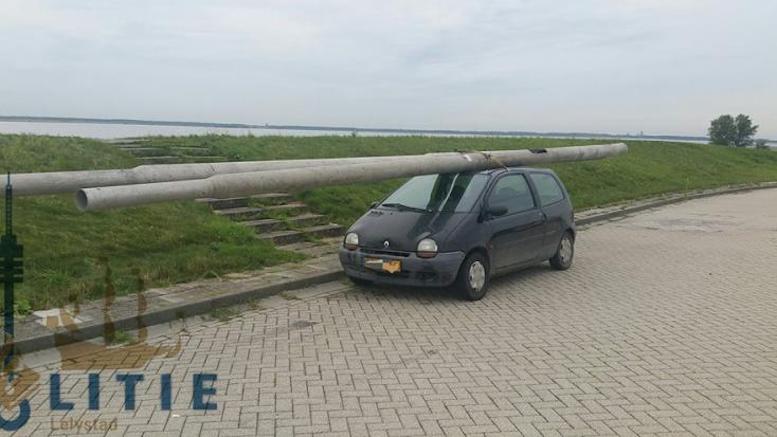 Is there a problem, officer? (image: Politie Lelystad)

In many cases of Driving Something Unusual While Intoxicated, the legal issue is whether the thing driven is a “vehicle” or “motor vehicle” under state law. Sometimes it’s a thing that’s usually not motorized (picnic tables, beer coolers, bar stools), sometimes it’s usually not operated on a street (Zambonis, inner tubes), and sometimes it’s a horse. That’s not the issue here, though, because the machine pictured above is, apparently, a real motorized vehicle designed for use by adult human beings on actual public streets. That is, it’s “unusual” only because of what’s attached to it. But that does make it unusual, and the driver was intoxicated, so I decree it to be within the bounds of DSUWI.

As you may have noticed, the picture shows two large metal shafts, said to be lampposts, strapped to the roof of what experts believe is a Renault Twingo. Specifically, it appears to be a Twingo I, made in France at some point between 1993 and 2007. According to Wikipedia, the Twingo I originally had a one-liter engine (!) that could generate up to 60 horsepower, although later models were souped-up to a full 75. It had a wheelbase of 2,345 millimeters, was just 1,420 mm high, and looks like it could be crushed by a small suitcase. And yet someone in Lelystad, the Netherlands, tried to use one as shown above.

“What exactly the man was planning to do with the lampposts is unclear,” according to the report, and indeed, much remains unclear about the incident last Tuesday. Police believe the lampposts were stolen from the nearby town of Almere. The man must have had help stealing and mounting the things, but no one was with him in the car. And this may shock you, but he had been drinking. Or, at least, police claimed they smelled alcohol and the man refused to take a breath test.

I was also curious as to why the man may have believed no one would notice him, since I doubted that somebody drunk enough to believe that was possible would even be able to drive. As I’m sure you know, the quickest way between Almere and Lelystad is to take the A6. That’s usually about a 30-minute drive. But even in the middle of the night, when I assume this happened, there might be significant traffic on that road. This report says he was stopped on the A6, but others say it was on the Oostvaardersdijk: 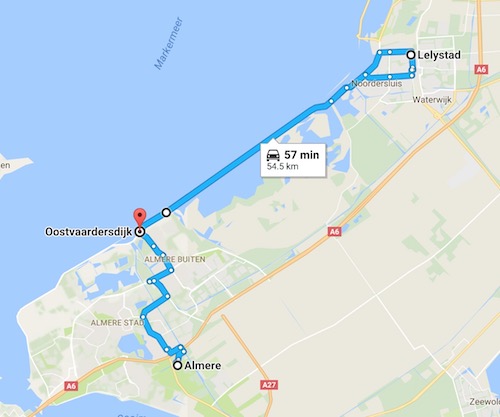 That trip would take twice as long, but maybe there’s less traffic?

Based on this more recent report, though, it may be that our hero did try to take the A6 but his car broke down. Because according to the report, somebody came along and helpfully gave him a tow. 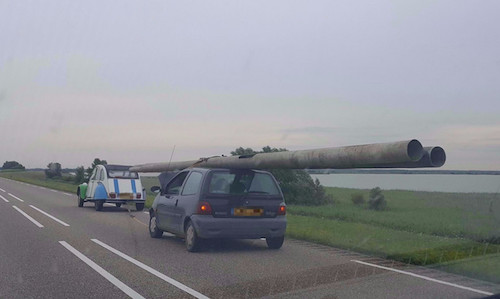 Here’s what the report says about it, as Google translated it from the original Dutch:

This man [the good Samaritan] had nothing to do with the lantern transport. “He saw that the Twingo was in a dangerous place on the A6 with his special cargo and took him towed and left behind in a parking lot at the Oostvaardersdijk. There the agents saw the car with the masts on the roof,” said a spokesman for the police [of] Flevoland ….

Again, questions remain. The most obvious being: What are the odds this guy would be rescued by someone in a car even more embarrassing than his own?

The report says that’s a “Citroën 2 Chevaux,” and if this is correct then that car is not less than 27 years old and has an engine that delivers, at most, 29 horsepower. Less than half the power of a Twingo! How does a car like that tow anything, much less a fully loaded lantern transport? And regardless of the horsepower, how could towing have been safer than leaving it or just pushing it off the road? Hope the guy doesn’t pass out while you’re towing him, because good luck coming to a stop without getting your clown car impaled by a lamppost.

The more recent report did provide a little more detail on the charges against the lamppost-stealer. Not only was he allegedly intoxicated and in possession of stolen property, he didn’t have insurance, his license was expired, and of course, “cargo may not be transported in this way.” More charges may be pending. (Possibly my favorite Google translation here: the suspect “is still enclosed for research.”)

Still nothing on the details of the theft, or what his motive might have been. Though we do get this (again via Google Translate):

The Twingo driver is a 28-year-old resident of Almere. Where the man has the lampposts is not known yet. No reports have been reported. He came from Lelystad. “We have not seen this before. You also wonder what to do with such a booty. Sell ​​like old iron?”

I think that means the plan was probably to cut up the poles and sell them for scrap, although it would’ve been a lot easier to cut them up before moving them. That might have attracted attention, though.

The case immediately made me think of the Great Totem Pole Caper of 2011, although that guy at least had the sense to use a truck to move his booty.

More on the Risk of Death by Turtle