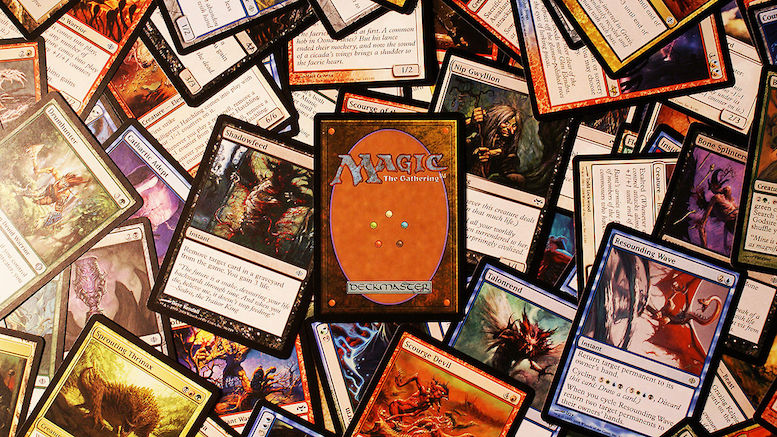 Magic: the Gathering cards (all © Wizards of the Coast and Hasbro, Inc.)

I’d like to ask that in the future, reporters covering a story like this one—and by that I mean any story in which one player of a ridiculous board or card game has tried to murder another one—please investigate fully enough to determine what exactly triggered the dispute.

On second thought, don’t do that. That would prevent me from speculating that the cause was something truly nonsensical, when it’s usually something pretty mundane. Forget what I said before.

This has been a dilemma of mine for a while now. For example, I desperately wanted to know exactly how it came to be that, as the Tampa Tribune reported in 2007, somebody got stabbed while he was playing Yahtzee. Was it an argument over the well-known discrepancy between the 1956 and 1961 rules as to whether a Yahtzee could be deployed as a “joker” in the upper section of the scorecard? Probably not, but if the report had given the actual reason, I would not have come up with that joke, which I like enough that I’ve probably used it four or five times now. See, e.g., GRTK #2 (Again): Yahtzee Dispute” (Sept. 29, 2011). So it’s good that I didn’t know. At least if you like that joke.

Similarly, in “GRTK #6: Messed With Your Dungeons & Dragons Character” (Aug. 28, 2009), the report did say that the suspect went after the Dungeon Master with a hammer because he “didn’t like what [the DM] was doing to [his] character.” I would very much like to know just how that character died, but again, it’s probably better to be able to speculate that a level 60 paladin lost his last hit point because a kobold bit him in the ankle, or something. See alsoGRTK #17 & 17.1 (beer pong); #19 (Monopoly); #34 (chess); cf. #57 (excluded from Monopoly tournament for “unsportsmanlike conduct” the previous year). So, yeah, don’t look into it too closely, I guess.

I’m a little handicapped when it comes to this particular story, because I’ve actually never played Magic: the Gathering. (These guys have.) I do of course know that it is a trading-card game with a D&D-type theme in which two or more players engage in a battle acting as powerful wizards, although not so powerful that they can avoid giving up their lunch money to ogres they encounter from time to time. Like many games, it has complicated rules, winners, and losers, and this can easily cause volatile situations in which one player may snap and whack another with a rubber mallet before stabbing him several times in the neck.

The alleged assailant, or the game’s equivalent of a hobbit—my notes aren’t clear

It happened in Minnesota, at least, on the night of July 27/28. According to the St. Cloud Times, 31-year-old Elija Dale Creech called 911 to report that he had stabbed a guy. Officers found a 20-year-old man at the scene with knife wounds to the face and neck. “Investigators were told that Creech and the victim had argued over playing a card game called ‘Magic the Gathering,’ and that the argument led to Creech hitting the man in the face with a rubber mallet and stabbing him seven times.” Happily, the victim’s wounds were not life-threatening.

Again, I have mixed emotions about the phrase “argued over playing a card game called ‘Magic the Gathering.'” On the one hand, I want somebody to go ask the victim exactly what triggered the violence. Was it simple frustration over a loss? Or was it a rule dispute? The full set of rules, at least, is ridiculously complicated—like, Code of Federal Regulations complicated. Any set of rules like that is going to cause arguments, and sooner or later somebody’s going to get malleted. But on the other hand, maybe they were arguing about something completely unrelated, and that’s no fun. So on balance, I guess I don’t want these questions asked.

I would prefer to think, for example, that something like this happened:

Svogthos, the Restless Tomb, is on the battlefield. An effect that says “Until end of turn, target land becomes a 3/3 creature that’s still a land” is applied to it (layers 4 and 7b). An effect that says “Target creature gets +1/+1 until end of turn” is applied to it (layer 7c), making it a 4/4 land creature. Then while you have ten creature cards in your graveyard, you activate Svogthos’s ability: “Until end of turn, Svogthos, the Restless Tomb becomes a black and green Plant Zombie creature with ‘This creature’s power and toughness are each equal to the number of creature cards in your graveyard.’ It’s still a land.” (layers 4, 5, and 7b). It becomes an 11/11 land creature. If a creature card enters or leaves your graveyard, Svogthos’s power and toughness will be modified accordingly. If the first effect is applied to it again, it will become a 4/4 land creature again.

Those are examples from the full set of game rules, giving you an idea of the kind of difficult questions that might arise. In a tournament situation, a judge could resolve the dispute, and security wizards would be standing by to cast the Calm Dweebs spell if things get out of hand. But if Svogthos, the Restless Tomb, shows up late one night and what was once a friendly game starts to deteriorate, well, you can see how it could get ugly.

Especially since Mr. Creech, it turns out, has a criminal record. According to the report, he was convicted in 2013 for “possession of an explosive with intent,” and it doesn’t say what his intent was but it probably wasn’t good. This history, plus what the report cryptically calls “information from the overnight investigation,” led to the summoning of a Hazmat Team (part of the fire department, not the game) and the obtaining of a search warrant. No hazardous materials were found, the report says, though I doubt they tested for Plague Spores.

For future reference, neither stabbing nor the use of a rubber mallet are expressly prohibited by MTG tournament rules, but would likely be found to violate Rule 5.4 (Unsporting Conduct), which precludes “acting belligerently toward” tournament officials, players, or spectators. Please conduct yourselves accordingly.

Court to DOJ: About That Meta-Data You Said You Didn’t Have … [Update II]

Strip Searches Lead to Discovery of Comical String Cite, Among Other Things