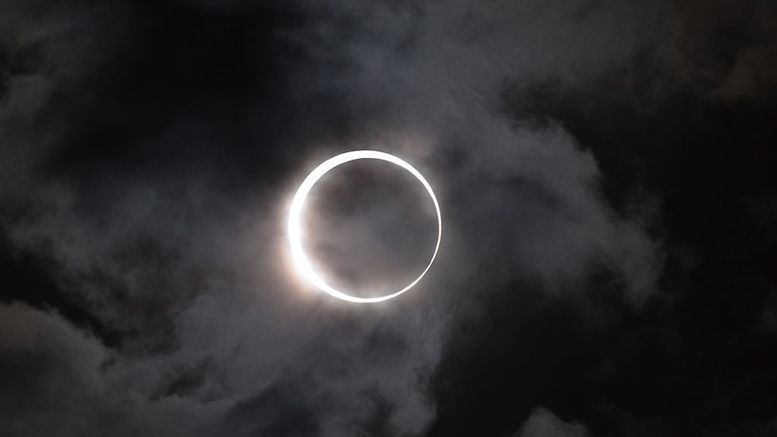 What he missed (image: Takeshi Kuboki via Wikipedia)

“Definitely recurrent, sometimes consequential, and occasionally spectacular, the solar eclipse understandably occupies a provocative and luminous place in history and in art,” is a sentence you really don’t need to finish to know that your motion to continue a hearing because of that eclipse is about to be denied. And so having read it, you can just relax and enjoy what follows, which in this case is in fact enjoyable.

Less so if you lost, of course, but still.

The Tampa Bay Times reports that last week, U.S. District Judge Steven Merryday, in the Middle District of Florida, denied a motion by an assistant U.S. attorney to delay a case for eclipse-related reasons. Specifically, she told the court, a key government witness would be unavailable that day because he had pre-paid for a ticket to visit an area in the path of totality (which, as you surely know by now, did not pass through the Middle District of Florida). Or, as the court put it: “Cruel fate has dictated that the August 21 eclipse will occur during the trial of an action in which the agent is a principal participant on behalf of the United States.”

That is another sentence from which one could safely conclude that one’s motion will not be granted.

And in fact, while as noted the judge agreed that an eclipse can be a spectacular event and sometimes one with historical significance—the first paragraph of the order mentions Herodotus, Prince Igor’s fight against the Polovtsians in 1185, an 1820 eclipse mentioned by Wordsworth, and (somewhat more recently) the song “You’re So Vain” (1972)—he said that these days it’s maybe not quite such a big deal, at least if you’re willing to travel outside the United States. But ultimately, the judge held, pre-paying for the eclipse ticket was basically a wager that the trial wouldn’t go forward as scheduled (because the eclipse certainly would). Unfortunately for the agent, he lost that bet.

All three pages are worth reading, so here they are.

Update: I knew the judge’s name sounded familiar. He has in fact appeared here twice before, and one of those also involved a remarkably great—but just as unsuccessful—argument for a continuance. See “Judge Won’t Continue Trial So Attorney Can Enter Hemingway Look-Alike Contest” (June 29, 2012); see also “How to Start a Brief” (Feb. 8, 2013) (noting that Judge Merryday had blasted a party for drafting an utterly horrible first paragraph, and rewrote it for them).

Airport Screeners Directed Not to Touch Your Monkey