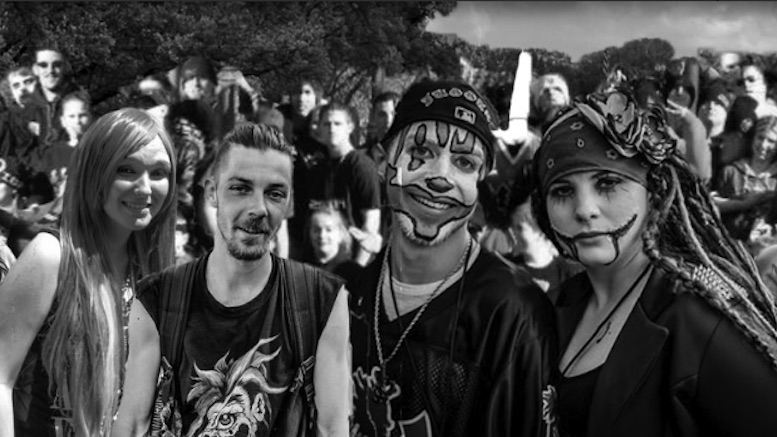 Some photoshopped Juggalos (from www.juggalomarch.com)

While people try to convince the President of the United States that Nazis and racists are, you know, bad, let’s not forget that the feds have been spread pretty thin trying to keep track of all the suspicious groups out there. Among them, of course, is that “loosely organized non-traditional hybrid gang subset” known to the federal government as the Juggalos.

As you may recall because I’ve mentioned it umpteen times, the DOJ used that memorable phrase to describe Juggalos—fans of the hip-hop duo Insane Clown Posse—in its 2011 National Gang Threat Assessment. ICP and certain Juggalos sued the DOJ and FBI in 2012, alleging that after the assessment was released, they were harassed by police, denied employment, and harmed in various other ways by the “gang” description. A federal district court dismissed for lack of standing, but in 2015, the Sixth Circuit reversed, saying they had alleged enough to go forward. But in September 2016, the district court dismissed again.

This time the court held the claim didn’t satisfy the Administrative Procedure Act, which governs legal actions that challenge federal agencies’ decisions. The decision has to be a “final agency action,” which in this case meant it had to (1) be final and (2) “cause legal consequences.” This one didn’t “cause legal consequences,” the court held, because everything the Juggalos alleged was done to them by some third party, not directly by the agencies themselves. They could have sued the FBI if they’d been arrested by FBI agents, apparently, but because the alleged hassling was done by state or local officials, the Juggalos were out of luck.

But that sounds an awful lot like the reason the court dismissed the first time, namely that the Juggalos hadn’t alleged Article III standing because their injuries resulted from “independent actions by third parties who are not currently before the court.” The Sixth Circuit disagreed with that, noting that “it is still possible to motivate harmful conduct without giving a direct order to engage in said conduct. The Juggalos allege that the injurious third-party actions were motivated by the DOJ gang designation,” and at least for Article III purposes, that was enough. On remand, though, the district court then held that even if it is enough for Article III, the very same causation argument isn’t enough for the APA. Okay, they can sue in federal court, he basically held, they just can’t win.

That isn’t necessarily wrong, because the Article III causation standard is pretty easy to satisfy, and so it’s possible to meet that standard but still come up short on the legal claim itself. But it’s interesting that the district court didn’t try to make this distinction—in fact, it didn’t mention the Sixth Circuit’s decision at all, instead relying on a Fourth Circuit case. In any event, the Juggalos have appealed again, so they haven’t given up on legal action.

They have decided to try something more direct, though—a march on Washington.

On September 16, 2017—just 33 days from now, as I write this, according to the Juggalo March on Washington Countdown Clock—a loosely organized non-traditional group of music fans will converge on the nation’s capital to protest the “gang” designation. They will meet at the Lincoln Memorial, hear some speeches, then march down to the Washington Monument and back. Will some or all of them detour north a bit to march around the White House? I sure hope so, but it’s not on the agenda at the moment.

Those not prepared to follow the Code should stay home

There will then be a free concert featuring (so far) 25 bands including not just ICP but also (among others) Big Hoodoo, Glasses Malone, Kung Fu Vampire, Zug Izland, and, for a reason that I’m sure will later be explained to the country’s full satisfaction, Vanilla Ice.