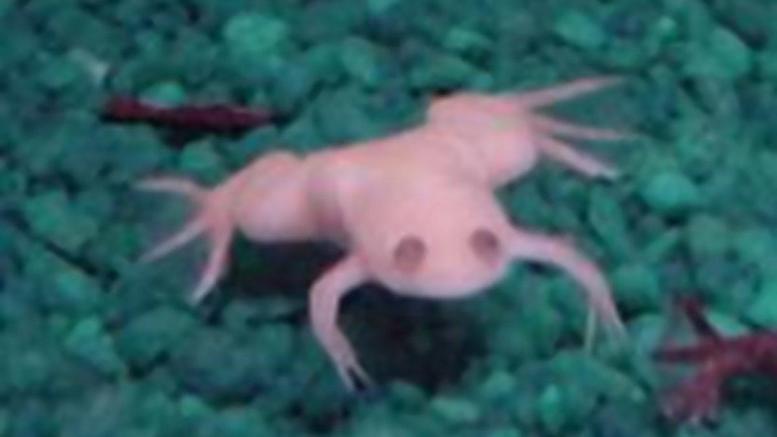 The frog was special, said New York lawyer Thomas Liotti, because a client gave it to him over 20 years ago, and it had the office mascot ever since. Owen the Frog—they named him after the client, apparently—was an African albino tree frog whose bowl had a place of honor in Liotti’s Long Island office. But Owen and the bowl both disappeared last week, allegedly stolen by a potential client during a visit. Now, barring a miracle, Owen is gone for good. 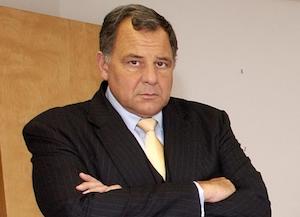 “Our entire office was devastated by the news,” said Liotti. “It was an inexplicable act of cruelty.”

It is inexplicable, but the mystery wasn’t unsolvable. According to the New York Daily News, surveillance footage showed—you know what, don’t read the Daily News piece, it has too many terrible frog jokes (“hopping mad”? really?). One would have been too many, frankly. Read Newsday instead.

So, according to Newsday, once Liotti’s staff realized Owen was missing, they checked surveillance video and saw the potential client, Fernando Castro, leaving with the bowl. Because he had been in the office for an appointment with Liotti, of course, they knew who he was, and it didn’t take long to track him down.

Castro reportedly admitted to police that he had stolen the frog, although it isn’t entirely clear why. (See “inexplicable act,” supra.) He said he wanted to meet with Liotti because he was considering switching attorneys. While he was waiting, he somehow came into unsupervised contact with Owen, and decided to steal him. According to Newsday, “[h]e took the frog to his car and returned to the office, where he met with Liotti.”

That detail aggravates the matter quite a bit, in my view. First, you don’t leave a frog in a hot car in August. You just don’t. Second, going back to meet with a man whose frog you have just frognapped, while that frog sits in a hot car in August, is clear proof of depraved-heart indifference, if you ask me. (See “inexplicable act of cruelty,” supra (emphasis added)).

Anyway, Castro said that after his meeting with Liotti, he took the bowl and frog to his other lawyer’s office and told the staff there that he wanted to give the frog to that lawyer as a “gift to replace a fish that had died,” the report says. By this time, the alarm had been raised back at Liotti’s office, and Castro had been identified on the security footage. Liotti tried to call Castro, but reached his girlfriend, to whom Castro had apparently divulged his plan. Liotti then called the other lawyer, only to learn that in the interim, the lawyer’s receptionist had taken Owen out to a nearby creek and released him.

So far as I can tell, Owen’s body has not yet been found, at least by the authorities. The first 24 hours is critical in any abduction case, and since Owen was an albino, it seems unlikely he could have avoided predators for that long. If he does manage to survive and somehow breed, or spawn, or whatever it is frogs do, there could be another problem, potentially a serious one.

Reports mostly describe Owen as an “African tree frog,” and if that’s true then things might be okay (well, not for him). But according to my research, African tree or dwarf frogs are often mistaken for African clawed frogs, and those are said to be “voracious predators” that can “easily become a harmful invasive species” if they escape captivity. In fact, it is illegal to own or sell African clawed frogs without a permit in about a dozen U.S. states (though not New York), for this very reason. If the frog depicted above is actually Owen—the Daily News is unclear on this, having wasted resources on terrible frog jokes—then things are probably fine (again, not for him) because that doesn’t look like an African clawed frog to me. Otherwise, well, who knows.

At the moment Castro is only charged with petit larceny (Liotti says Owen was valued at $900, though that seems a bit high for a 20-year-old frog with an unclear pedigree). But he should probably cross his fingers that Owen isn’t out there right now breeding up a tribe of clawed frogs, because that might be on him too.

Interestingly, in the 1990s Liotti was involved in a bizarre episode in which, for seven months, he received “an alarming series of anonymous faxes and letters, festooned with decals of American flags, grinning leprechauns and Tasmanian Devil cartoons,” and accusing him of various crimes and other misconduct. The state’s highest court later found that this campaign had been waged by a local judge with whom Liotti had been feuding. The New York Times described the case like this in 1996:

[J]ust about everyone who is familiar with this matter agrees: the enmity between Judge Mogil, 46, a lifetime member of the National Rifle Association (he carries a gun in court) and the founder of the Flying Judges Association (he is a lieutenant colonel in the Civil Air Patrol), and Mr. Liotti, 48, a part-time village justice and columnist known for his untrammeled praise of his own legal acumen, has spawned a case that resembles no other.

Liotti made some statements he probably shouldn’t have, and being known for your untrammeled praise of your own legal acumen generally doesn’t endear you to people either. But he wasn’t at fault in that case, the judge was. The former judge, I should say, because the Court of Appeals removed him from the bench, and he was later disbarred (in two states) as a result of the same incident.

It would be utter and complete speculation for me to suggest that this former judge had anything to do with Owen’s disappearance, so I’m not going to suggest that.

Feds Say They Have Accused Fraudster’s Ankle Bracelet in Custody

Q: Does a Criminal Defendant Forfeit His Right to Counsel by Punching Said Counsel in the Face?