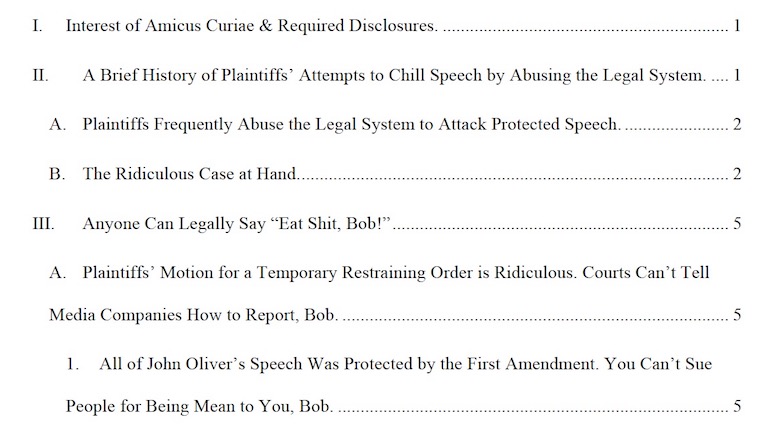 An excerpt from the table of contents

A category entitled “Asking for It” might be a good idea, or maybe a “Streisand Effect” sub-category of Free Speech. Those come to mind when thinking about Marshall County Coal Co., et al., but really just Robert E. Murray v. John Oliver, which coal executive Bob Murray filed after Oliver made fun of him on the June 18 episode of Last Week Tonight. Murray accused Oliver, his producers, and HBO of defamation, and even demanded a temporary restraining order preventing further dissemination of Oliver’s statements.

Is that going to work? Nope. Is it going to have the opposite effect? Yep.

On July 21, HBO (represented by Williams & Connelly) filed an excellent brief opposing the TRO request. Is it funny? Well, kind of, but there aren’t that many opportunities for intentional humor in legal briefing, I’m sorry to say. Amicus briefs are a different story, though, and the brief the ACLU filed this week in support of Oliver et al. is pretty great.

To be honest, any brief that includes a heading like, “Anyone Can Legally Say ‘Eat Shit, Bob!'” is going to get a good review from me. Doesn’t really matter what else it says. But it’s a great brief overall.

In case you didn’t watch the episode, and you may not have, even though I linked to it above and am embedding it here—

—I am of course forced to repeat some of Oliver’s allegedly offensive statements, just to provide necessary context for this report of a newsworthy item involving someone who is clearly a public figure, see New York Times Co. v. Sullivan, 376 U.S. 254 (1964).

In general, the episode was about the coal industry, the challenges it’s been facing, Donald Trump’s claims that he just loves coal miners, and some things that, according to Oliver, suggest that perhaps Trump and/or coal-company executives do not always make miners’ best interests a top priority. Murray was just one of the executives mentioned, but he ended up being featured, Oliver said, because a request for comment yielded only a threatening cease-and-desist letter. This meant the episode was even less flattering to Murray than it might have been.

For example, “Eat shit, Bob,” was not a phrase Oliver coined. According to him, it was a phrase one of Murray’s employees wrote on a $3 “bonus check” he sent back because he was insulted by it. Oliver also said that Murray continues to blame a deadly 2007 mine collapse on an “earthquake,” though a report by the federal Mine Safety and Health Administration found there was no evidence of that and blamed it instead on “unauthorized mining practices.”

Oliver also suggested that Murray “looks like a geriatric Dr. Evil,” and had a giant squirrel named “Mr. Nutterbutter” come on the show to insult him. (The episode explains that one.)

Oliver said he expected Bob to sue him, and he was proven right on June 30. The complaint accuses defendants of defamation, “false light” invasion of privacy, and intentional infliction of emotional distress. It alleges that the episode not only embarrassed Murray, it also affected his health and—not making this up—has even shortened his life expectancy. The complaint seeks damages, punitive damages, and a “permanent injunction prohibiting rebroadcast” of the statements.

I thought it was notable that the plaintiffs devote several pages of the complaint to arguing that the 2007 mine collapse was caused by an earthquake—although I noticed they do hedge that position a bit. For example, they allege that the mine collapse “was in fact triggered by what is commonly understood as an earthquake,” that what happened was “very similar to the [U.S.G.S.] definition of an ‘earthquake,'” and that the triggering event was “not consistent with normal mining-induced seismicity” (!) but rather was something that “many would characterize as an earthquake.” (Emphasis added.)

Arguably, these statements are not consistent with the O.E.D. definition of “confidence,” but it’s possible that some would characterize them as such.

The opposition and the amicus brief make many of the same arguments, as you’d expect, but in somewhat different terms. The proposed TRO would be a “prior restraint” on speech, the opposition shows, something the Supreme Court has never upheld and would be “blatantly unconstitutional” here. Plaintiffs have zero likelihood of prevailing anyway, because of the fair-reporting privilege, because satire and opinion (“looks like Dr. Evil”) aren’t actionable, and because truth is a defense. Indeed, Murray has a “demonstrated history of bringing meritless defamation lawsuits,” the opposition says, and this one is equally “ill-considered.”

This is more or less the same as “Anyone Can Legally Say ‘Eat Shit, Bob’!” They just didn’t feel comfortable putting that in a heading, I guess.

To be fair, HBO did use the heading “[The] Statement that Plaintiffs ‘Appear To Be on the Same Side as Black Lung’ Is Not Actionable,” which is also good.

Again, as an amicus, and as the ACLU, the ACLU was willing to go further, and it offered plenty of good quotes in its brief. “This case is about [Bob] Murray not liking a television program and somehow believing that is a legally actionable offense,” for example, is a pretty good summary. The lawsuit isn’t surprising, the ACLU says, because “[i]t appears that Bob Murray’s favorite hobby is suing and/or threatening to sue people for making political statements he disagrees with.” This statement is followed by seven citations with “Murray” in the title and some version of “dismissed” in the parenthetical.

It also mocks the allegation that Oliver “attacked [Bob] in a forum in which he had no opportunity to defend himself” and so the lawsuit is simply to “set the record straight.” I doubt he wanted to be on the show, and the ACLU notes that as far as the public forum is concerned, Murray sent out a press release the day the case was filed and then appeared on Fox News to insult Oliver on national TV. Those things don’t cost the defendants any money, of course, which might be another reason for the lawsuit.

Also mocked: the claim that John Oliver and the other defendants will use their “unique powers” to “access … millions of West Virginians” in order to “bias the potential jurors who will determine their fate” in the incredibly unlikely event the case gets anywhere near a courtroom. That is stupid, the ACLU points out, because again, Murray can say things in public too, and it also notes that the defendants’ “unique powers” “must include magic, as West Virginia has under 2 million residents.” (Although to be fair, Murray was talking about some unknown point in the future when the jury will be selected.)

“And with regard to the Dr. Evil remark,” the brief notes at page seven, “it should be remembered that truth is an absolute defense to a claim of defamation.” 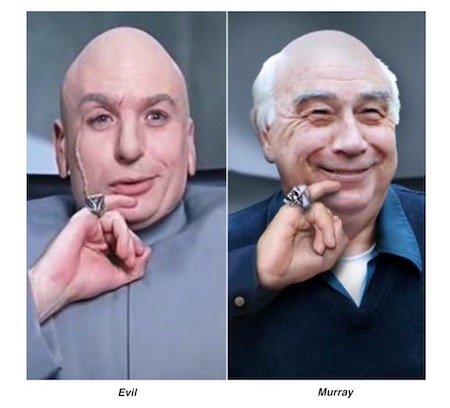 Image from the ACLU’s brief; captions added by LTB to assist readers

The case is “beyond meritless,” the ACLU charges (which is not technically possible, but that’s being picky). Or, put another way, “[i]t is apt that one of Plaintiffs’ objections … is about a human-sized squirrel named Mr. Nutterbutter, because this case is nuts.” Finally, it asks the court to sanction Murray et al. for filing yet another a bogus case.

“John Oliver was mean to you, Bob,” the brief concludes. “So what?” Also a pretty good summary of the case.

Ladies and Gentlemen, Rod Blagojevich Has Left the Building