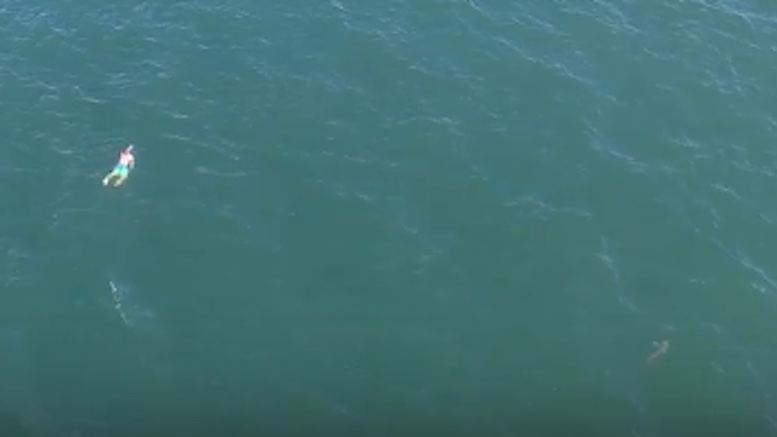 Take everything I’ve said before about trying to hide in or escape across bodies of water (see, e.g., “Pond Ruins Yet Another Getaway” (May 24, 2016), “Police Wait Patiently for Man in Pond to Surrender” (July 24, 2014); and “Sinking Pedal Boat Ends Ridiculous Escape Attempt” (Jan. 28, 2010)), multiply it by several orders of magnitude, and apply it to this case, in which the body of water was the Atlantic Ocean.

Surf City, North Carolina, is on the western shore of that ocean, about 20 miles northeast of Wilmington. According to the Port City Daily, police there made a traffic stop somewhere near the beach, and spotted “contraband” in the young man’s vehicle. They asked him to get out and began to interrogate him. But shortly thereafter, he decided it might be better to flee, so he turned and ran.

Fleeing like this is never a great idea for a variety of reasons, and if they’ve got your car and your license plate, etc., you probably won’t be that difficult to track down anyway. But people in these situations often aren’t thinking clearly. Which was probably the case here, or else he might have considered, let’s say, the likelihood that police officers in Surf City will be equipped with boats. But he didn’t consider that. He just started swimming.

Police may not have had a boat nearby, or more likely they assumed he would come back to shore pretty quickly once he realized the closest land mass in that general direction was Bermuda, about 750 miles away. But they did have a drone handy, so they sent it up to track the suspect—who, at this point, had been swimming for about an hour and was almost one-750th of the way to Bermuda. They found him pretty easily—as you can see in the short video below, he stood out clearly. They also noticed that someone else had found him. That guy’s harder to see, but focus on the bottom right:

You can just make out something that’s clearly not a wave. It is, in fact, a shark.

It may or may not be a very big shark. It’s hard to tell. Nor can you make out what kind of shark it is (or at least I can’t), and from this brief clip it doesn’t seem to be that interested in him. (The Port City Daily‘s headline, “Man flees by swimming a mile out to sea, pursued by shark,” may be a little exaggerated). On the other hand, maybe he’s just waiting for his friends to show up. You know how sharks are. The bottom line is, who knows what that shark had in mind, and our hero was almost a mile out to sea with nothing to protect him but shorts.

In any event, when police realized there was a shark-shaped blob in the water near the man, the chase (and I use that term very loosely) became a “rescue operation” involving the U.S. Coast Guard as well as local fire and police units. The shark apparently decided not to eat him, and he was taken into custody at about 7:45 p.m., three-and-a-half hours after the traffic stop.

I’m pretty sure I couldn’t swim for three-and-a-half hours, but then if there was a shark nearby, the energy my fear generated would probably be enough to let me leap out of the water and sprint back to shore on the surface, or maybe cause the ocean to boil, generating steam that would propel me to safety like a terrified human Jet-Ski. But we’ll never know, because I’m not going out there in anything smaller than a destroyer.

TIP: To Avoid Seat-Belt Ticket, Seat Belt Must Be Attached to Car