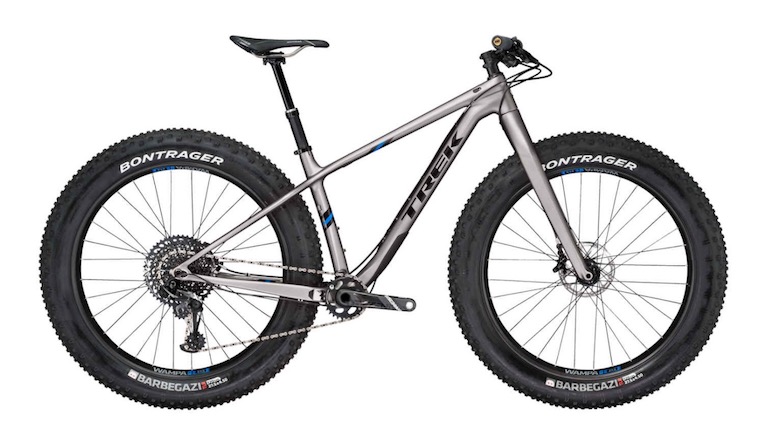 On September 11, a company claiming to own the rights to Chris Farley’s intellectual property sued Trek Bicycles, accusing it of misappropriating the late comedian’s identity to market its “Farley”-brand bikes. The plaintiff is Make Him Smile, Inc., of which Farley’s brother Kevin P. Farley is apparently the president. The lawsuit alleges that the “Farley” name was specifically chosen, without permission, for the purpose of marketing bikes that have, as the complaint puts it, “a wider than average chassis.”

Trek does indeed have a “Farley” brand, which comes in a variety of colors and prices ranging from $1,700 to over $5,000. Its chassis doesn’t seem particularly wide to me, but it does have a sturdy frame and big fat tires. Trek describes them as “fat bikes,” but that appears to be just a general term for any mountain bike with big fat tires. The complaint, however, alleges that Trek chose the name specifically for its association with Chris Farley, who, like the bikes, was fat:

Farley, who died in 1997 at the age of 33, was a native of Madison, Wisconsin. He was a world-famous comedian and actor best known for his portrayal of ‘fat’ and ‘loud’ characters on NBC’s Saturday Night Live and in various successful films…. For his entire adult life, Farley was overweight.

The name ‘Farley’ is now, and has been for nearly three decades, linked and associated with his persona and his identity as a fat comic actor willing to go into comic territories others would not seek to traverse.

[Trek knew Farley] was well known to the specific and targeted generation of consumers that tend to purchase Fat Bikes, and that by creating an association between the ‘loud,’ ‘fat,’ ‘Midwestern’ Farley and the Farley Branded “Fat Bike” Products, they would be able to attract the attention of such consumers who immediately recognized the Farley name and its association with ‘fat,’ ‘loud,’ ‘wide’ and ‘Midwestern’ goods and services.”

Well, this seems like a bit of a stretch. The similarities in name and relative fatness are indisputable, but so far as I can tell, the bikes aren’t particularly “loud.” And as for going into “comic territories others would not seek to traverse,” well, somebody was getting a little carried away there, I think. Do the bikes traverse comic territories? I suppose they could. Are they ever kept in a van down by the river? That might also be helpful.

The complaint also alleges that articles and reviews of the Farley bikes “routinely included statements” that the bikes were in fact named after Chris Farley. It doesn’t claim anyone from Trek made those statements, just that Trek has never sought to “correct the record.” I guess it’s possible you might infringe by ignoring a statement you know might confuse customers, but I don’t know. It’s better than the “loud” allegations, at least.

But what may be going on here is a dispute between neighbors, or former neighbors. The complaint alleges that not only is Trek a Wisconsin corporation, its CEO, John Burke, currently lives in Maple Bluff, Wisconsin, where Farley was born and raised. In fact, the complaint says, the Burke and Farley families “have known, and socialized, with one another over many decades, and both families simultaneously belonged to the same Maple Bluff Country Club.” (Emphasis original. Actually, it says “Plaintiff is informed and believes, and based thereon alleges” that this was the case, which is a little odd if the plaintiff is actually Kevin P. Farley, but then he is technically not a party.) This at least suggests the name choice wasn’t just a coincidence, but it’ll take more than that to prove infringement.

All this assumes that, in fact, Make Him Smile, Inc., really is associated with Kevin Farley and/or the Farley family. While Kevin Farley’s name is on a California registration form with that company’s name on it, the Hollywood Reporter noted in 2011 that the company’s claim to chrisfarley.com had been rejected because it “provided no evidence it received a valid transfer of Farley’s rights from his family.” Maybe it just screwed up the paperwork—or maybe somebody has misappropriated Kevin Farley’s identity for a misappropriation lawsuit. As is so often the case, time will tell. Or, it won’t.

“Lobster Gone Bad” Turns Out To Be Hoax

Shark to Be Installed In Lawyer’s Office

Teens Charged With Exploiting Themselves