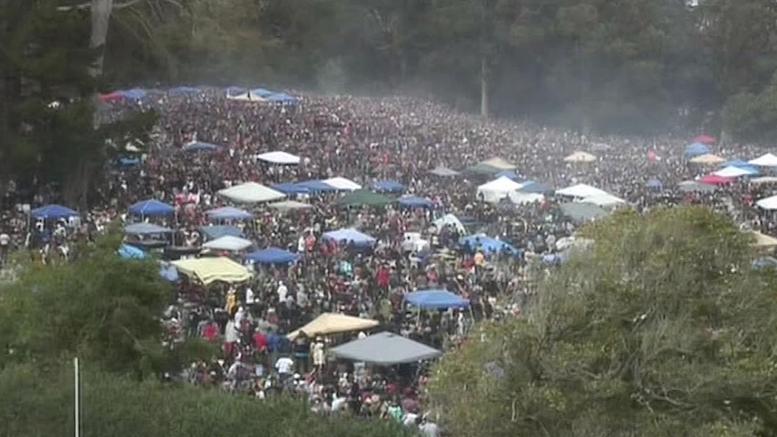 In July 2010, two police officers were patrolling Golden Gate Park here in San Francisco when they noticed someone standing in a place known as “Hippie Hill.”

It strikes me that I could probably just stop there.

And yet, I continue. This is not just a local nickname, or at least not anymore. “Hippie Hill” is the official name of the place. Having said that, it may not surprise you to learn that, apparently, the area is said to be known to law enforcement as one in which drug-related activity occurs. Indeed, our two heroes had made “numerous narcotics arrests there,” according to the opinion, although because the legal term “narcotics” ridiculously includes marijuana, make of that what you will. What? You located someone buying a joint near Hippie Hill in Golden Gate Park in San Francisco? Excellent work, Sergeant—or should I say, Detective?

So, they see this guy on the hill. It’s about 8 a.m. He is wearing gray pants, and a fleece jacket. He is also wearing running shoes. The officers notice the man has a “clean-cut look,” and is “by himself, not talking to anyone, [has] nothing in his hands, and [is] not doing anything specific to arouse suspicion.” But the officers later testified that they thought he looked “worried,” and so they “decided to initiate a consensual encounter” with this citizen.

This is something that police are free to do, just like anyone else can. It may seem (and certainly sounds) a little ominous, even if it’s not Roy Moore doing it. But the Fourth Amendment isn’t implicated unless someone’s actually being “detained.” It is not always clear, of course, that you are free to walk away, so sometimes it depends. But you are, in fact, free to walk away from a “consensual encounter” with police. You are also free to run away from it, although that really may not be a good idea.

But that’s what happened here. Twice. On the hill, the man “looked back briefly in their direction and then began running. With their suspicions aroused,” the officers decided to pursue. They called for backup. They set up a “perimeter.” They saw the now-suspect individual take off his jacket, which they interpreted as an attempt to change his appearance and evade them. They followed him down what they described as a “dark trail” that had a “cave-like appearance.” One of them drew his gun, “not because of any specific threat, but because of ‘fear of the unknown.'” Eventually, they encountered the suspect, now walking. One shouted at him to stop, and said “I will shoot you!” He ran.

The opinion doesn’t say, but I’m going to speculate that the suspect was white, because he is not dead.

The man later testified that he was just out running when he paused for a rest on the hill, and then continued his run without any inkling the police were now in hot pursuit. He took off his jacket because he’d been running for an hour and was hot, not because he was trying to escape. (A fleece jacket in July!? July in San Francisco, genius—it was 62 degrees, and at 8 a.m. in GGP almost certainly foggy.) Did he run when he heard somebody yell “I will shoot you”? He sure did. But he surrendered peacefully when he encountered another officer on the “perimeter.” They found no contraband on him, in his jacket, or in his car, which was parked in the area. They did, however, find a gun in the car.

He had a gun because he was a police trainee.

In one of the more humorous judicial footnotes I’ve seen recently, the court noted that although one of the officers testified the man’s “clean-cut look” was “consistent with someone who was a recent parolee,” on cross-examination he “admitted [the man]’s appearance was also consistent with that of a recent graduate of the police academy.”

Anyway, notwithstanding the complete lack of evidence and the fact they had just detained a police officer (trainee), they arrested him. A blood sample showed no trace of “narcotics.” But, after six hours in custody, he was cited for “resisting or delaying an officer” (!) and then released. Two days later, he was fired for “misconduct,” thus “ending his career as a San Francisco police officer and effectively disqualifying him” from any other law-enforcement position anywhere.

Lawsuit? Oh yes. Trial? Yes. Verdict? For the plaintiff. Judgment? $575,000, plus $2 million in attorney’s fees (awarded under a state civil-rights statute). Appeal? Sure, why not.

But the Court of Appeal had little trouble finding that the officers had no “reasonable suspicion” to detain the guy in the first place and no probable cause for an arrest. While some of the facts were disputed, and there were a couple of oddities about those facts, it seems about as clear as it ever gets that there was no probable cause here. That’s what the jury found, after all. (As the court put it, the jury believed the officers were “embellishing.” I personally enjoyed the “cave-like appearance” of an outdoor trail in Golden Gate Park during the daytime.)

And even if he knew the police were there, the court pointed out, he was entitled to walk away, or even to run, because “not every effort to avoid an encounter with police warrants detention.” (Or death, the court happily did not need to add here.) The court summed it up pretty well by saying that “Officer Brandt chased down and trained a weapon on a running man about whom he knew virtually nothing except that this was someone who had the temerity to try to elude capture.” Now the city is $2.575 million poorer. (I guess I have to help pay that now, but fine.)

In short, the guy shouldn’t have run, but running ain’t probable cause. Sometimes, it’s just jogging.

Note to Self: No Grocery-Store Carjackings This Holiday Season