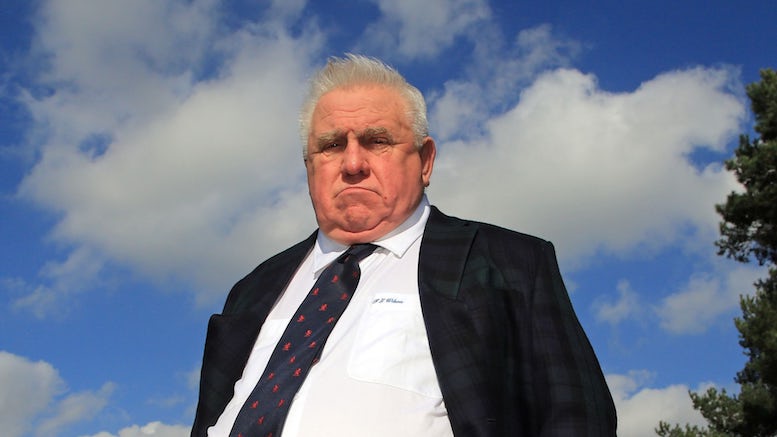 Something smells funny, at least (image: The Guardian)

In March, the UK’s Equality and Human Rights Commission said it was looking into a report that Fergus Wilson, described by The Guardian as a “property tycoon” and “Britain’s biggest buy-to-let landlord,” was discriminating based on race. This was largely because Wilson told his agent in an email that he wanted “no coloured people because of the curry smell at the end of the tenancy.”

The Guardian reported today that a judge rejected Wilson’s argument that he was only joking.

This was a “joke” that Wilson kept telling, it seems, even after the email came to light. In fact, he told the funny joke to EHRC itself when it investigated. “I refuse to take tenants from a group of people that produce curry smells,” he told it. (Oh, so any people who produce curry smells are—) “I take just about anyone except Pakistanis and Indians,” he continued. (Never mind.) He also told it in the media. “To be honest, we’re getting overloaded with coloured people,” he told the Sun newspaper. Wow, that sounds racist, but then he followed up with the curry punchline: “It is a problem with certain types of coloured people—those who consume curry—it sticks to the carpet. You have to get some chemical thing that takes the smell out. In extreme cases you have to replace the carpet.” I don’t know if that’s even possible—I’m no expert, but I don’t think you use curry by pouring it on the carpet—but again, the problem with the curry explanation is that Wilson never denied he refused to rent to “coloured people,” not just anybody who uses a lot of curry.

Strangely, though Wilson is believed to be worth (in monetary terms) as much as £250 million, which these days is a lot of money, he was apparently too cheap to hire a lawyer for the hearing. He represented himself, and not surprisingly, “was repeatedly admonished by the judge for bringing up issues that were not relevant to the case.” But he also brought up issues that were relevant to the case, given the relevancy of whether he is a racist, because they tended to show that the answer to that question is yes.

For example, the judge did not believe Wilson’s claim that these were only jokes partly because he also argued he was not joking: “Wilson’s defence ranged from asserting that the email containing the ban on ‘coloureds’ was just a joke and banter with a young letting agent, through to defending it on behalf of all landlords.” (Emphasis added.) A lawyer would likely have advised him that, if he planned to argue he did not intend to discriminate, he should not say at the hearing that he believed all landlords should discriminate in the way he had.

Another example: Wilson argued that those in the group he banned would not be able to get rent-guarantee insurance, because the insurers also did not want to do business with south Asians. “The reality is,” he told the judge, “that with some of the rent insurers, if your name is Patel, you won’t get [insurance] as you are more likely to claim on it.” Again, a lawyer might have said, “You know, Fergus, arguing that other people are also racist doesn’t help show that you are not racist. In fact, the other side could argue it supports the view that you are.” This is the sort of thing we get paid to do.

But then Wilson would likely have lost anyway. “This policy clearly amounts to discrimination,” the judge held, and “has no place in our society.” The judge ordered him to lift the ban, and Wilson said he wasn’t sure he would appeal. Not because he was wrong, though, but because “I’m retiring soon.”

That’s good for other reasons too, because judging by The Guardian’s reporting, Wilson is a real peach of a human being in general. In 2009, Wilson—who, again, is said to be among the wealthiest men in the UK—sued two tenants for £3,000 because they broke a toilet-seat lid. (He apparently wanted them to pay for a whole new bathroom suite, but a judge threw out the “exaggerated” claim.) In another charming example, Wilson “is said to have barred domestic violence victims from renting his homes, as he reportedly claimed that jealous or angry partners would cause damage by kicking down front doors and punching holes in the interior.” He is also said to have barred at various times, among others, families with children, single parents, and single adults—all of which would also be illegal discrimination under at least some laws—and plumbers. Plumbers? Plumbers.

Even more oddly, he has a hobby of writing and self-publishing children’s books (which is not odd) and alternative-history books that tend to feature young girls mating—willingly and otherwise—with SS officers in a Britain that lost World War II (which really kind of is). At least in such a world the plumbers could be dealt with once and for all, but otherwise it seems kind of weird.

I only read part of the preview of “Hilda’s War,” but like the rest of Fergus Wilson’s work, it doesn’t seem funny at all.

We Regret the Error