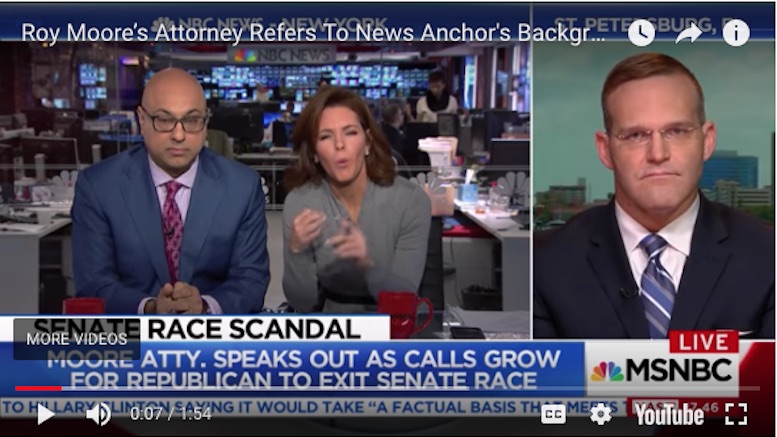 Trenton Garmon (right), who has also embarrassed himself on national television

People are suggesting I write about Roy Moore’s lawyer’s threat letter. Write what? How would I begin? Would you footnote a sunset over the water? Would you airbrush a rose? That letter is the Mona Lisa of unselfconscious imbecility.

As usual Ken makes a good point, but I’m the kind of person who would footnote a sunset, and I  also feel the need to make sure this letter is in my archives somewhere.

It is, though, hard to know where to begin.

So let’s start with Roy Moore’s lawyer’s client. Roy Moore, you may have heard, is still running for the Senate despite fairly well-corroborated allegations that, among other things, he had issues with the age of consent in a state where that age is 16. But then that is a rule of law, and if there’s anything Roy Moore has had an unpleasant and unwelcome relationship with, it’s the Rule of Law.

Remember, this is a guy who was removed (twice) by his own colleagues on the Alabama Supreme Court for that reason: he not only refused to follow U.S. Supreme Court decisions, he ordered other judges in that state to do likewise. This is not how the Rule of Law works, and Moore’s obvious eagerness to take a dump on it whenever possible should have been enough to disqualify him from any further public office, even without the current allegations. But now there are those, too.

This post isn’t about those allegations, but I will say Moore didn’t do himself any favors by offering, as a defense, that “I don’t remember ever dating any girl without the permission of her mother,” thus basically admitting he dated girls who still needed permission.

He also did himself no favors by hiring Trenton Garmon to write a scary threat letter to the Alabama Media Group (al.com), attempting to scarily threaten it with … something … for acts the letter suggests are defamation, or at least what a lawyer who doesn’t know anything about defamation or the First Amendment might think are defamation. (Selecting Garmon as a public spokesman was an even worse idea.) And, as numerous sources have pointed out (e.g. Slate, Above the Law, and of course @Popehat), it would also help in terms of scariness if the letter’s author knew something about grammar.

So, where to begin? How about the first page, at the top? 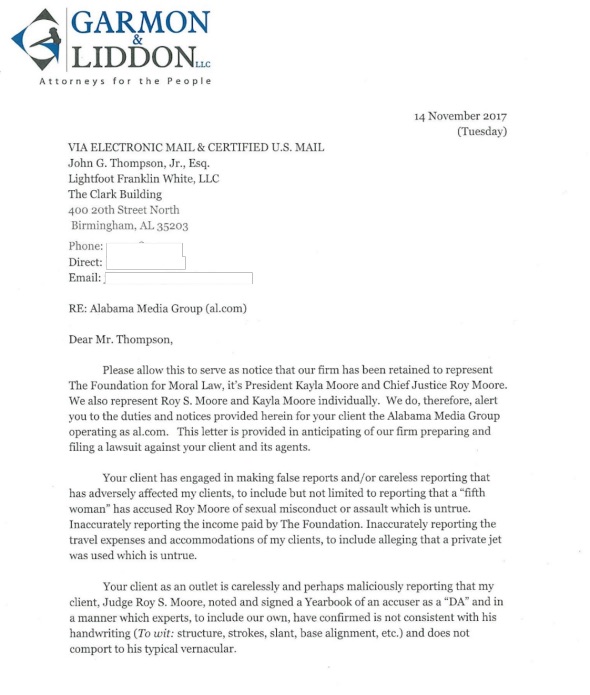 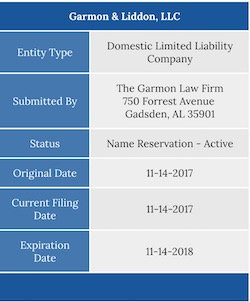 The firm’s not exactly well-known for its expertise in this area. It’s not even well known for its name. It’d be more accurate to say that it’s not sure what its name is. The letter says “Garmon & Liddon, LLC,” but the website says “Garmon Law Firm LLC.” A “Flint Liddon” is also listed there, but both Liddon and Garmon are also listed on a “Liddon Law Firm” page. But, okay, maybe they are in the process of joining up and creating a new firm. Fine. Technically, they should have waited to use the new name until after they actually formed the LLC, though, which according to Alabama’s records, they have not yet done. (Interestingly, Garmon reserved the name on November 14, 2017—the same date as the letter.)

Everybody has an issue with something, and for some people this is it. I know really intelligent people who get this wrong all the time. So if this was the only problem with the letter, we’d let it slide.

It isn’t even the only problem with the first sentence.

Roy Moore isn’t “Chief Justice Roy Moore.” He was that, but he no longer is, because he was kicked out for violating Alabama’s Canons of Judicial Ethics, including Canon 2, “A Judge Shall Not Dump Upon the Rule of Law.” There is some disagreement about whether a person can go around using a title he or she no longer holds. I’m not really sure why that is, since HE OR SHE NO LONGER HOLDS IT and so it’s potentially deceptive. But even if you think a former judge or senator or whatever should be able to do that generally speaking, surely that should not apply to one who had the title removed for misconduct. I guess the sentence could be read to imply that Moore is Chief Justice of the “Foundation for Moral Law,” not of a court. But then it would just be false.

The concluding sentence of that paragraph, “[t]his letter is provided in anticipating [sic] of our firm [suing you],” is not just badly written but almost certainly empty bluster, for a couple of reasons. First, because Moore is a public figure, he would have to prove “actual malice” in order to win, which is extremely difficult. Second, and more importantly, if Moore sued over these allegations the defendant would be entitled to discovery in order to investigate whether the allegations are true. Moore certainly does not want that.

Okay, having looked over the rest of the letter again, I now realize just how sensible Ken’s approach really was. There is so much more badness in this letter than I could possibly point out within my self-imposed 1000-word limit, and there are still three pages left. Let me just highlight this paragraph, which might be the worst of the horrible lot:

These are not the kind of sentences that strike fear into an opposing party. They are the kind that make opposing counsel hoot with laughter.

Here’s the rest of the letter, so you can appreciate the sunset at your leisure. 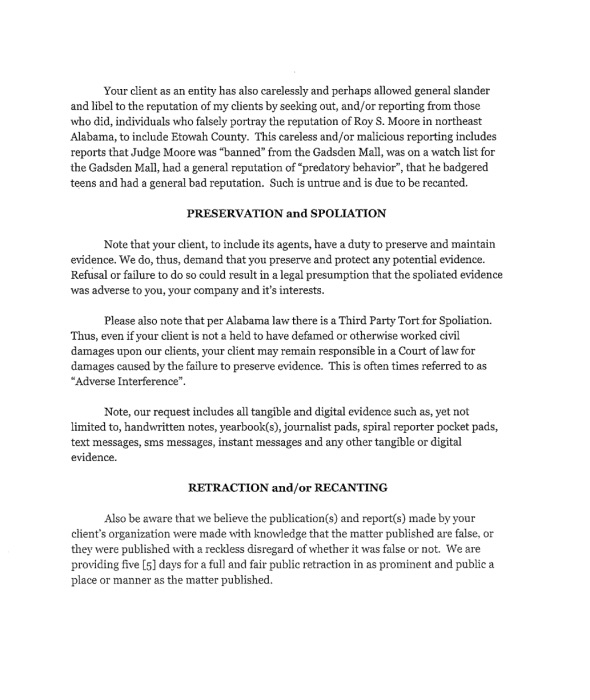 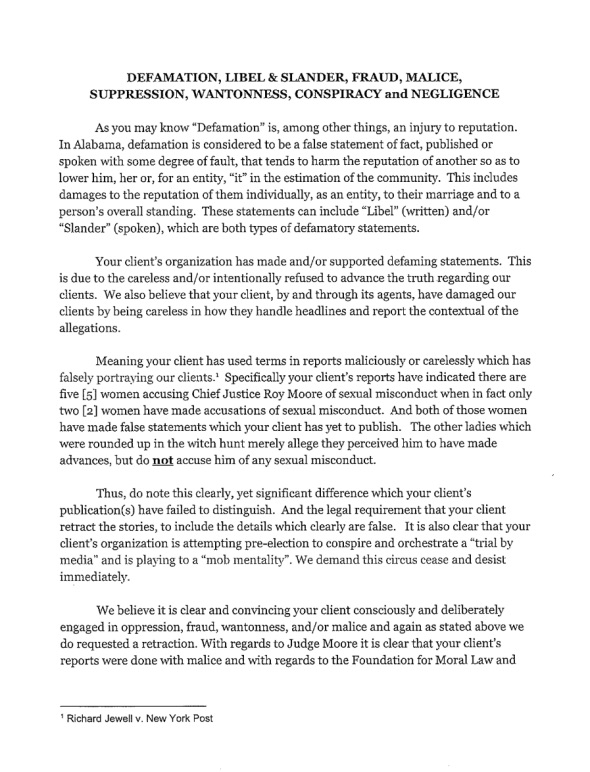 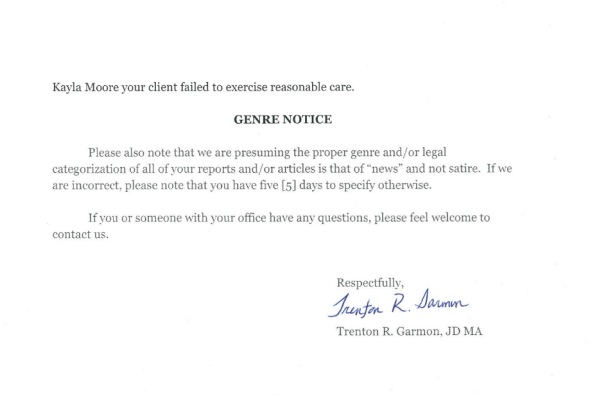 Southerners Fear War Between the States

“I No Longer Do,” Japanese Couples Say in Divorce Ceremonies