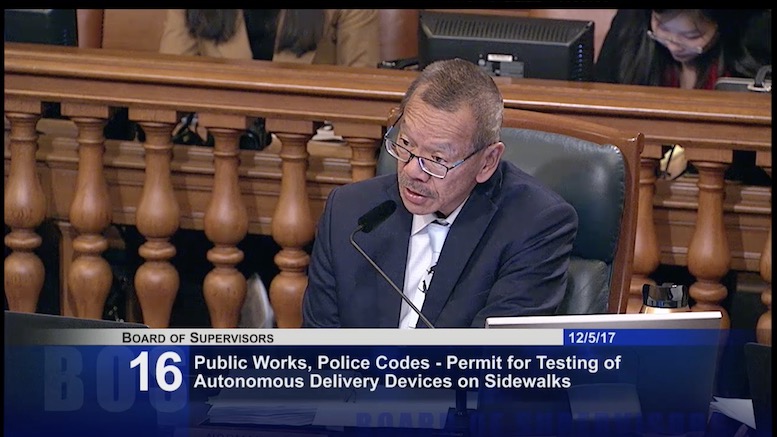 On Tuesday, San Francisco’s Board of Supervisors voted to sharply restrict the use of delivery robots on city sidewalks. With only minor exceptions, in fact, the new ordinance bans these devices entirely.

Experts believe this to be only a temporary measure, largely because the hearing concluded with the disassembly and replacement of the existing carbon-based supervisors by gleaming new legibots.

First on the list of troublemakers was Supervisor Norman Yee, who initially proposed the ban a few months ago. (He is—or was—no relation to former state senator Leland Yee, the guy responsible for a law attempting to ban “violent video games” who later pleaded guilty to illegal arms trading.) Yee repeated on Tuesday that although not many deliverobots had been deployed in San Francisco yet, he believed humans needed to act before it was too late.

“Maybe 5 years from now,” he said at the hearing, “when we have 20,000 robots roaming around on the streets and people have to walk on the streets with the cars, maybe then we’ll do something? … I don’t want to let things get out of hand.” He did not explain why he believed it would take that long for the robots to take charge, or why they would permit people to continue to use their streets at all, for that matter. Or why they would permit people. 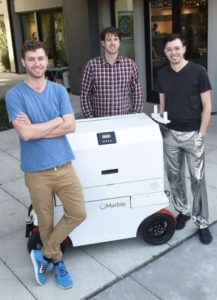 As sources including Wired and TechCrunch have reported, a few startups have been experimenting with what they insist on calling “autonomous delivery devices” in San Francisco and other cities, mostly delivering food at this point. In April, Wired described how the company Marble is testing bots that use cameras and lasers to navigate through the Mission district, or to try to, anyway. (At the moment they still have to be accompanied by a human monitor, although before too long “human monitor” will have an entirely different meaning.)

As you can see here, at least one of the company’s officers has already been at least partly assimilated by the collective. There’s some dispute about this image, but you can’t tell me an actual human person would willingly wear silver “pants” like that in public. It’s already happening, people. Wake up!

Yee’s original ordinance would have flatly prohibited the use of any such device (specifically, any motorized device used to transport something “without a human operator sitting or standing upon and actively and physically controlling the movements of the device,” which does sort of defeat the purpose) on any public sidewalk or right-of-way in San Francisco. But the final version backed off from that, after some pressure from the autonomous-delivery-device lobby, and instead allows robotic delivery to continue on a limited basis for the purpose of “research and development.” It will still be unlawful to operate an autonomous delivery device (to the extent that makes any sense) without a permit.

Only three permits can be active at any given time, and each permittee can operate no more than three robots at once. So, for now, nine active robots is our limit, supposedly. (There are only 11 districts in the city, so the Nine will still have a supermajority even if they honor the district lines.)

The ordinance purports to require the bots to meet certain “operational requirements” for “testing purposes.” Among them:

This last one especially is wishful thinking, for at least two reasons: (1) the first or second thing these will be used for is to deliver highly flammable marijuana, and (2) lasers don’t use ammunition. Nice try, though, humans.

There must, of course, be a public hearing regarding each permit application, with at least 10 days’ notice to be given in advance of any such hearing. I, for one, will certainly be attending, either just to observe or be among the first to heap praise upon our new robot overlords, depending on how things go.

Jury Finds Florida Man Was Not “Too Fat to Kill”