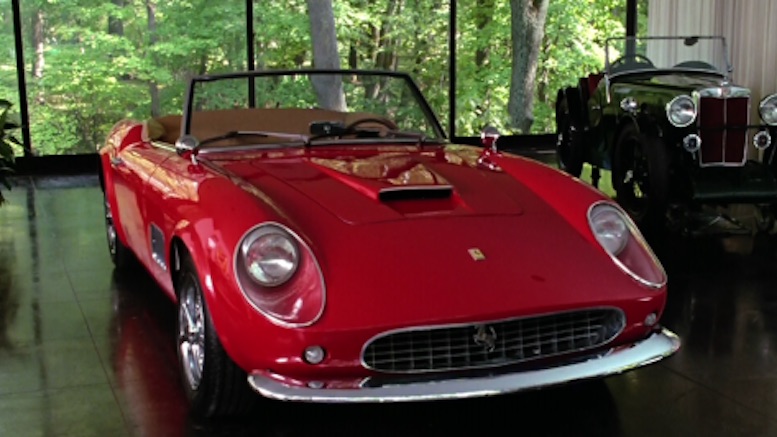 "Would the police have been free to enter the Fryes' glass garage without a warrant?"

As Lawrence Hurley reported this morning, and as the transcript now confirms, the Chief Justice mentioned Ferris Bueller this morning during oral argument. That appears to be due to an excellent amicus brief by Mahesha Subbaraman.

Not only is the brief well-written, and not only does it mention Ferris Bueller’s Day Off, it includes this image of Cameron’s dad’s garage: 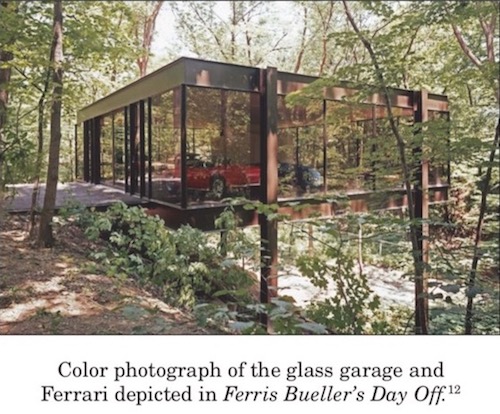 It’s even relevant to the argument, so that’s a briefing trifecta at least.

The case, Collins v. Virginia, involves a search for an orange-and-black Suzuki motorcycle and, of course, its rider. Someone riding such a bike had eluded police twice (its ability to travel at 140+ mph being a large part of that). The second time, the officer’s dash cam recorded the bike’s plates, and that led them to its previous owner, who admitted the bike was stolen but said he had sold it to Collins before the aforementioned eludings (and that Collins knew it was stolen). Following up on that, police found, among other things, pictures on Collins’s Facebook page depicting what appeared to be the same motorcycle. Questioned about this, Collins denied knowing anything about either the bike or the house where it was parked. After locating the house, an officer observed from the street that there was indeed “what appeared to be a motorcycle covered with a white tarp” parked in the driveway.

For those and other reasons, it seems pretty clear that there was at least probable cause to believe this was the bike he was looking for. The question is what the officer should have done next. What he actually did was—without getting a warrant—walk onto the property and remove the tarp, revealing an orange-and-black Suzuki motorcycle. Collins was later convicted of receiving stolen property.

The Court of Appeals held the warrantless search was justified under the “exigent circumstances” exception, which is the one that comes up on Law & Order if they think somebody inside might be in trouble (or they think a judge would believe they thought that). The Virginia Supreme Court reached the same result for a different reason: it held the search was justified under the “automobile exception.” Under that exception, police can search a vehicle if they have probable cause to believe it contains contraband, the theory being that vehicles can be easily driven away so there would be no time to get a warrant. Here, though, the parties debated whether that exception applied to a vehicle parked on private property. The majority held that it did, citing a federal case in which police had searched a vehicle parked in a driveway and found contraband. Here, too, the majority said, the officer conducted a vehicle search and found contraband. Accordingly, “we hold that Officer Rhodes’ search of the motorcycle was permissible under the automobile exception.”

Wait a minute, a dissenting justice wrote. There was no search of the motorcycle. It was a search for a motorcycle. “The motorcycle did not contain contraband, it was contraband; Officer Rhodes did not search the motorcycle, he searched the tarp.” The state might have been able to rely on what Rhodes could see from the street, he argued, but the “automobile exception” doesn’t apply and so the officer couldn’t look under the tarp without a warrant.

The U.S. Supreme Court took the case to decide whether the automobile exception applies. I would probably be inclined to agree with the plaintiff, but can see both sides of this argument. The point here, though, is really to talk about a brief that managed to get Ferris Bueller involved, so let’s do that.

Writing on behalf of Restore the Fourth, Inc., Subbaraman (as you can probably guess) agreed with the dissenter: this wasn’t a search of a vehicle, it was a search for a vehicle, and the automobile exception doesn’t reach that far. The end result, he basically argued, would be to create a “garage exception”: if they can look under a tarp on your driveway without a warrant, what’s to stop them from looking inside your garage based on the same rationale? They should have to get a warrant for that.

Subbaraman’s first argument is that the Founders would have said this required a warrant, and he managed to dig up a couple of cases involving horse thieves, so that’s good. Second, he said, a “garage exception” would erode Fourth Amendment protection for the home. There is no material difference, he wrote, between removing this tarp without a warrant and, for example, opening a shed because you can see a vehicle through a gap in the doors, or lifting a closed garage door because you can see a vehicle through the window.

“A popular film,” he continued, “affords a vivid way to appreciate this point”:

In Ferris Bueller’s Day Off, protagonists Ferris Bueller and Cameron Frye decide to go for a joyride in a 1961 Ferrari 250 GT California owned by Frye’s father. The Ferrari is parked in the Fryes’ home garage: a spacious room surrounded by large glass windows overlooking a ravine. [See image above.] Bueller and Frye succeed in taking the Ferrari, but in the course of returning it, Frye accidentally causes the car to crash through one of the garage’s glass windows and fall into the ravine below. Assuming a movie in which this accident had never happened—and one in which the police were engaged in an active investigation of a stolen Ferrari—would the police have been free to enter the Fryes’ glass garage without a warrant so long as they had probable cause to believe the Ferrari was located there?

Again, I guess you could fairly take either side of that argument. The point here is really that interesting examples and images, which are both too rarely used in legal writing, help get a reader’s attention. And this example obviously did that:

Well, it was a Ferrari, but still.

A Pistol in the Pants Can Lead to Trouble

Post-Traumatic-Internet-Addiction Claim is Back in the News

Reckless-Driving Acquittal Again Shows Proofreading Is Not Just for Dorks