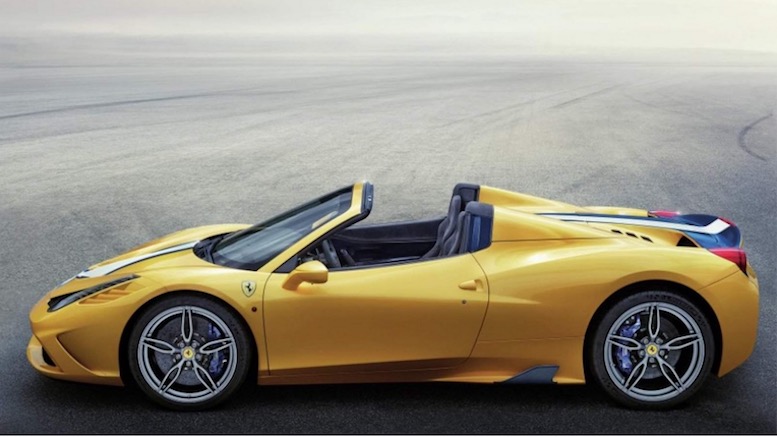 I’m sure that, like me, you hate it when the valet doesn’t bring up your Ferrari tout suite when requested. Did we not make America great again so that this kind of thing would stop happening? Well, evidently it is not yet sufficiently great.

According to the Tampa Bay Times, a recently filed lawsuit—filed by a senior partner at a law firm in Florida—accuses Marriott International and a parking company of negligence and gross negligence (which is like negligence, but worse) for improper Ferrari handling last July. To be clear, though, he is not suing for insufficiently rapid retrieval.

He is suing because they gave the keys to the wrong guy.

According to the report, the partner’s yellow 2014 Ferrari 458 Italia Spider—a $300,000 car—was parked in front of the Vinoy Renaissance St. Petersburg Resort and Golf Club on the evening of July 27. Around midnight, the valet later explained, at a very busy time, a man and woman asked for the keys. The man was “impatient” and “demanding,” according to the police report, and so, you may be thinking, fit the profile of a Ferrari owner. The man told the valet he had left the ticket inside the car and would bring it back, and apparently convinced by his demeanor the valet handed over the keys. But the couple sat in the car for “quite a while,” long enough that the valet said he stopped paying attention after he “figured he was not getting a tip.” (He was right, but not for the reason he expected.) The car drove away.

Coincidentally, police stopped a yellow 2014 Ferrari 458 Italia Spider about half an hour later, because the taillights weren’t working and/or because the driver was having “difficulty” driving. The driver, a 28-year-old man, told the officer he was driving his dad’s car, and that he thought the taillights had been fixed. He admitted they had come from the Vinoy but said they were heading back there right at that very moment.

He also denied knowing anything about the cocaine on the center console.

Eventually, he admitted the car wasn’t his, but insisted he had not stolen it. “The vehicle and keys were given to him by [the] valet,” according to the police report, “so technically he did not steal the vehicle.” A defense far more likely to be viable is his claim that although he did indeed take it, he planned to return it. He may or may not be able to convince anyone of that, but it does seem plausible that this was a spur-of-the-moment (and possibly alcohol- or cocaine-fueled) joyride, not an intended theft.

His 24-year-old companion’s testimony might support that, or it might not. She said they had just met that night, and that he had offered to drive her home. They had supposedly been on the way to get her car at the Vinoy when he asked the valet for the keys to the Ferrari parked out front. She also noticed he was having “difficulty” driving the vehicle, not necessarily due to intoxication, but more that he “didn’t seem to know how” to drive it. This didn’t trouble her, she said. According to the police report, her attitude was more or less “I’m in a Ferrari, this is nice.”

The 73-year-old senior partner who owns said Ferrari was, apparently, less amused. It isn’t clear what if any damage was done to the car, but the Times quotes the complaint as alleging he was required to “spend significant sums” on inspections, repairs, and legal fees as a result of the defendants’ negligence (or gross negligence) in handing over the keys.

Parking it right in front of the hotel where it could be viewed by potential date-impressing joyriders might be seen as contributory negligence, but it probably depends on the jury.

In a completely unrelated point, one of the “trending headlines” at the bottom of the Times article is, “Florida is the worst state in the nation in every way, rankings say.” I don’t even need to read that article to know it’s not credible, though, because Mississippi.

Court: No, It Wasn’t “Reasonable” to Lock Grandma Up With Male Inmates

DOJ: Opponent’s Use of 12-Point Font “Prejudices the United States”